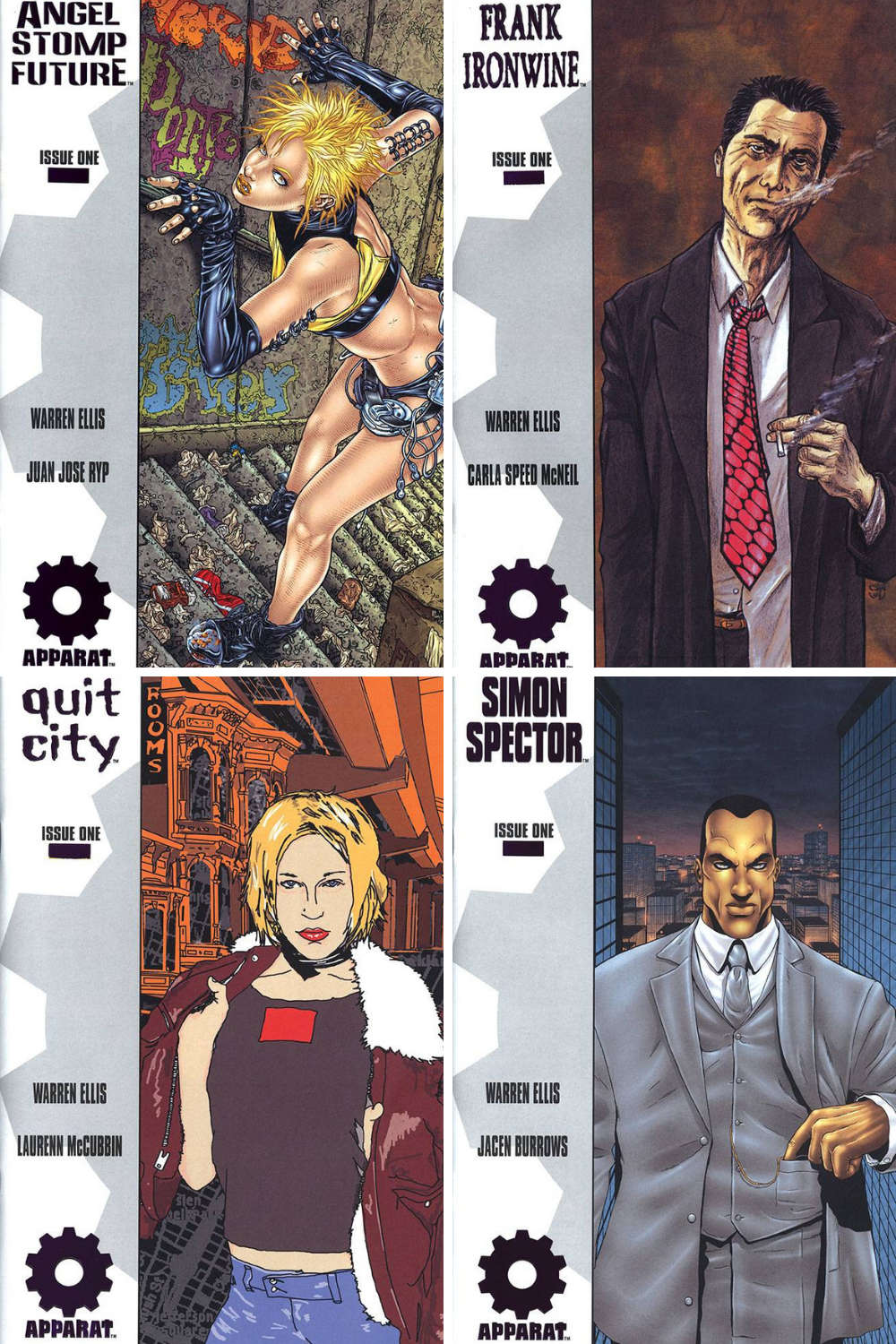 The Apparat line of comics was Warren Ellis writing a set of one-off issues of comics based on the idea that superheroes didn’t exist in the publishing world. See here for the official site, which includes some information from Ellis and the covers.

Frank Ironwine
Ellis likes his emotional detectives; the debauched individual who gets deep into the heart of the crime because that’s their job and they are very good at it. This stuff reminds me of the Derek Raymond novels, which isn’t surprising as I only read them after they were recommended by Ellis in the first place. Our hero is a bleak, crumpled old man but with a poetic soul, even though he’s up to the stomach in man’s inhumanity to man. Art from Carla Speed McNeil is a little scratchy for my personal tastes, but she gets to the heart of the story and brings the reader into it as well.

Simon Spector
This could easily work as an ongoing, so it’s a shame it won’t be, as that would defeat the object of the exercise. This is pure pulp action, with guns blazing and people being rescued and individuals trained to perfection and drugs, reminding me of Doc Savage and the Shadow, but there are plenty of others in the mix. Jacen Burrows is an excellent Ellis accomplice, and I agree with Greg that it’s a crying shame that he isn’t doing more high-profile work. The ballet of violence is exquisite and the drug-fuelled connection of clues is very nicely done by both writer and artist.

Quit City
This is a quiet tale which could easily exist outside the conceit of the Apparat idea, as it doesn’t touch on the aspect of aviation which it implies. It’s more about not interacting with the pulp genre that it is in, and the story, of a former aviator coming home and meeting the ghost of the boyfriend she ran away from in the first place, reminds me of his Hellblazer stuff more than anything. The art by Laurenn McCubbin is more light and collage-y than normal for an Ellis book; she is a talented artist, but the looseness of the work seems at odds with the constraint of panels and page-to-page storytelling, but she creates a fully realised world that many comic book artists unfortunately don’t.

Angel Stomp Future
Aaah, the Ellis sci-fi stuff; his home turf. You know you’re in for fun when the first panel has “Speculum Bar – where warm drinks are mixed in and served from the muscular rectums of young Algerian girls”. This has all the strangeness of the real world filtered through Ellis’s warped brain and twisted just a little more for our viewing pleasure. The lead character is a strong Ellis woman; smart, lippy and doesn’t take any shit, but still a little damaged. I’d love to know more about this character. Juan Jose Ryp is fantastic on art duties – like Glen Fabry crossed with Geoff Darrow – wonderfully detailed and deranged, and I wonder if the gag about the retroactive abortion booth was the script, artist or both. Reminds me why I miss Transmetropolitan (Ellis’s best work in my opinion) so very much.

An interesting experiment from Ellis, making you wish other mainstream creators would do something similar.

From A Library – Wolverine: Agent of SHIELD