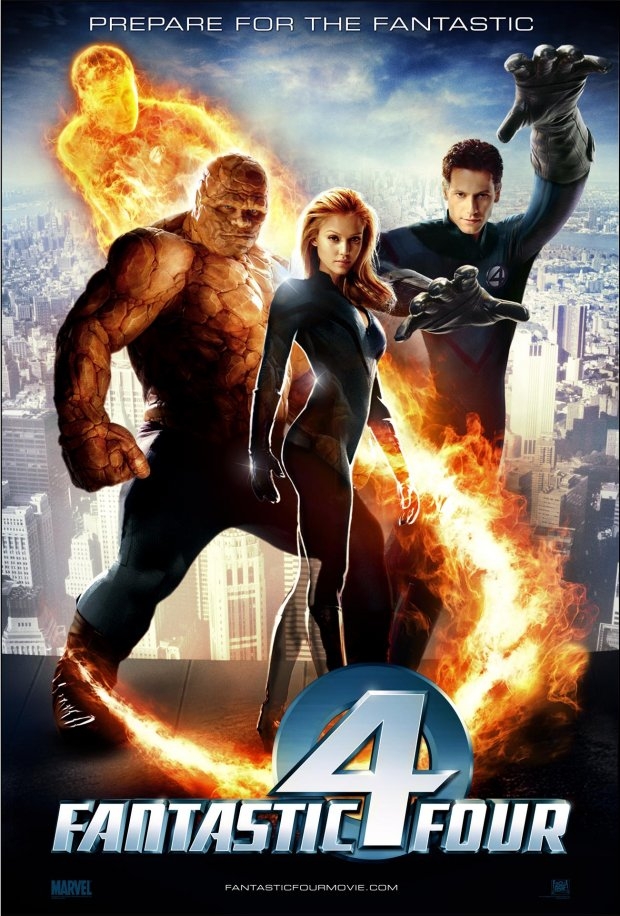 Confession: I haven’t read any of the Stan Lee and Jack Kirby Fantastic Four comics. Sorry. They were made before I was born and the only way to see them is expensively in colour or cheaply in black & white, and I don’t ‘get’ Kirby’s art. This is probably heresy and I apologise, and can only hope that I am still allowed to write about comics on this blog when I haven’t even seen a single issue of what I’ve heard tell is one of the best runs of super-hero comics around.

Nevertheless, I have read some Fantastic Four comics. I’ve got John Byrne’s rather good run from before he turned into a bit of a nutter. I really enjoyed Walt Simonson’s run, which had the sense of the fantastic about it. One of my favourite stories involving the FF is the Fantastic Four/X-Men mini-series by Chris Claremont and Jon Bogdanove, which might make me even less suited to review the film, but it gave me a sense of what they are about as characters and wanted to see them on the silver screen.

And, for the most part, they do look okay in real life/CGI; the little kid inside me had a big smile on his face seeing the Fantastic Four in the flesh. The Thing still looks a little like a man in a suit, instead of the massive monster he should be – the CGI for the Hulk is more towards my personal idea of what Ben Grimm should look like, a giant creature, taller and wider than a normal man – but it comes off quite well when it could’ve looked completely awful. And I did like the little rocky noises they put in when you hear him turn his head in close-up. The invisible aspects have already been done, and fire has been created by CGI before, but Sue and Johnny looked okay as well. Although I love the character of Reed Richards, mainly for the fact of him being a scientist, his powers have never done anything for me, and I always felt a bit sorry for him with his superelasticity (obvious porno jokes aside).

The story was a little flimsy, however, which took away some of the enjoyment. It was as if they couldn’t quite make up their mind on how much of the comic to have and which bits to leave out. Let’s have Doom as an old associate of Reed, but let’s ignore every other thing about his history, thus removing most of the complexity and danger from the character, and have him as a corporate shark. Jessica Alba as the Director of Genetic Research was laughable; I have worked in science and I have never seen anyone like that in any place I’ve been, ever. Well, except for my gorgeous girlfriend, but she never wore a power suit.

Why increase the pathos of Ben Grimm even more, as if it needed it, by having the girlfriend who goes out in the middle of the street in the middle of the night in small and sexy night attire? I wouldn’t mind but, by the end of the film, he’s seemingly happy with being the Thing and getting cosy with Alicia – talk about a condensed history of Thing stories: ‘I hate being the Thing, I am sad and ugly and break bar stools. Hooray, I’m not the Thing anymore. Oh no, I must become the Thing again using untested technology that I don’t understand that doesn’t come with instructions. And I somehow end up wearing the stretchy uniform that I said I wouldn’t wear and am now happy with being an ugly Thing, even though I’m not sure I’ll be able to have sex with the hot blind girl I’ve just met.’

I don’t know if the more-simple narrative could appeal to a viewer like myself with more knowledge of the comics than the average punter, but it does seem they didn’t want anything too challenging to get in the way of the advertising and merchandising. From panning down at the entrance to the biking event, just to take in all the banners for Pepsi and Burger King, to flying through Times Square specifically stopping at big ads when Johnny flies through, or the completely gratuitous seeing-the-crowds-outside-the-Baxter-Building-via-a reflection in Johnny’s sunglasses, with special attention to the brand name on the front of the lens (especially as it’s stealing from Scorcese’s Casino). This is a very light, easy-going adventure, where super-powers are controlled within a few minutes of getting them and the crowds love them because they are so nice. Perfect for kids and for people who never read the stories before.

However, with the diminishing of the Doom character to nothing more than a shadow of his real self, they’ve weakened the story by having a weak villain; as Kirby himself said, the heroes are only as good as the villains they are fighting. What’s more, Doom is the main FF villain; if he’s turned into a bland baddie, what about the rest? And who are they going to choose for the next villain? This fluffy version of the FF, and the more-realistic approach to heroes in general, mean that the whole ‘Fantastic’ part is missing, and the stories that worked the best were when the truly imaginative, wild and crazy ideas were thrown at them.

In fact, I don’t know if the FF don’t work best in comic books, full stop, where there is the room for the spectacular and amazing, and makes me nervous by the inevitable sequel. The FF need something to define their goals for the purpose of a traditional Hollywood narrative; whereas the X-Men are any minority fighting against oppression, Spider-Man has the maxim ‘with great power comes great responsibility’, Batman has the mission to stop what happened to him happening to anyone else, the Fantastic Four don’t have that easily grasped hook, mainly because they were vehicles for stories where anything can happen, and that is not something we will see in a sequel from Tim Story, a pedestrian, bland and visually uninteresting director.

There was some fun to be had in the movie; Johnny had all the good lines, and the interplay with him and Ben was very nice, and there was the sense of them being a family. The actors were okay, especially Chris Evans and Michael Chiklis, but Ioan Gruffudd and Alba never really made me believe in their relationship, and Julian McMahon was rather limp as Doom. Basically, this is a fun super-hero romp but it could have been something more. Maybe the sequel will fulfil on the promise.

Contemplating Back To The Future and It’s A Wonderful Life

Notes On A Film: Whiteout

Notes On A Film: The Old Guard