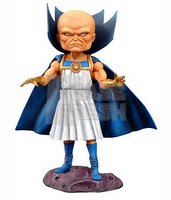 Uatu is a Watcher, a member of a powerful species of immortals who have sworn to passive observation of the universe. Uatu watches our solar system, from his home on the Moon, only occasionally breaking his code of strict non-interference. He would like to reinforce the fact that he is NOT a pervert.

What is your perfect idea of happiness?
Guilt-free voyeurism.

Which living person do you most admire?
Reed Richards. He’s just … fantastic.

What is your greatest regret?
I have a few, as detailed in the court case with my people, but the settlement means I’m not allowed to discuss it, I’m afraid.

What is your most treasured possession?
A replica of the Ultimate Nullifier, signed by Reed Richards and Galactus.

Where would you like to live?
The Baxter Building, but the Blue Area suits me just fine.

What makes you depressed?
The fact that togas are no longer fashionable.

Who would play you in a movie of your life?
Michael Chiklis.

What is your favourite book?
The CIA World Factbook

What is your guiltiest pleasure?
Bald Head Shine

What do you owe your parents?
My troublesome altruism and an overwhelming urge to meddle in things.

Which living person do you most despise?
I know people might expect me to say Galactus, but I have to go with Rupert Murdoch, for putting far too many channels of dross on television – how am I supposed to watch it all?

When and where were you happiest?
Narrating the What If..? series.

What single thing would improve the quality of your life?
TiVo for the universe.

What is the most important lesson life has taught you?
It is easier to get forgiveness than permission.