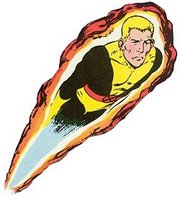 At puberty, in common with other mutants coming into their powers, Sam Guthrie developed the ability to fly, via the release of thermochemical energy, which also makes him invulnerable while flying. After becoming the co-leader of the New Mutants, he also joined X-Force, before becoming an X-Man, then joining X-Corporation, before coming back to the X-Men, because you can never get enough X. He has been romantically linked to Lila Cheney, the rock star (with the ability to teleport over galactic distances), and owns his own farm.

What is your idea of perfect happiness?
Fighting the good fight.

What is your greatest fear?
Claustrophobia.

Which living person do you most admire and why?
Professor Xavier, for his dream and what he has done for me.

What is the trait you most deplore in yourself?
Stupidity.

What is the trait you most deplore in others?
Thinking ah’m stupid ‘cos of mah accent.

What has been your most embarrassing moment?
Well, there was this one time that involved Lila getting me into a public nudity situation …

What vehicles do you own?
Mah mutant power is mah vehicle.

Where would you like to live?
Back home in Kentucky. Beautiful country and wonderful people.

What do you most dislike about your appearance?
Ah’m too gangly; ah hoped ah’d have filled out by now.

Who would play you in a movie of your life?
This may be vain, but ah think Paul Walker would be a good choice.

What is your most unappealing habit?
Blushing.

What is your favourite smell?
Fresh air.

What is your favourite book?
Gosh, what can ah pick? Anything by Heinlein, ah guess.

What is your guiltiest pleasure?
Air miles.

Which living person do you most despise and why?
Cable; let’s not go there …

Have you ever said ‘I love you’ without meaning it?
No, it’s not a gentlemanly thing to do.

What has been your biggest disappointment?
Finding out that ah may or may not be an immortal Eternal.

When did you last cry, and why?
Ah’m not ashamed to admit to crying recently, but ah can’t remember why.

What do you consider your greatest achievement?
Becoming an X-Man.

What is the most important lesson life has taught you?
Empty vessels make the most noise.

No Time For Blog, Doctor Jones

Whose Side Am I On? I’m On The Outside, Looking In …