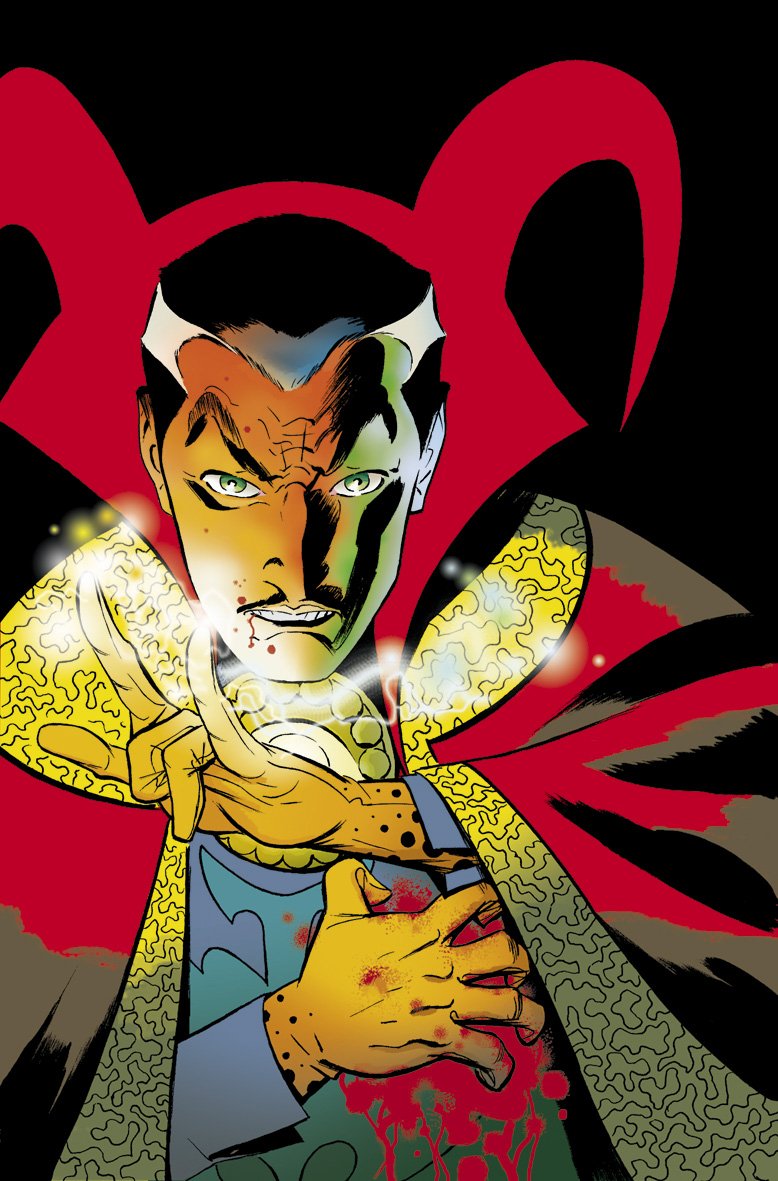 ‘Yes, I’m Iron Fist. No, I don’t know where Power Man is. We’re partners, not a couple.’ Nice dialogue to distract you before the strong start to the series: Strange has been shot. Which is why Wong has brought him to Night Nurse, medic to the heroes. Strange talks to her via his astral projection (which doesn’t have his cloak of levitation – Neilalien must be happy?). He was shot with a silver bullet from Hitler’s handgun – I love comics – by Brigand, who is working for someone, to steal an elixir.

There is a nice two-page summary of Strange’s origin, to tell the new people reading. The art of Martin is a bit like a cross between Brett Blevins and Darwyn Cooke, in a good way, but it is still an unusual style, even if there is a Ditko influence in there somewhere.

(Wonder what Scott at Polite Dissent makes of the surgery?)

We discover that Wong has a brain tumour and has 3 months to live. Strange obviously wants to do something about it so goes to shop in Chinatown to open a portal to Dimension Pi. Strange incants the opening spell while Wong kicks the asses of thugs who want to start something. Strange enters dimension to find the potion with the power to ‘erase what troubles the mind of men’ – turns out to be the cure for cancer.

Issue 2 sees Strange recover from surgery: ‘I believe I’m still covered through the Defenders’ old group insurance plan.’ He recalls the details of being shot by Brigand, who invaded the Sanctum Sanctorum and evades his magic. He has to retrieve the elixir, but Night Nurse will only allow it if she accompanies him, as he is still in critical condition.

Strange sent sample of elixir to Jonas Hilt, a man he boarded with at Med School – a flashback to his arrogant days, where Hilt stayed with him and then got Dr Nicodemus West (who has one blue eye and one brown eye) to fix his hands after the accident. They arrive at the lab, which Strange hid behind a mystic fog, to find the sample gone and Hilt murdered. Strange uses the Eye of Agamotto to reveal evidence suggesting that Mordo is behind it. They track the trace to a hidden fold in reality above the Harlem River. They enter and Night Nurse picks the lock of the door, which is protected by mystic sigil, only for them to be met by robotic guards (Strange: ‘By the Hoary #%*-ing Hosts!’), which they dispatch, only for Brigand to arrive with a gun to Night Nurse’s head (Vaughan does love his cliffhanger endings …) 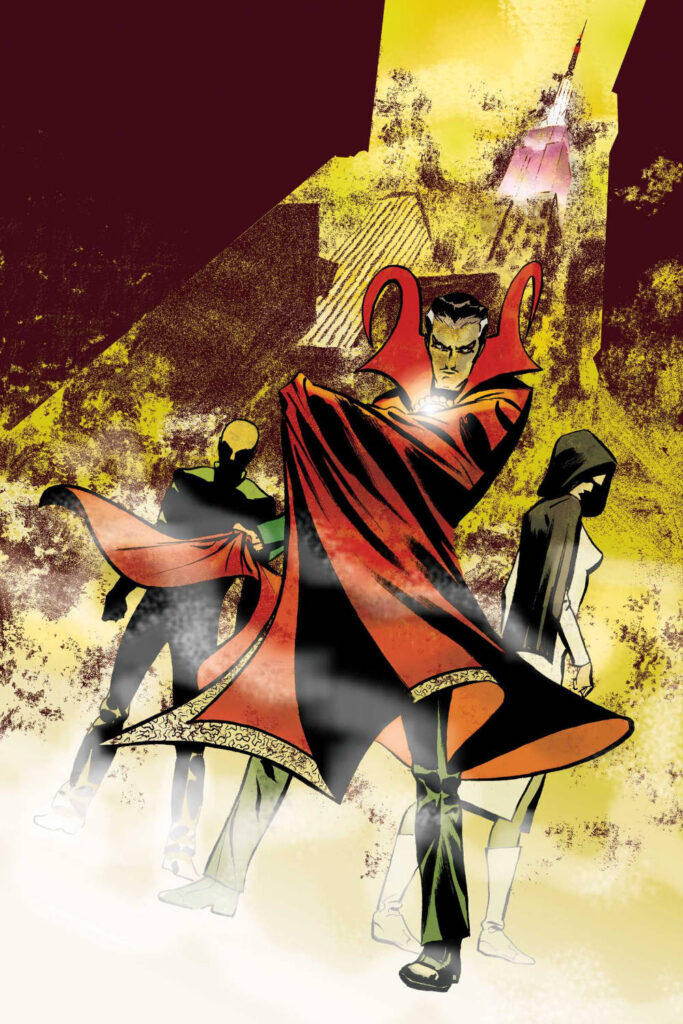 Issue 3 begins again with a nice recap front page, this time part of the Book of Vishanti, and then we see the misdirection of Reginald Pavlish, a patient who Strange refused to treat in his arrogant days, vowing to Nicodemus West that he was going to make Strange suffer. Back at the cliffhanger, Night Nurse headbutts Brigand, who is then disarmed by Wong. Strange holds him by magic and goes into his brain using magic (while Wong explains why Strange can’t use magic on a brain tumour, to stop people nitpicking the plot). In Brigand’s mind, Strange is not fooled by his false memories, so Brigand is forced to reveal his employer: ‘Who the hell is that?’ It is Nicodemus West, CEO of Timely Pharmaceuticals, who is talking to the Board of Directors about the elixir, and the pros and cons of curing everyone versus making lots of money (which makes the Board nervous about everything and naturally want everyone killed – even threatening West).

Strange traps Brigand in his own mind for all eternity, because he’s one bad mutha and the guy shot him, so fuck him. They go back to Night Nurse’s place to recuperate, only to find it is on fire due to magic done by West.

Issue 4 starts with Strange fighting the fire-starting demon Marrakant Hellguard, which has killed every sorcerer supreme who’s confronted it, so he will have to ‘Defy expectations’. He is a cool mofo, it has to be said. Wong and Night Nurse get caught by the many-tentacled demon (Strange: ‘This is why I never joined the Avengers.’ Oops. Obviously not seeing into future.), so Strange shoots it with Hitler’s handgun.

They go straight to West, who imprisons them with the Emerald Bands of Exador, because West was trained by the Ancient One – Strange refuses to believe this retcon but West has a good reply. West tried to cure Pavlish with magic but inadvertently killed him. The Timely executives came and cleaned up the problem so they could have him under control and keep his magic under their jurisdiction instead of curing people. Strange easily breaks out of the bands, he was just faking, and subdues West, who tells him the elixir is the Panacea. However, it takes that moment to begin dying from his tumour …

West escapes from Strange while he attends Wong. Strange follows him, with a nice pop culture reference to a Disney film, just to let you know that Vaughan is still writing, only for West to invoke the Sands of Nishanti: neither can use magic for the next three minutes. It looks like West is going to smack Strange down, only for him to reveal that Wong has trained him to be a kung fu king as well. In the words of Chris Sims, awesome. West is beaten but slips off the edge of the building they were on, taking the elixir with him. There is only a drop left, and his astral projection taunts Strange on its use: Wong or humanity. Strange decides on Wong. Fortunately, Night Nurse took some incriminating memo from West’s labs so that the Timely board of directors gets taken down (because everybody hates pharma). Strange offers Night Nurse the use of the Sanctum Sanctorum for her clinic, which leads to the final page kiss – comics are so romantic.

This is good comics. Vaughan has good handle on Strange and gives him an all-round story: mystery, magic, adventure, romance, fighting. Martin does a good job on art, so we have the full package. I’m not sure if we’re at the stage where Strange can handle an ongoing series, but I wouldn’t mind more mini-series if they were all of this quality.

From A Library: Origin