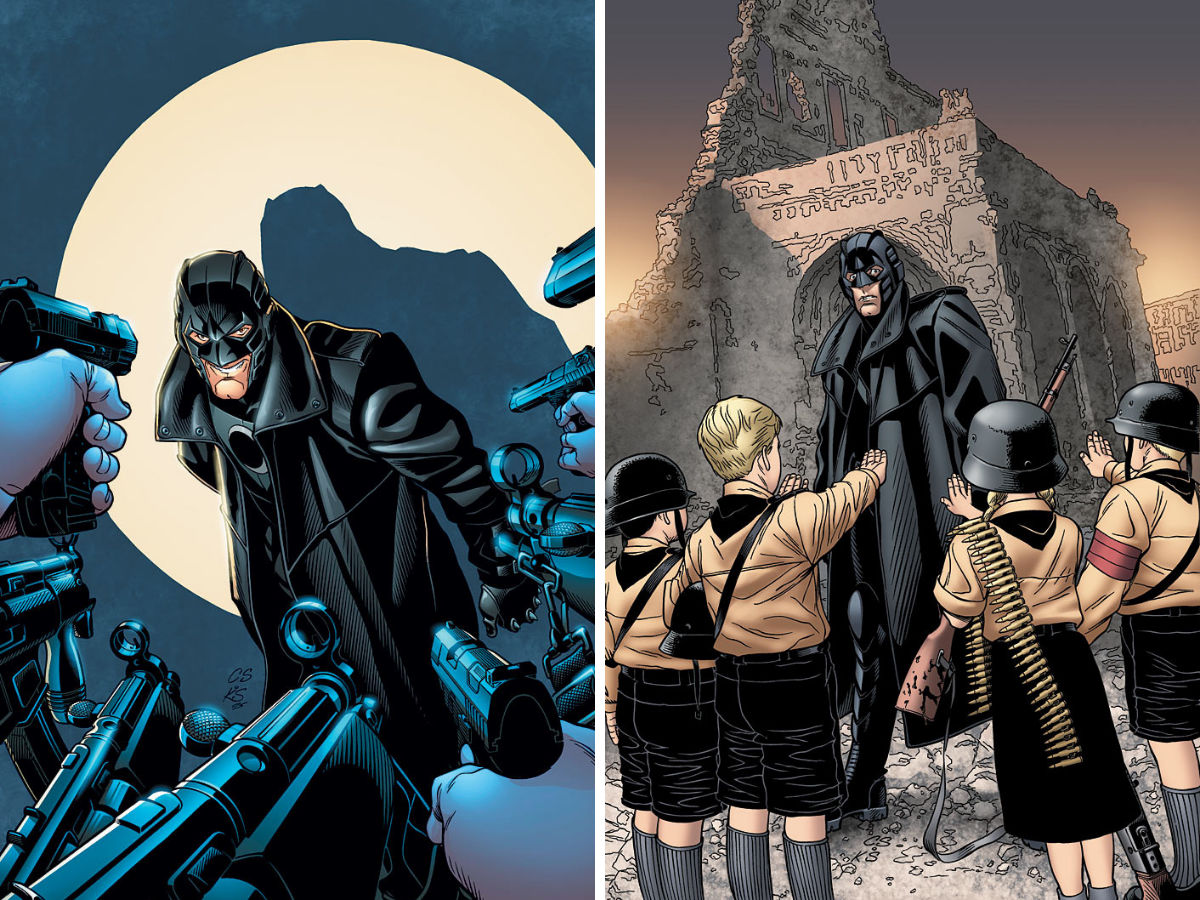 Midnighter doesn’t strike me as the type of character who requires his own series. He is a Batman analogue, taken to the extreme, who works well by brooding and being deliriously violent at appropriate junctures. Probably the only way I would consider picking up a Midnighter comic series was if it had an excellent creative team on board – Garth Ennis and Chris Sprouse is exactly that sort of combination. However, this shows that not everyone is perfect.

Ennis has a good understanding of Midnighter – a bit like Judge Dredd but with superpowers; Midnighter has to do what he has to do, with little time for anything else. And when Midnighter kicks a tank shell in a full-page spread, you can’t help but smile, and laugh when he kicks someone’s head clean off – it’s that sort of book. Unfortunately, after this intro, Ennis ruins it all by making his story about a rich man wanting to use Midnighter to go back in time to kill Hitler – he tries to make it a credible threat to Midnighter, but it’s all rather silly justifying an odd story. Our villain can conveniently remove Midnighter’s ability to predict what will happen, but it comes back when he time travels. Lack of story logic for the sake of plot – it’s a little beneath Garth.

So Midnighter is in the trenches of the First World War, finding Hitler as a corporal in the army. This allows Ennis to show off his military history, and Sprouse demonstrates his artistic excellence by being able to draw anything with seeming ease – and we get the joy of Midnighter kneeing Hitler in the ‘nads: ‘God, my balls–!’ until the Time Police turn up to stop him (although Sprouse isn’t around for the whole of issue 3 – Joe Phillips isn’t up to the task in comparison) and we end up by plot contrivances in Berlin in 1945.

The fourth issue, under a fun cover, requires the pencils of Peter Snejbjerg – talented and expressive but not razzle-dazzle – for the black comedy of the Hitler Youth kids and Midnighter’s funny reaction to them. He can also handle the violence – Midnighter punching a man through the face is spot on (‘I can only walk past so many Nazis.’) Midnighter finds Hitler, but he is a sad old man and Midnighter walks away (but not until Ennis shows off more military history knowledge).

The final issue of the storyline sees the return of Sprouse on art duty for Midnighter to do his thing – killing everyone in sight in wonderfully violent ways (after finding out that everyone in the future is non-gender specific in sexual relationships), kicking the villain’s head off in spectacular fashion. Then, he has the bomb removed from his chest and his second heart put back in WHILE STILL AWAKE. Hardcore. A bit of silliness from Ennis, with some nice hyperviolence, but nothing worthy of the talents involved.

I got the sixth issue, ‘Flowers For the Sun’, for the art of Glenn Fabry, only for the art not to be his top work. When I first saw his art in 2000AD, with the finely detailed art on Slaine, his line was clean, his violence dynamic, his characters expressive. I don’t know if doing mostly painted covers has dulled his talents, or if the production of a monthly comic book doesn’t allow for the full expression of his linework, but it doesn’t dazzle like it used to. Sure, there is some lovely ultraviolence, in the form of this samurai tale, cutting heads off, but it doesn’t feel the same. The story itself is very bizarre, as we see what seems like representations of Midnighter and Apollo in feudal Japan, supposedly a tragic tale of love in another time, but it feels a bit silly. It certainly doesn’t inspire sufficient confidence to keep buying and reading further Midnighter comics, even if Brian K Vaughan and Darick Robertson are next up for a one-off. Ah well, not everything can be perfect. There is some fun to be had but not enough to excuse the flimsiness of the exercise.

From A Library: House of M

From A Library: Forever Evil