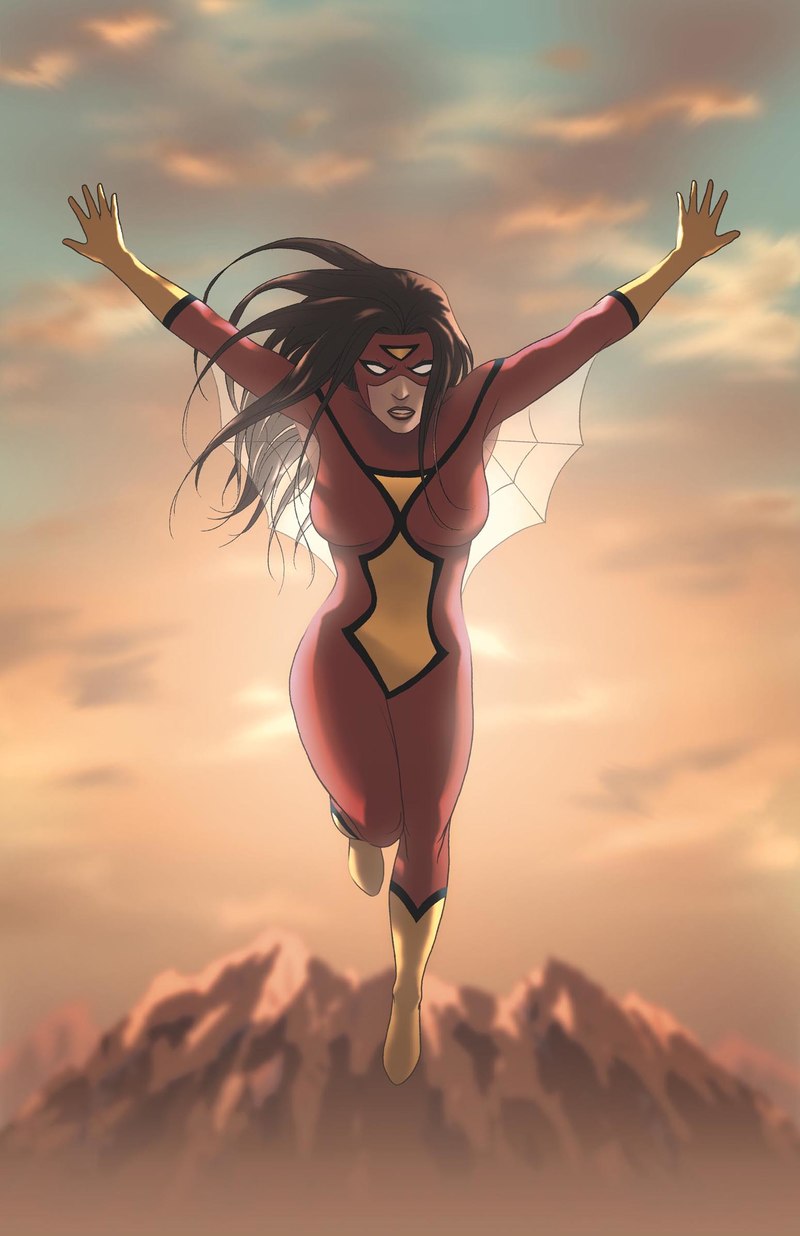 Everything you wanted to know about Bendis’ obsession, in one handy tome. Jessica Drew’s father is a scientist in Wundagore Mountain, and her mum is pregnant with her when she is hit by the DNA compiler ray – D’oh! Jessica is born and everything is fine until she gets to 6 years of age and there is oddness. Dad tests her DNA and finds it matches with spider. Her parents fight, causing Jessica to stop it by accidentally releasing one of her spider blasts. Next thing she knows, it is 11 years later in a Hydra base with her Dad’s old boss. We’ve all had nights like that …

Jessica is trained (by the Taskmaster) and indoctrinated into the Hydra way of thinking, before being sent to rescue her boyfriend, who she has been told is held prisoner by Nick Fury and SHIELD. She gets in but is captured by SHIELD. Fury shows her what her boyfriend was actually doing, and that Hydra has had her in an isolation tank for all that time to find out what she was, not the coma story they told her. She escapes and stays off the espionage radar for over two years, before she is found by Hydra again. However, she kills them and flies their plane into the Hydra base, including her Dad’s old boss (obviously she gets out beforehand).

Our nascent Spider-Woman stays off the radar for another two years (gosh, that was easy) before Fury finds her and he tells her that her parents aren’t dead. He takes her back into SHIELD, and to where her mother is, only to find out she is dead. She then goes undercover on her own (these SHIELD agents are rubbish at keeping track of people) and finds the head of the new Hydra project, killing him in the process, and then invades the base of the new project. It is here she finds her Dad.

Her Dad talks about how much of a Hydra man he is; Jessica goes to attack him but is mentally blocked by a Hydra back-up hypnosis to stop her if necessary. She then blows up the base (so the hypnosis isn’t that effective then, is it?) after fighting a gaggle of experimental attempts at Spider-women, and her Dad is shot by Madame Viper (although Dad’s old boss survived the plane blowing him up, so there are some soon-to-be background villains for the future for Jessica). Jessica is rescued by Fury, who offers her a job, but she refuses, before going to San Francisco to become an investigator (and to re-join normal continuity).

This is rather feeble stuff. There is some nice spy bits from Bendis (he loves the espionage thing, doesn’t he?) but there’s not enough to justify a series. I’m guessing here, but it feels like Bendis plotted this and Reed wrote it up because it doesn’t feel like a Bendis book. The whole thing is made worse by the artwork. The line work is like the sort of stuff I could have drawn. Admittedly, there is a nice sense of design (the use of blurring the backgrounds to focus on the foreground of the panel) and the ability to draw backgrounds and tell the story clearly is not at fault, but the pencils of people, and particularly their faces, is rather horrible. And this was in hardback – a bit of a waste of the format.

From A Library: Pride Of Baghdad

From A Library – Resident Alien: Welcome To Earth!