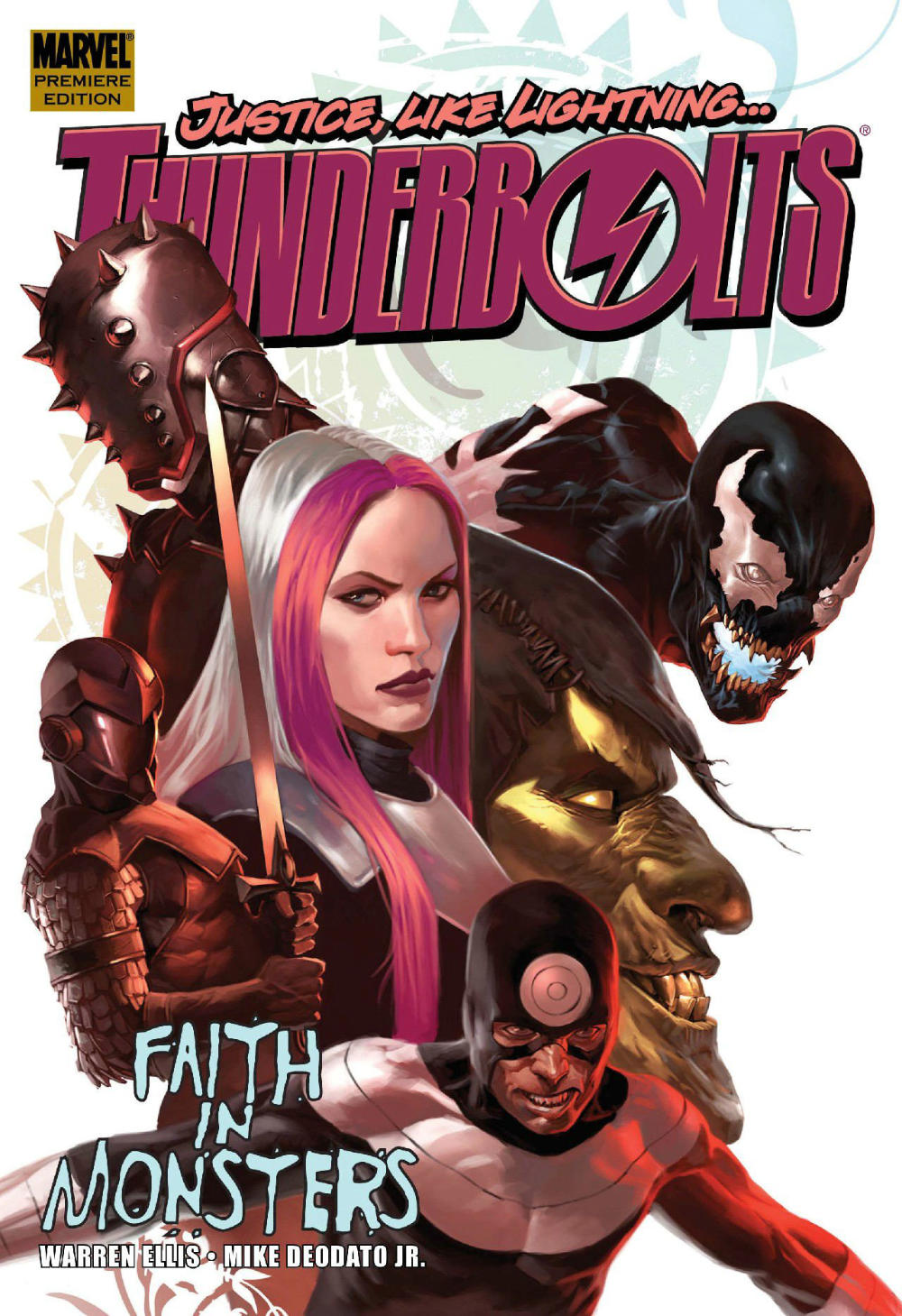 Warren Ellis’ work-for-hire books for Marvel falls into the category ‘wait for the trade’; when he is brought onto an ailing title for the purposes of boosting sales in the wake of a crossover, this is a confirmed decision. Thunderbolts was always in the lower tier of Marvel’s titles – the book started off with a bang, with the great reveal of who the Thunderbolts were – but the idea of bad guys pretending to be good guys apparently didn’t seem enough.

As part of Civil War, the Thunderbolts are still bad guys pretending to be good guys, but this time they are sanctioned by the CSA and their job is to hunt down unregistered superpowered individuals. They are Songbird, the Swordsman, Penance, Moonstone, Radioactive Man, Venom and Bullseye, under the control of Norman Osborn (drawn as Tommy Lee Jones with the silly Osborn hairstyle), who is brilliant but mentally unstable. The story intersperses the initial interviews between Osborn and the new members of the team, with the heroes who will be hunted by the Thunderbolts. In this way, Ellis is able to introduce us to the team and humanise the the D-list characters who might otherwise be a joke. Jack Flag, who once fought alongside Captain America (something that Ellis treats without disdain, even including a flashback scene), is unregistered and his girlfriend doesn’t want him to get into any trouble. When the Thunderbolts come to take him, you care for the character as he fights for his life, and cheer for him as he fights back.

Ellis has a lot of fun with the idea, having the Thunderbolts being feted as heroes by the media (with a camera crew on full alert at their base, Thunderbolt Mountain) and their action figures being sold in the commercials (with a screaming Captain America for them to capture). There are snapshots of television shows of various idiot commentators barking their opinions on the matters in hand (‘[Tony Stark] could be watching us through the cameras in the studio right now’). He also has a lot of fun in the dialogue, such as between Osborn and Radioactive Man (‘Educate them? See, that’s foreigners’ talk. Joke.) Best joke is probably the Who Wants To Be A Thunderbolt? with Stan Lee advert, talking about previous winners such as Stabbity Jones. However, against the belief that people have of Ellis that he hates superheroes, he treats the scenario seriously as well as the characters, making them real and giving them believable characteristics. We spend four pages with the Steel Spider as he returns from a night patrol, taking off his gear and feeling pain. He even treats Penance, possibly one of the stupidest ideas at Marvel at present, with equal seriousness as the rest of the story.

Deodata works well on this book, toning down his cheesecake elements (except Moonstone’s enormous breasts on his cover for the second printing of issue 110, which is his reworking of the Combined Young Guns Variant cover for issue 111, which combined the Young Guns individual variant covers into a gestalt cover – wow, this seems even more complicated when I explain it) and telling the story well. His art has evolved since he and Ellis first worked together on their four issues of The Mighty Thor all those years ago, and he draws dynamic action as well as the facial expressions and camera angles of the talky scenes. There is even thought behind the work – in a shot of the Thunderbolts walking towards Jack Flag, he has Moonstone wiggling her hips more than Songbird, because Moonstone would be using her femininity on Flag in the fight.

As usual with Ellis, even though it is work-for-hire, he does a professional job and tells a good story with skill and efficiency. I came into the book not expecting much, but I was rewarded with a well-told tale, good ideas, action and humour. The rest of the book is filled out with some small tales that are notable more for their art (Steve Lieber, Francis Leinil Yu, Marc Silvestri) than the stories themselves. I didn’t think I’d say it, but I’m looking forward to more Thunderbolts (at least, from Ellis).