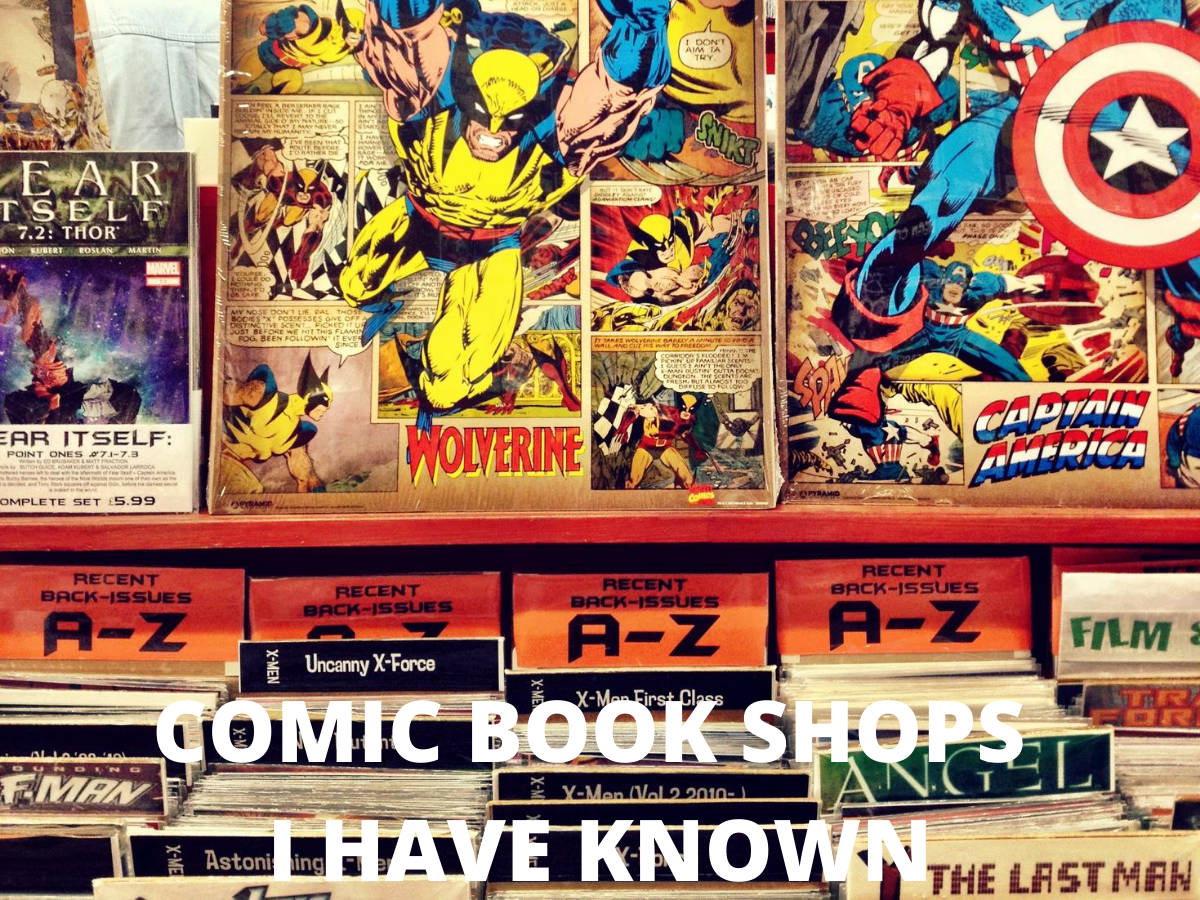 I’ve talked about comic book shops – both in London and elsewhere – that I shop at, have shopped at or are around for me to access in London. For a final post on the topic, I wanted to get out of my system the other comic shops I have known but are either no longer around, or I don’t necessarily classify as ‘comic book shops’ or, worse, I can barely remember but sure they existed.

The first in this list is Top 10 Comics, a shop co-owned by long-time comic book fans and media people Jonathan Ross (famous telly personality, of the BBC documentary about Steve Ditko and snogging Neil Gaiman at the 2007 Comic Con) and Paul Gambacinni (radio DJ and titular inspiration for Paul Gambi, the tailor to the super-villains in The Flash). It was a small unit in St Anne’s Court in Soho, a small alley between two roads; the size didn’t matter because apparently Ross was the major purchaser of comic books in the shop. I shopped there for a little while, especially when they gave a 10% discount if you had a subscription list with them. Unfortunately, it didn’t last; I turned up one Saturday to discover they had closed down. Turns out Ross isn’t as successful as a comic book shop owner as he is a television celebrity (with the exception of the recent Manuelgate episode).

Another shop I visited a couple of times, although I didn’t have a subs list, was Krypton Comics, in the Seven Sisters area of North London (also known as Seven Murders). I can’t remember too much about the shop, apart from it being a nice space with lots of back issues. Its claim to fame (in the geek world) was being the comic book shop Silent Reading in the episode of Spaced where Tim briefly worked (deliberately getting himself sacked with the line, ‘Babylon 5’s a big pile of shit’). However, it seems that Krypton Comics is now only online – this must have happened recently because they are still listed in online directories of comic book shops in London at the same place; however, I know they’re not there because I dragged my long-suffering but wonderful girlfriend up and down Tottenham High Road, and it’s not there.

A place I used to like visiting, and occasionally exchange old comics for money or trades, was the Book & Comic Exchange in Notting Hill. I haven’t been there in a while but I used to love rifling through the back issues they had there, at extremely reasonable prices, and trying new things by swapping old comics for whatever they were worth. I didn’t do that a lot – it took a long time for me to get rid of my comics, love them as I do – but it seemed a sensible thing to try at least. I don’t know if they still do comic books, because they tend to be listed as books/DVDs/CDs exchange, but I hope they still do business.

Now we get onto memory that even Google can’t help fill in the gaps. There was an actual comic book shop in Notting Hill, down on Portobello Road (which made it a bitch to get to on market days). I think it was called Fantastic Store – I remember it even had the same font for the shop sign as the Fantastic Four comic book logo [now confirmed as Fantastic Store – see the scan of old comic shop flyers in this London Loves Comics post] – and had a nice mix of new and old comics. I recall getting my fingers dirty going through their longboxes, and they were one of the first places I remember having cheap bins – I picked up a reprint of Lone Wolf and Cub (with a Frank Miller cover) for 50 pence so that I could see what all the fuss was about. The shop doesn’t exist any more, and I don’t know what happened or when, but I’m glad it did if just for the best title of a comic book shop ever.

The weakest memory, such that I sometimes think I’m imagining it, is of Meanwhile – this was a fancy place in Camden, just opposite the tube station, which was going for upscale end of the graphic novel market. It was more like a book shop for the trendy set, as I recall, but my memories are vague from only one visit and I seemed very out of place in there (I was a poor student at the time) and knew I wouldn’t be back. I don’t think it lasted the year, which doesn’t surprise me – even London wasn’t ready for a posh comic book shop.

There might have been a comic book shop in Leytonstone – I recall being on the Central line nearly to the end of the line – but that’s so clouded in the shrouds of mystery that I can’t even recall a name for the shop. [EDIT: another confirmation from the London Loves Comics post with old comic shop flyers – the shop was called The Comics Shack, and it was in Leytonstone.] And that’s about it; I don’t think there’s any more memories to inflict upon you, and I won’t be visiting comic book shops around the country just for content for this blog, so that’s your lot. Go and enjoy your own comic book shops.