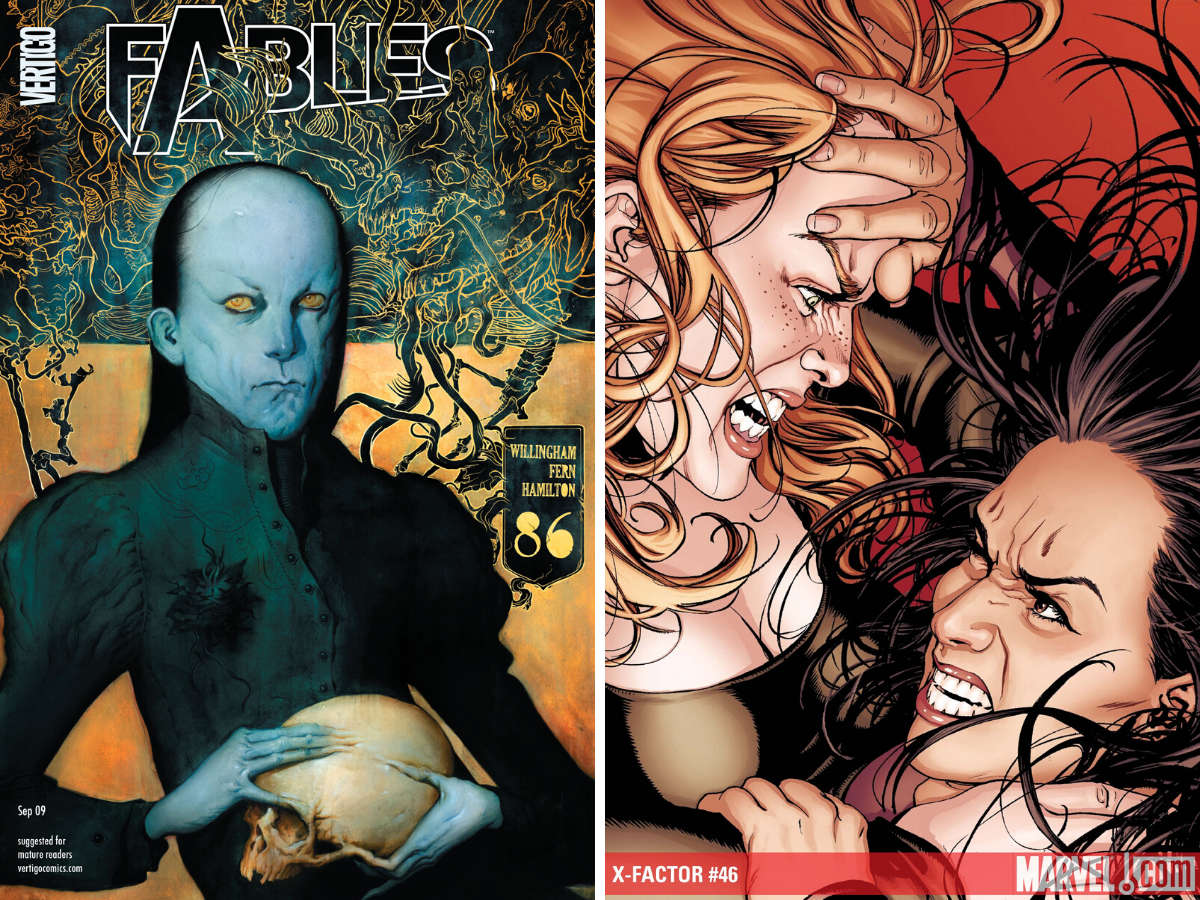 The road to daily blogging is plagued with good intentions. I don’t know why I even try any more, but the trying is good, isn’t it? Why don’t we agree to my writing something when it arrives and for you not to expect anything else, like regularity, good writing, novelty or a reason to return. Oh, woe is me and my poor life, etc. Just ignore me and let’s get to the comic books, where I decided not to buy Wednesday Comics #2 – it is an interesting experiment that I hope does well, but it didn’t do enough for me to persuade me to come back for more. I guess I’m the responsible for the death of comics, eh? In related news, I’m also not buying Blackest Night, but I doubt DC will be losing sleep over me not buying their mega-crossover about zombies killing their superheroes.

Fables #86
When I was buying my haul, even the chap behind the counter said ‘Return to form’. I guess I’m not the only one (including Clandestine Chum Greg Burgas) who has thought that The Great Fables Crossover was more like ‘The Great Fables Interruption To Normal Storylines Just To Make You Buy Jack Of Fables’. Bill Willingham is back to solo writing duties, which means we get back to the Dark Man, as we learn how he was originally captured (by the Boxing League, the notorious combat magicians of the Emperor). The Dark Man doesn’t play much of a part in the story – it follows the rise of Dunster Happ from country warlock to top combat leader of the entire brotherhood – suggesting that we might see more of Happ in future issues, but we do get the sense of his power (‘nothing less than every dark thing in the dread of night’), especially due to the art of Jim Fern on the fights and double spreads. Giving Buckingham a rest after the crossover, he does a good job (although he takes a few pages to settle in and adjust), ensuring a consistency to the world created by Buckingham. Welcome back, Fables – nice to have you back.

Incognito #5
I don’t know when Incognito got bumped to six issues (it was initially announced as five), but I’ve got no problem with having extra issues; this is just really good comic books from Brubaker and Phillips, and I’m enjoying the hell out of it. Zack has escaped with Ava Destruction, and we learn more about her relationship with his twin brother (and how that affected Zack) and, more importantly, Ava ‘educates’ Zack on the real history of their world and how far it goes back and what it means specifically to Zack (and to Ava). Brubaker seems to be having a blast with this Doc Savage world he’s created (Criminal is brilliant, but I always get the feeling that the grim and relenting misery that follows the characters in that book must take a lot out of him, and here he can just cut loose and relax), and Philips seems to have loosened up, providing more light and energy than the darkness of Criminal, with some lovely transitions and small panels breaking up the flow. I hope that there is a good resolution coming up in the last issue but that also leaves open the possibility of more Incognito.

X-Factor #46
I really like the cover by David Yardin – it really captures the emotion of a girl fight without resorting to cliches; the close-up feels so raw. Although the cover gets the name of the penciller wrong – it says De Landro but the interiors are by Marco Santucci. It’s nice to have one artist doing the whole book for once, even if it is a little uneven and inconsistent. But that could be because of Santucci keeping up with Peter David’s plot, as he makes it even more complex than following two timelines and a large cast of characters and adding what I assume is supposed to be a twist character introduction (I have no idea who Fitzroy is, so the impact is completely lost on me). Peter David has done a great job just by keeping X-Factor as an ongoing comic book in the current climate (how many other series, including other mutant-related titles, have made it to 50 issues in the past decade?) but he seems to be taking a strange detour with this current storyline. However, X-Factor continues to be one of the most enjoyable and interesting mainstream superhero books at the moment, not afraid to do something different and keep things unbalanced, so the reader never knows what to expect.

From A Library: Fallen Angel Omnibus

From A Library – Catwoman: The Replacements