I’m a fan of the Harry Potter books and film (see these links for proof, so apologies for the slipshod nature of these notes), so the sixth film in the franchise is going to be aimed for me, despite any noble intentions the film-makers might have about making the film accessible for everyone. I also think that this film has more resonance for people who are intimately familiar with the books and films, getting more out of the small moments that make up this film, instead of the normal plot-heavy stories that have preceded this latest instalment.

One of the pleasures of this series is the adult actors, who have been brilliant casting and give good performances in small roles. Alan Rickman is brilliant as usual as Snape, except for the flat and awkward delivery of ‘I’m the Half-Blood Prince’ line at the end of the film. Michael Gambon is finally good as Dumbledore, getting the whimsy and the tough and the smart; it’s a tough role that I don’t think he had got quite right in the previous three films. Jim Broadbent is good fun as Professor Slughorn (I was hoping for a reunion between the Spanish Infanta [Miriam Margolyes, also Professor Sprout] and her interpreter (Don Speekenglish) from The Blackadder episode, The Queen of Spain’s Beard – I’m just amused at Oscar-winner Broadbent doing a silly Spanish accent, ‘Yes, my love, my love’; however, Sprout doesn’t make an appearance, so my dream went unfulfilled), coming in as a new chap in the ensemble but fitting in smoothly.

The film is streamlined from the book – the Slughorn memory is changed to having no mention of the Horcrux, which gives a purpose to getting the memory and a revelation for when this is achieved, giving dramatic impetus for film rather than just confirming Dumbledore’s theory as in the book; Malfoy’s plot is shown throughout the film, setting up a ticking clock, rather than having it as a vague plot happening in the background in the book; this also means that the film eliminates Dobby and Kreacher, and there is only a little bit of quidditch. But they’ve got a lot to cram in, especially as they are more interested in the emotional connections of the various characters.

The younger actors have to do a lot more acting than normal, and it’s at this point that the producers must think how lucky they got with young cast growing up – Ginny and Draco in particular. Daniel Radcliffe is hilarious in the Felix Felicis ‘happy’ scenes but his serious stuff isn’t so good (the scene where he gets the memory from Slughorn should have been him being more magnetically charming; forcing Dumbledore to drink the potion should have been more emotional), but it’s similar with the younger stars (except Emma Watson, who is good at both); Rupert Grint is hilarious when he’s under the love potion, but mopey for all the rest. This has an effect on the interactions: in the film, Ron is the comic relief, which works well; unfortunately, it makes him look like a bit of a prick. His only redeeming feature is his loyalty to Harry, which makes Hermione’s affection for him completely unwarranted.

The film works if you know the characters; otherwise, it is ordinary teenagers and their emotions, with a bit of special FX, which must have been quite a hard sell. However, I really enjoyed it because I’m familiar with characters and story and enjoy seeing it move along, seeing the characters interact and play off each other. Anyway, the sixth book is a large info dump and a lot of set up for the final book, so turning it into an emotionally narrative motion picture was always going to be difficult.

I really enjoyed the little moments that were added to make the development of relationships more cinematic (instead of taking its time in the book), such as when Harry is dropped off at the Burrows and the interplay between him, Ginny, Hermione and Ron; Harry and Ron discussing ‘nice skin’; Hermione talking about the smells in the love potion; Harry and Ginny eating mince pies. Other changes to facilitate the film I’m not so sure about: the attack on The Burrows is not in book and doesn’t really serve any purpose as far as I can see, and loses some internal logic because of that. I’m also not sure about the famous talking point, where Harry Potter immobilised in book at the big scene, but here he doesn’t interfere with the action because Snape tells him not to; this changes the tone of this scene in the Tower, and I still haven’t decided which I prefer. 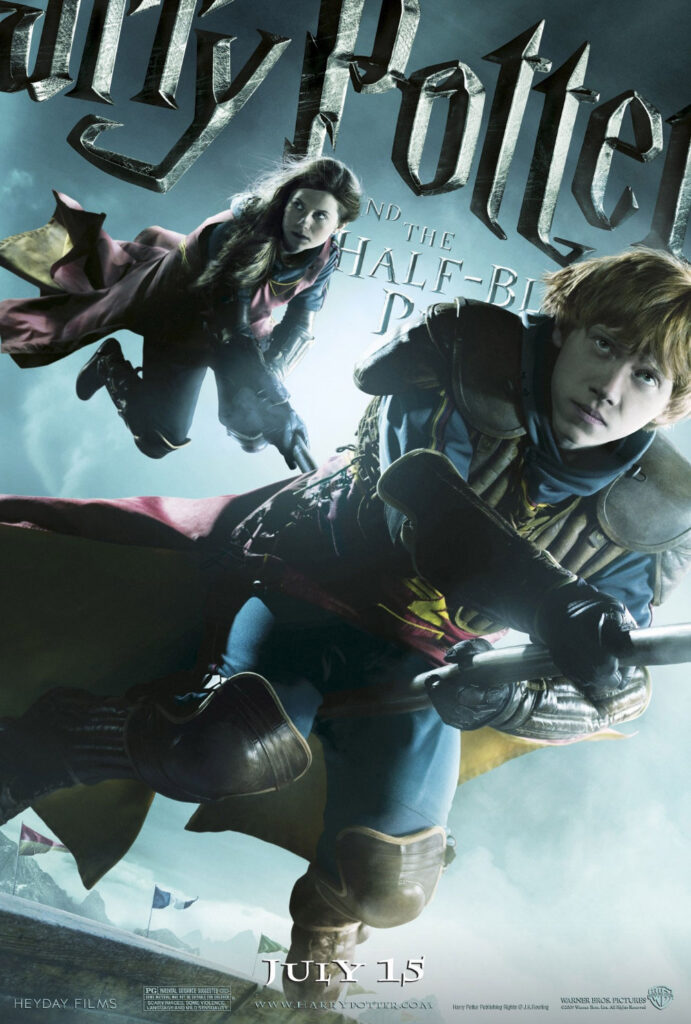 An aside: if Dumbledore doesn’t know about the Horcrux in the film, why did he go looking for the ring? (The story of the ring is not really explained in the film, so maybe they didn’t care.)

David Yates does fine in the director’s chair (the opening shot of Death Eaters flying over London is great) but he’s not as good with the young actors, especially if you compare their acting with the more natural and believable work in Prisoner of Azkaban under the direction of Alfonso Cuaron, and he still doesn’t provide the background magic (again, compare with Cuaron’s work); I understand that the films are getting darker and it’s not about the magic, but the element should always be there in non-distracting form. However, he keeps control of the film and brings it home.

Finally, a fan’s silly snipe: the only thing I would have liked that wasn’t in the film was Fawkes’ lament. They showed him flying away, but I would have liked an attempt at his song of mourning, although it happens in the book in a section that is excised completely from the film, so perhaps it would have been difficult anyway.

My final verdict is slightly biased (aren’t they all?): this is not a great film, especially for people coming new to the film (but how many people are there like that?), but it is very enjoyable for fans, and I’m one of those. It’s warm, moving, detailed, interesting and fun to watch the characters interacting.