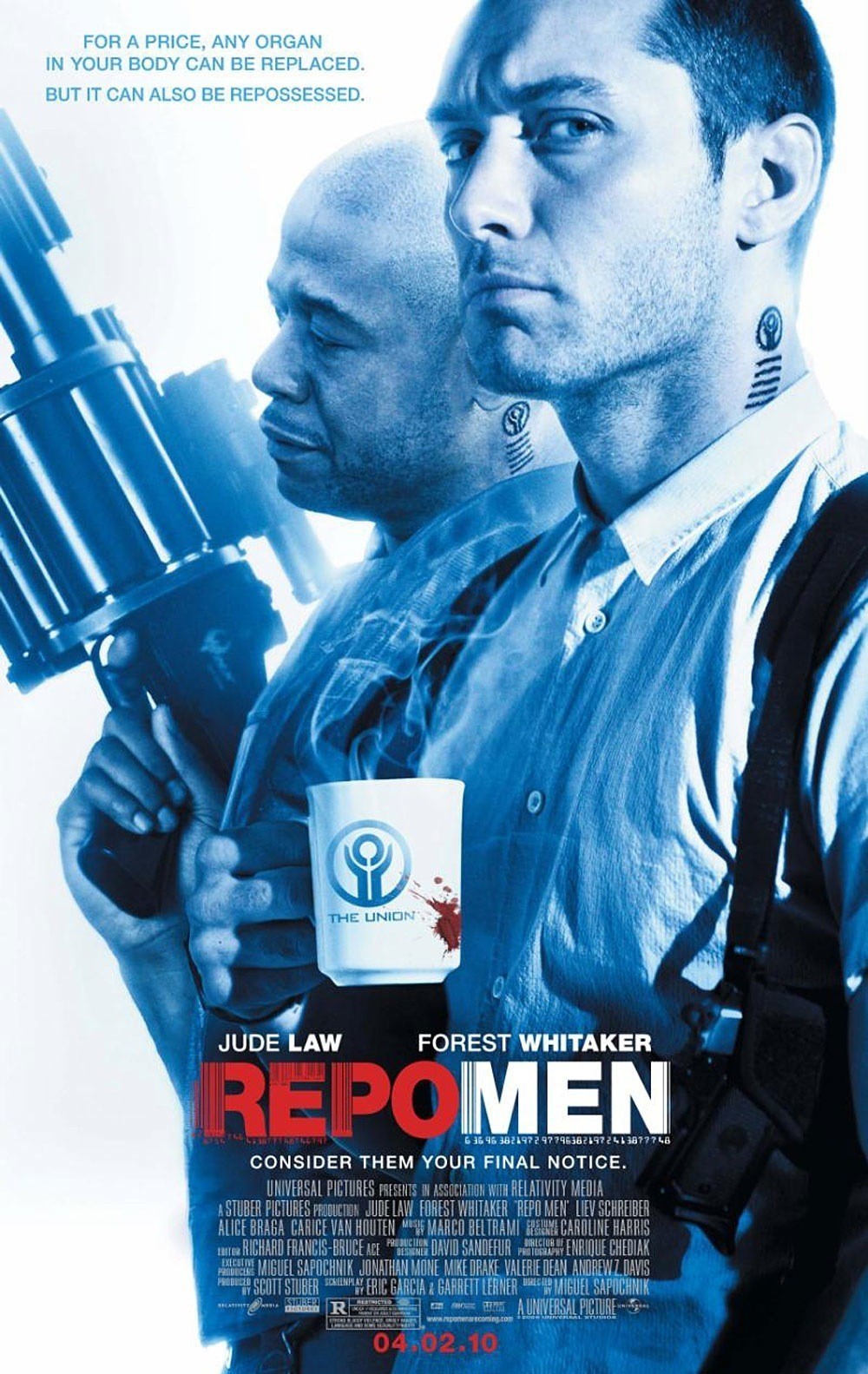 Repo Men is a simple, straight-up piece of genre B-movie; it knows what it is, it enjoys being what it is, and does it without embarrassment or pretension, and I enjoyed it for what it is. Because it is based on a novel by co-screenwriter Eric Garcia (The Repossession Mambo), it means that the story is worked out clearly, and the twists in the film are both clearly posted and set up earlier in the story (if you can’t work out what is happening then you either haven’t watched many movies or you weren’t paying attention), and it gets on with the job in an efficient manner.

It is some time in the near future. Remy (Jude Law) is a top repo man for The Union, a company that has perfected artificial organs and sells them to people at prices with huge interest rates that means most customers will never be able to repay. Remy works with his childhood friend Jake (Forest Whitaker), who enjoys the life, but Remy wants a more stable life in sales so he can satisfy his wife’s desire for him to have a less savoury job. On a job to harvest organs from a music producer he admires (RZA), Remy’s heart defibrillator goes haywire and knocks him into a coma and he ends up with an artificial heart. Being unable to make the repayments, because he finds he can no longer harvest people who are essentially like him, Remy leaves the city with a woman whose body is full of organs that are past due, only for other repo men to come after him, which make him decide to do something that will get him out of The Union’s system for ever.

The main attraction to this film is the visceral nature of the special effects – the blood flows freely and in large amounts, there is extreme violence (Law in a corridor attacking a bunch of executives with a hammer and a hacksaw, reminiscent of the scene in Old Boy; and a scene where Remy and his new girl are removing artificial organs from each other to clear their names is insane and intense) and it does it with abandon. It’s weird seeing such a ‘serious’ cast in something like this: Oscar-nominated Law, Oscar winner Whitaker, Carice van Houten (from Black Book) under-used as Law’s wife, Liev Schreiber as Law and Whitaker’s slimy boss; it gives the film a sheen of respectability that less well-known names could not have provided. However, the film is enjoyable, with some flashes of humour (seeing a young Chinese girl reacting with joyous glee pulling out an artificial knee is hilarious) and nicely choreographed fight scenes with a solid story (with a timely idea regarding greedy corporate medical corporations). It’s not changing the face of cinema or the greatest thing I’ve ever seen, but it was a very solid piece of entertainment.

Notes On A Film: A Serious Man