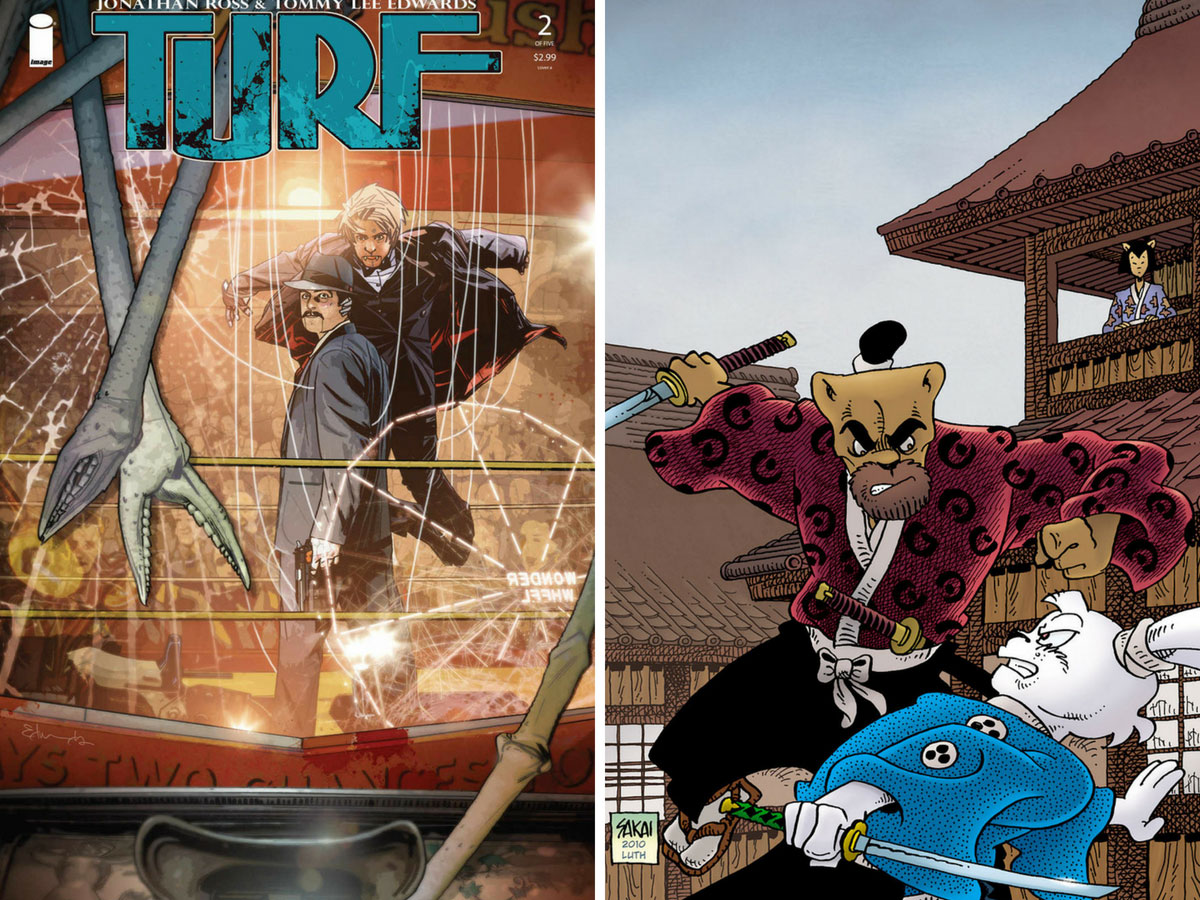 After yesterday’s self-indulgent whimsy, I’m back to doing the thing that I do: talking about stuff that everybody else talked about when it was topical, in a waffling and non-critical manner. You should know the drill by now.

Turf #2
The first issue came out in the beginning of April – looks like this series is going to take a long time finishing. Still, it’s enjoyable when we get it – watching Eddie Falco surviving an attack from a horde of vampires and then meeting an alien is quite an adventure. Jonathan Ross hasn’t overcome his tendency to include far too much dialogue in the talky scenes, but he does step out of the way and let Tommy Lee Edwards strut his stuff artistically when it comes to the action: flying vampires, gangsters with Tommy guns, little alien insectoid creatures; it all looks good. Ross is doing a good job of balancing all the aspects of the story, including the crooked cops, the cops trying to keep things working as they are, and the vampire family plotting. The only annoying aspect, apart from the delay between issues, is the character of reporter Susie Randall, who unfortunately seems to have an important part in the story. She’s supposed to be irritating (I hope) but that doesn’t make it any better. Anyway, I’m looking forward to the next issue, whenever it comes out.

Usagi Yojimbo #129
Stan Sakai returns to the story of his tribute to the Yojimbo film: Kato, the other samurai from the original story, believes that Usagi cheated him out of his money, so he’s looking for him, only for them to have an ‘Encounter At Blood Tree Pass’. Fortunately, Kato is an honourable samurai (which is lucky for Usagi, as his ‘Phew!’ suggests). This is as well told and well drawn as all Usagi Yojimbo books, but titled as a single issue tale, even though it is obviously part of a bigger adventure – the story ends with the two deciding to return to the town from the original story. In a world where the ordinary comic book is marketed to selling it in the trade paperback form, it’s a typically refreshing approach from dedicated master storyteller Sakai.

From A Library – Justice League of America: The Tornado’s Path

From A Library: Grandville Mon Amour