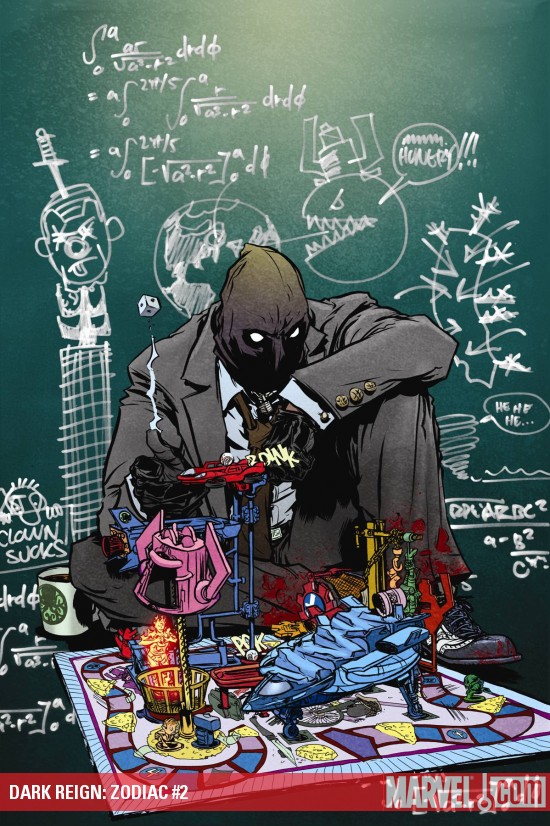 In the basement of the lovely comic shop Gosh!, you can still find lots of cheap collections of various comic books, and the three issues of Dark Reign: Zodiac were there for £2. Seeing as a $2.99 comic book costs £2.20 nowadays, a presumably entire story for less than the price of one seems like a good deal. Also, I thought I remembered hearing good things from various review sites, and it’s written by Casey, someone whose work I’ve enjoyed (such as Wildcats Version 3.0, mentioned yesterday). You now know the entirety of my logic for the purchase of these comics.

Having read the story, I’m still trying to work out exactly what the point of it is; I know that it might be because I’m not reading it within the context of the Dark Reign storyline that was going across the Marvel universe last year, but I can’t see the point using my powers of imagination to place it within its time frame. A violent supervillain calling himself Zodiac, after killing the previous incarnation of the criminal organisation of the same name, has collected a small group of villains (Clown, Death Reaper, Manslaughter Marsdale, Dave Cannon aka Whirlwind) and is waging a vendetta against Norman Osborn for being told to go legit while Osborn is in charge, mainly because this Zodiac enjoys being a supervillain.

The first issue sees him kill 100 H.A.M.M.E.R. agents, then take down The Human Torch; the second issue sees him blow up the hospital where Johnny Storm is being treated, and convinces H.A.M.M.E.R. that the world is under attack from Galactus while Zodiac lobs a giant robot in to New York; the final issue sees a lot more mayhem before Zodiac reveals that it was all to recover the Zodiac key (a powerful weapon) so that he can take on Osborn properly. And that’s it. Casey includes some funny dialogue (Zodiac tortures a H.A.M.M.E.R. agent, asking him what the acronym stands for), and it’s certainly not something I’ve read in a Marvel comic book (Zodiac does feel a bit similar to the Joker on occasion), but I still can’t work out why it exists as three-issue mini-series.

The other factor of note in the book is the art – Nathan Fox is not an artist I’ve seen before but he’s definitely something new for a Marvel book (it reminds me a little of Keith Giffen in his Munoz days); he’s a competent artist with a strong style of his own, full of detail and little extras that add spice to the panels (particularly sound effects). The characters are all individual and he moves the story along well. However, I found his faces rather ugly and his spandex looks crinkly and horrible, which I think is rather important in a comic book set in a superhero universe, but I know I’m old-fashioned like that. Still, he’s an impressively different artist without needing my approval. I think he may be the reason why this comic book exists; decide for yourself based on the cover for issue 2 at the top of this post.

A Month Of Comics: Part 3