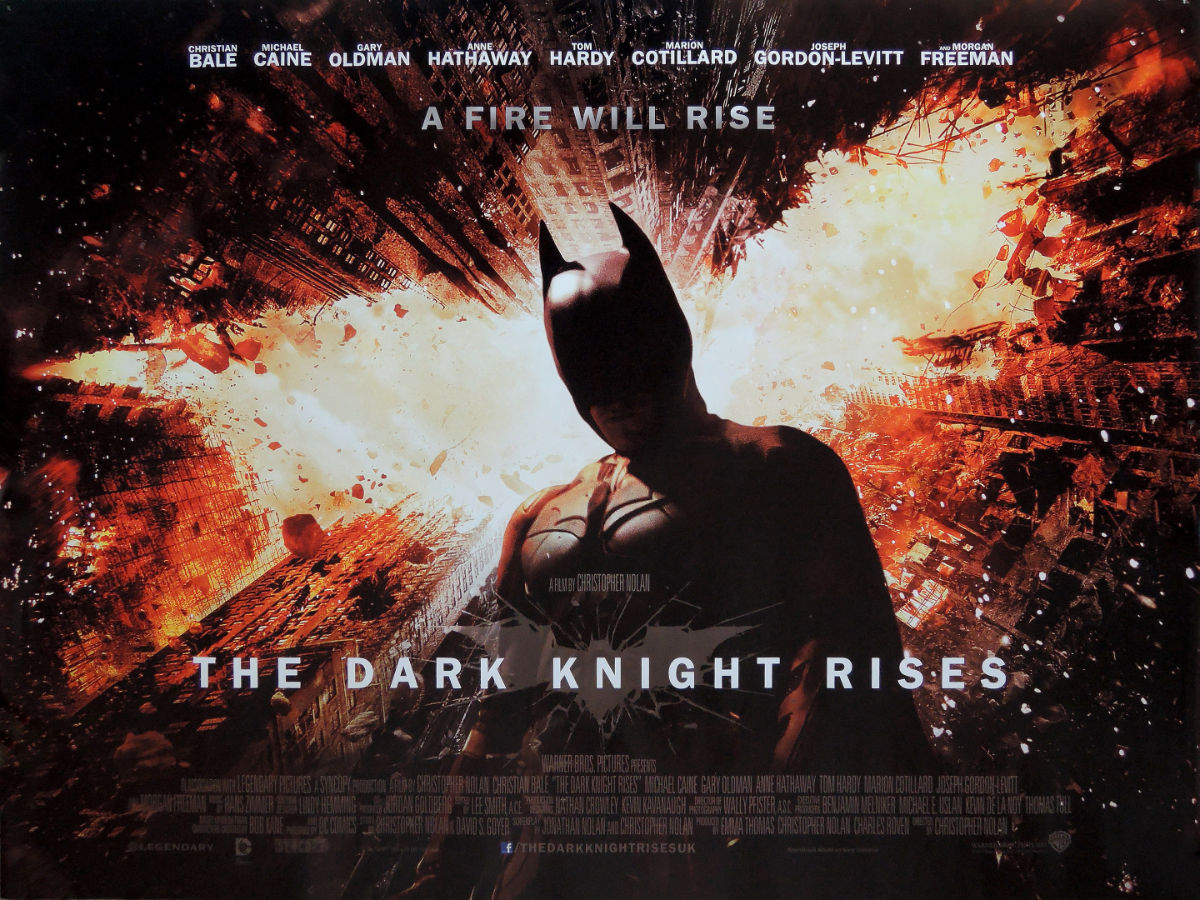 Several weeks after the film came out – this is absurdly late to post my thoughts on this film. All the discussion has already occurred, although I avoided it for fear of spoilers, and I have nothing new to add. However, The Dark Knight Rises was such a wonderfully enjoyable film, I had to compile a few notes to honour its achievements.

This has been a good year for superhero films: The Avengers and The Dark Knight Rises have been really good films that honour their comic book roots and have been enjoyable stories, albeit in different ways. The thing I love about The Dark Knight Rises is that it’s a complete story (although it does allow for the possibilities of future ideas), a great trilogy that connects everything with a sense of purpose and resonance that provides a wonderful sense of narrative satisfaction (I will avoid the word ‘closure’). The three films provide an entire chronicle of a character, told with intelligence and skill, and which leaves the inevitable reboot of Batman as a cinematic franchise as an almost insurmountable achievement because of what Christopher Nolan has done.

The Dark Knight Rises is the next chapter in the story: just as Batman Begins finished with Gordon showing Batman the Joker card which led to The Dark Knight starting with the Joker’s bank heist, the end of The Dark Knight (where Batman takes responsibility for Harvey Dent’s actions) leads straight into The Dark Knight Rises, even if it is eight years later. The Batman hasn’t been seen since; Bruce Wayne (an excellent Christian Bale) is a recluse; Gotham City is a better city due to the Dent Act allowing the imprisonment of 1000 criminals in Blackgate, although Jim Gordon (Gary Oldman) feels guilty about how this was achieved by tarnishing the name of the Batman and lionising Harvey Dent. The fragile balance cannot hold for ever …

This is a long film with a lot happening in it, with lots of different characters, several of whom are new to this film. We are introduced to cat burglar Selina Kyle (Anne Hathaway), the massively built but quietly and well-spoken Bane (Thomas Hardy in muscular form), Wayne Enterprise board member Miranda Tate (Marion Cotillard) and her clean energy project, and patrol officer John Blake (Joseph Gordon-Levitt) who idolises Gordon but who also feels that the Batman was wrongly accused. The third film in a sequence shouldn’t do this (see the missteps of Spider-Man 3 and X-Men: The Last Stand, which all suffered from an overload of characters, among other things) but Nolan is able to handle this and still make a thoughtful analysis of a comic-book character in the middle of a huge action film. And he does it using No Man’s Land and Knightfall, two Batman stories from the 1990s.

This film isn’t perfect – there are several plot holes that are there because they need to be for the plot instead of the impeccable logic of a Nolan film, and I particularly didn’t like the bit about the letter in Gordon’s jacket being found by Bane (oh, and where’s the Joker if all the prisoners have been released?) – but here’s the thing: I don’t care. I was too busy enjoying the film. It was a fitting and operatic conclusion to the story that started in Batman Begins (there are several flashback moments to link to various points in this film) and was a plausible exploration of the character – not in the sense of ‘If Batman were real …’ but in applying some real-world logic to the possibility and not being afraid of the ramifications or the comic-book aspects of the character. For example, saying that being the Batman had ruined his cartilage and the fighting had left him with head trauma acknowledges some reality; however, the film uses Bane (Bane, for goodness sake – the character has always looked silly in the comics, he looked ludicrous in the woeful Batman & Robin, and yet here he is portrayed by a good actor with the face mask and it’s completely plausible) and Catwoman (I was pleasantly surprised by how well Catwoman worked in the film – I had been worried by the costume in the posters, but it all worked on the screen, helped in no small measure by Hathaway’s great performance: you can see why people have been talking about the possibility of a spin-off film) and even the spine breaking. It shouldn’t work but it does.

Nolan has done a great job of imposing his vision on such a big canvas, as he shows Bane taking over Gotham on a grand scale, yet making it about the characters. He’s helped by the actors here: everyone is really good, including Gordon-Levitt, Michael Caine and Morgan Freeman, and you can see why he likes to use a troupe of actors (Caine, Hardy, Gordon-Levitt, Cotillard and Cillian Murphy were all in Inception; Bale and Caine were also in The Prestige). It’s also about ideas as well: the current economic state plays a role in the film as the poor of Gotham take back from the rich elite. Nolan has considered the idea of Batman and what it can mean, and he puts layers of meaning into the different aspects of various parts of the film – even the title can refer to several different meanings for different characters. And he does it all with his trademark brio and misdirection, yet he left me smiling like a giddy fool – I was grinning for the last five minutes of the film with the reveals and in-joke and the possibilities and the resolution, which all fitted together and made sense and left me completely satisfied by the film and the trilogy.

Notes On A Film: Daybreakers