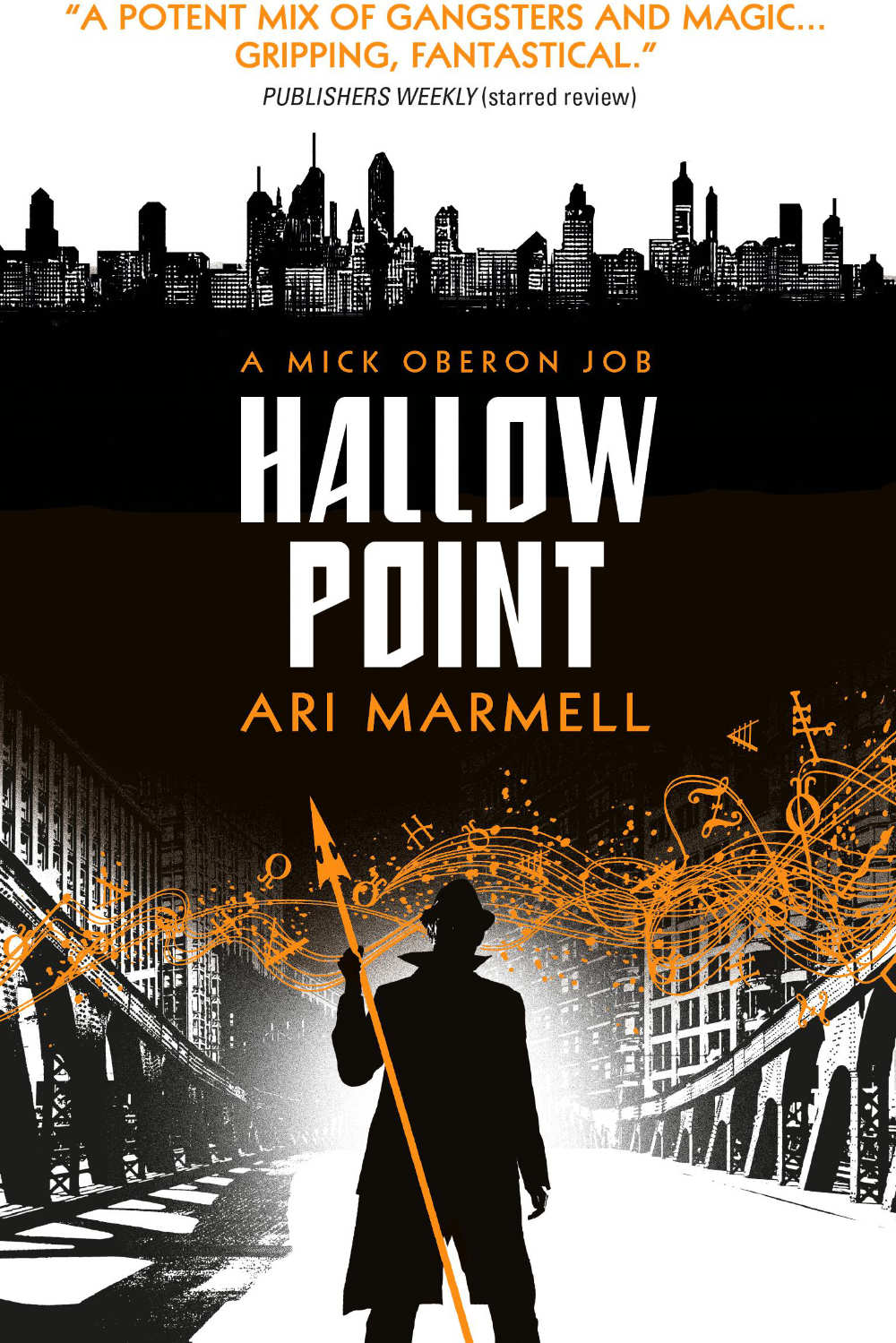 I really enjoyed Hot Lead, Cold Iron, the first Mick Oberon job, so I was delighted to get a chance to review the second book, Hallow Point. Oberon is a private detective in 1930s Chicago, except that he’s not a normal bloke: he’s a former prince of the Fae (the aes sidhe) who left it all behind and came to live in our world; the presence of so much iron is unpleasant, but he puts up with it because he doesn’t want to be back in Elphame, in the Otherworld Chicago that exists there. He has his wand, with which he can steal luck and transfer pain, the Fae ability to enforce his will on humans, and little need for sleep or food (except for warm milk, with the occasional bit of cream as a treat).

We meet him this time round on a missing person case, when his cop buddy Pete comes to him for help (Oberon helps out Pete since Pete was bitten by a werewolf, so has to stay locked up for three nights every month): there’s been a break-in at the Fields Museum of Natural History. However, nothing seems to be have been stolen; instead, something seems to have been left hidden among the other artefacts. When they arrive, at a scene that was a simple break through a window with no alarms triggered, they discover that the new artefact has been stolen, and then Oberon comes into contact with Herne the Hunter, an encounter that leaves him the worse for wear and warned off the search for this new artefact, an Iron Age spear of some sort.

When Oberon returns home, he receives a visit from an officer of the Seelie Court (the court that rules Elphame), asking him the whereabouts of the missing item, indicating how important it is. Then he receives a visit from a woman, Ramona Webb, who is having troubles with her ex-boyfriend and a cousin and money they owed to various bad people. She needs Oberon to find them and to protect her. Also in the mix is a strange southern lawman who is following Oberon, someone who can make Oberon feel like prey, overcoming his own emotions (something very difficult to do to a Fae). Then things get even worse, as Oberon is forcibly invited to a meeting with the Unseelie boss, Lady Eudeagh, who controls the Fae equivalent of the mob – she uses the marker acquired from Oberon in the previous book to get Oberon to bring her the spear (bring, not just find it), leaving him with a bunch of nasty redcaps and a boggart to keep tabs on him back in our world. Things do not look good for Oberon, but he’s a private detective – it goes with the territory.

Oberon has to run down leads (a dvergr fence called Hruotlundt, a low-level leprechaun called Franky Four-Leaf, the gangster family he helped out in the last book) while avoiding the other supernatural creatures in town because of the spear (bagienniks, River Fae from Eastern Europe; a rusulka, a river nymph/siren/mermaid creature; the southern lawman who is part of the Wild Hunt, which destroys areas during its hunt; a bean sidhe, a banshee who is an official emissary of the Seelie Court disguised as a high-ranking federal agent) and with Ramona in tow because it’s the only way she’ll let him protect her. All because he can’t renege on his marker: if he did, he would lose all Fae protection for a year and a day, meaning anyone could do anything to him with no legal repercussions, plus losing all his mystical ability with luck and becoming a beacon to bad guys who want to destroy a vulnerable aes sidhe. When he discovers that item he’s looking for is a powerful spear that was one of the four hallows of the Tuatha Dé Danann, the original lords of the Fae, and whoever gets it will be unbeatable in battle, he finds himself in a real pickle …

Marmell has found a good seam to mine in a Fae private detective set in the recent past: it allows for the full realm of folklore characters to inhabit the book, which contrasts with the not completely mundane world of Chicago in the 1930s. The mix works well, as does the comparison between the legal and criminal enterprises on both sides of the divide. Plus, there are mythical creatures. Marmell leans into the hard-boiled narration, making the prose style sound like someone from the era: ‘She stole into my office like a snake in a fox fur-and-human stole, dress of forest green rustling and sliding as if it couldn’t wait to be shed … I always did wanna start a sentence like that.’; ‘Can I tell you, again, how swell it is not to sweat?’; ‘Well, you remember my place well enough, year?’. And he also makes a point of saying that the missing person case is completely incidental to the main story and that you shouldn’t expect it to tie into events, which is very unlike the traditional pattern of private eye stories. The narration also deliberately hides elements so that the reveal can be more dramatic – which sounds about right for the Fae.

The story has a sufficiently dramatic and exciting resolution, with twists and turns you would hope for, and it also sets up events for future books, providing plenty of scope for the interaction of all manner of creatures in both realms. Marmell has written another enjoyable read – sharp, enjoyable, intriguing, colourful – and I’m looking forward to the next one.