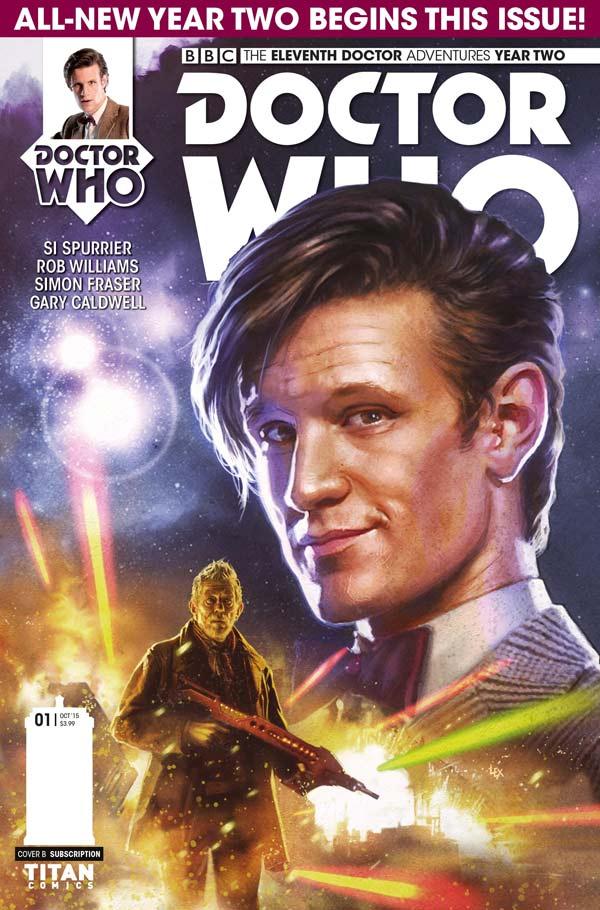 The Eleventh Doctor (Matt Smith) is travelling with a new companion, Alice Obiefune, a library assistant from Hackney. We first see them trapped in large tubes that are timeless pocket dimensions, at the hands of the Overcast, who have found the Doctor guilty in absentia of the crime of the systematic annihilation of fifty generations of their people. The Doctor escapes, obviously, but they are chased by The Malignant – they are a curse, supposedly created by the Doctor 1,200 years ago, when he meddled (as the War Doctor) with the benefactor-race of the Overcast, The Cyclors, somehow turning them into The Malignant. The Doctor and Alice are rescued by The Squire, an old woman in armour who knew and travelled with the War Doctor, only to be chased by a dangerous bounty hunter called The Then And The Now. They think that entering the Tardis will save them, but there is a worse mercenary waiting for them inside …

This reads like the modern Doctor Who television show in comic-book form – we are thrown into the middle of the action, danger after danger is piled onto our protagonists, running along corridors (as commentated upon by the Doctor), lots of snappy dialogue and funny lines (‘It’s just a bow tie.’) and connecting threads of the various incarnations of the Doctor (there is a nice visual of several different Doctors caused by an attack by The Then And The Now). Spurrier and Williams seem to work well as a writing team, creating a fast-paced adventure that feels a seamless blend of the two writers and that entertains. The idea of a subsequent Doctor being held to account for the actions of the War Doctor is a solid premise for a comic book, and it keeps the tone of the new Doctor Who of examining different aspects of the same character in different settings.

On the art front, Fraser has a style that is perfect for the tone – he does enough to ensure that you know it’s the Doctor without having to be tied down to likenesses, his artwork is a pleasant mix of cartoony and realistic so that there can be images of the Time War and the serious threats but still not jar when humour is present in the facial expressions, and he has a nice sense of design for the alien worlds plus a handy eye for action, so that panels swoosh and hum past in an enjoyable blur of frenetic motion, again in keeping with the current version of Doctor Who. It’s an enjoyable tale with a nice twist end (a treat for long-time fans of the Doctor Who comic books) that sets things up nicely for the next issue. This issue may come after a multi-Doctor event, but you don’t need to have read it to follow this book – I hadn’t read the previous story, and I enjoyed it just fine.

Disclosure: this book was provided as a PDF for review purposes.

From A Library: 52 (The Entire Thing In Four Volumes)

From A Library: JLA/Avengers