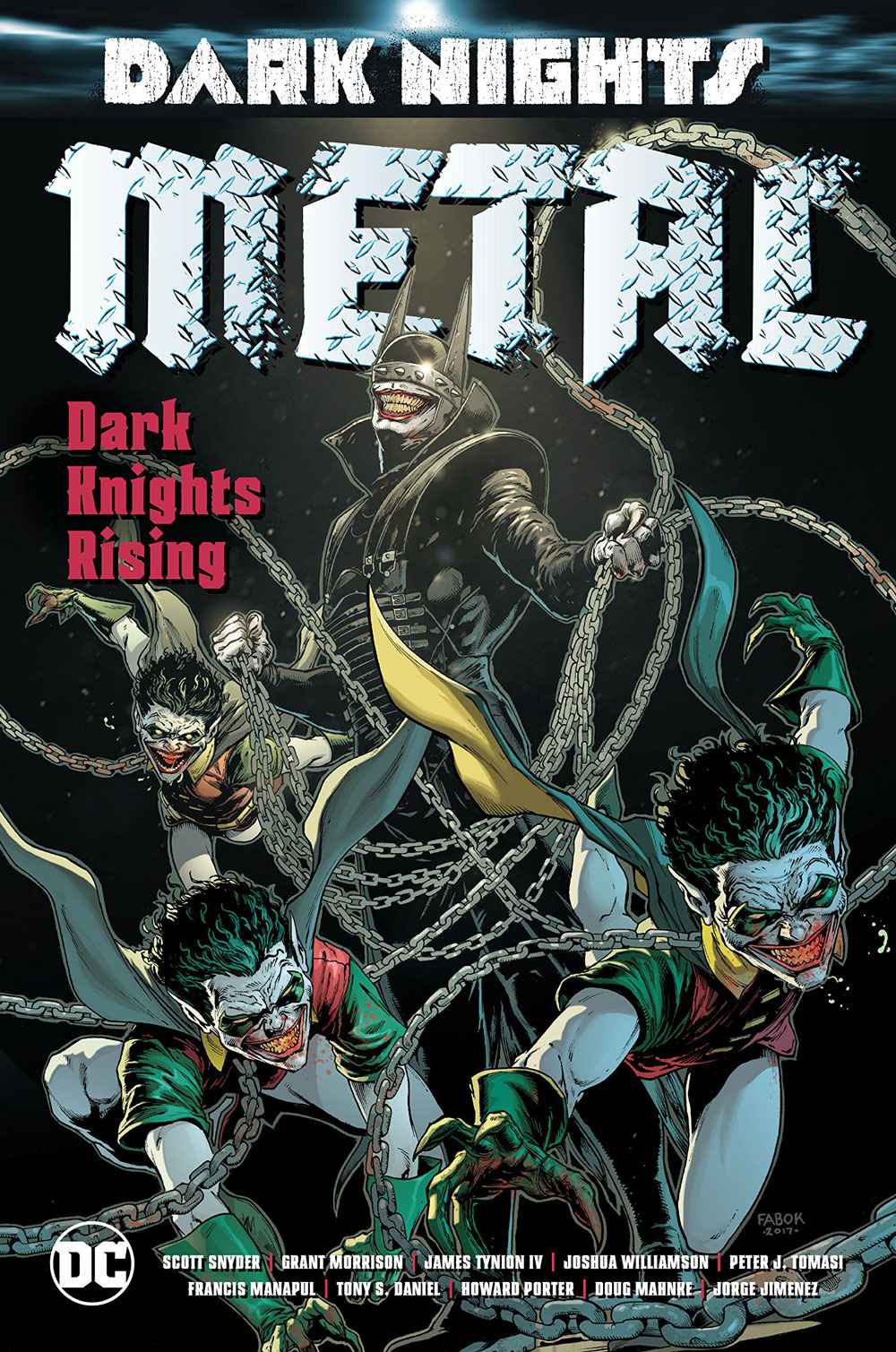 I have to confess that I haven’t read Dark Nights: Metal, the series by Scott Snyder and Greg Capullo that is the wellspring from which this collection of one-shots is derived. Despite enjoying Snyder and Capullo’s run on Batman, and Dark Nights: Metal is a continuation of that run, the title of this new series made me think that you should read it while listening to heavy metal music and putting my hands into signs of the horns (I doubt that this is the case, but first impressions stick). Therefore, I came to this collection with a fresh perspective and could read these stories unaffected by events in the main title.

Essentially, the comics are origin stories for the ‘Nightmare Batmen’, Batmen from the Dark Multiverse (beneath the main Multiverse of the 52 worlds of the current DC universe), who are the main villains of the Dark Nights: Metal series. The Batman Who Laughs (a Joker Batman), who collects and leads the other Dark Knights; The Devastator (a Doomsday-infected Batman); The Merciless (a Batman who wears the helmet of Ares); The Drowned (a female version of Batman who is like a dark Aquaman); The Red Death (a Batman who has stolen the Speed Force from the Flash); The Dawnbreaker (a teenage Bruce Wayne who received a Green Lantern ring at the moment of his parents’ deaths and used it for darkness); The Murder Machine (a cyborg Batman). As you can see, they are each counterparts of the current prime members of the Justice League, a sort of Evil Batmen Injustice League if you will.

These comics relate how they changed from being typical Batmen in their own multiverse into the twisted versions they are now and how they were collected by The Batman Who Laughs, who is under instructions from the dark god known as Barbatos to infect the Multiverse with their darkness and overwhelm all Earths; the worlds of these Dark Knights cannot survive because of what their Batmen did to them, so The Batman Who Laughs tempts them with the idea of another Earth they can dominate. Williamson and Di Giandomenico relate the tale of The Red Death; Tieri, Tynion and Federici reveal The Murder Machine; Humphries and van Sciver take on The Dawnbreaker; Abnett, Tan and Kirkham give us The Drowned; Tomasi and Manapul show us The Merciless; Tieri, Tynion and Daniel provide The Devastator’s background; and Tynion and Rossmo are behind The Batman Who Laughs. Snyder and Morrison join Tynion and Williamson as writers (with art from Porter, Jimenez, Mahnke and Mendoza) of Dark Knights Rising: The Wild Hunt #1, an interlude tale between the penultimate and final issue of the main Dark Nights: Metal series. This means that, apart from the basic concept, there is no cohesive storytelling between the creative teams (as can be seen in the variation of teeth colour for The Batman Who Laughs, which is yellow in some books, but is white in other books), which leads to a multitude of perspectives.

The main selling point is the art: the quality of artists on these books is very high, with Di Giandomenico, van Sciver, Manapul, Daniel and Rossmo delivering the goods as A-list artists. They are different artists but each brings their own approach to a similar overarching idea – the joy of tie-ins to a company-wide crossover is seeing artists working on characters they wouldn’t normally be drawing, getting to see each artist’s version of this multiverse. The only issue with art troubles is the The Wild Hunt, which suffers from too many cooks trying to do too much in not enough space, doing different pages in the story so that there is confusion and bad panel transitions that lose clarity.

The other selling point depends on your love of What If…? concepts as applied specifically to turning Batman into a supervillain. If you want to see Batman turned into the Joker and then applying Batman logic onto Joker madness and killing his sidekicks, or Batman injecting himself with Doomsday virus so he can kill Superman, or Batman killing the Flash so he can steal the Speed Force and try to turn back time, or a young Bruce Wayne using a Green Lantern ring to kill his parents’ killer (and various Batman villains, and Jim Gordon, and the Green Lantern Corps), well, this is the book for you. Personally, I don’t enjoy seeing so much impaling and slaughtering and murdering in my superhero books, but your mileage may vary. The inventiveness of these twisted versions is impressive, and the constant need for new villains for our heroes means that new ideas come from strange and disturbing places, and turning Batman into everything he stands against holds a certain morbid fascination.

There are some comic book pleasures to take from this collection, even if all the death doesn’t float your boat. The Batman Who Laughs is a truly unhinged, terrifying villain who can engineer pain and death on an unimaginable scale and is a suitably dark vision (albeit one with hints of Judge Death to long-term fans of 2000 AD). The sight of a female pirate Batman spewing oceans of water from her mouth is something I’d never seen before in my years of reading comic books. The double-page spread by Rossmo of Batman cracking under what the Joker will do is a potent visual. The charms of the origin of Bobo the Detective Chimp. The glorious use of colour in various visuals in The Red Death story (and kudos to the colourists for their work, having to use a lot of black but not letting it consume the pages unless story dictated it). A good line here or there (Raven: ‘My dad’s a demon. That doesn’t make me a goth.’) to bring a smile to the face. If you are a fan of extremely bleak alternate Batmen, then you’ll find a lot to enjoy in this collection of seven very dark Dark Knights.

From A Library – Batman: The Cat And The Bat