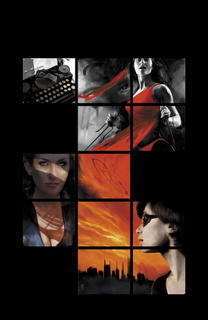 Daredevil #77
I don’t think Marvel likes to give titles to individual issues anymore, not like the old days. However, if they did, then this would have to be ‘Daredevil’s Dames’ or something, as we spend most of the issue with the women who will be impacting the life of Matt Murdock in this last arc from Bendis & Maleev. This comic seemed even more talky than normal, suggesting that women like to talk more or something, and Maleev expands to more double page layouts to accommodate all the information. Maleev is a very enjoyable artist, with his expressive, grainy and moody artwork telling the story and providing an evocative tone. And he draws beautiful women too … Bendis is moving all his pieces into place for what I hope will be a very satisfying conclusion to his run.

Jack Cross #2
I’m enjoying this, even if I can’t work out how it exactly fits into the DC Universe, except for the muted artwork of Gary Erskine. He’s a great artist, as demonstrated by the four page sequence of gunplay in the cars, but it’s like all the energy, detail and verve of his art has been diluted out in order to sell it as a mainstream book. This is a shame, as it was his mad detail that made him something special, like the Dark Horse book, Hypersonic. Still, he’s a good storyteller, allowing Ellis to get on with his usual excellent job of dialogue, characterisation and well-researched, tight plotting. I’ll be interested in seeing what happens when Jack meets super-heroes …

Legion of Super-Heroes #10
This is where it gets really good. The LSH in action, the mention of Shrinking Violet (‘Atom Girl, you mean?’), the splitting up of legion into three teams, Projectra demonstrating spirit, a nice moment between Brainy & Dream Girl – all before Waid shows that the greatest victories come from beating an enemy that is better than you, by having them strategically ahead of the LSH. The suicide bombers is a little close to home for a Londoner like me but reality and fiction often interact at the strangest places. Kitson’s clean lines are back for a full issue all characters easily discerned and given moments. This issue is the reason for yet another revamp, especially when real sadness, seen at the end, seems to be integral to this version.

PvP #19
It always feels a little odd reviewing PvP, as it is a collection of strips rather than a ‘proper’ comic book but this is an issue which demonstrates that it’s not about just gaming. The first half is standard sitcom territory with some nice lines: ‘So … what happens next? Do we all get naked or do I watch you two?’ and ‘She’s a college girl gone wild! The videos are true, Cole.’ and ‘How do you like me now you floppy eared son of a bitch!’ The enjoyment depends on how much you like the people and it is in this regard that Kurtz really shines, with his sharp visuals and strong characterisation make comic strip individuals feel like real human beings.

Strangehaven #18
In his diary at the front of the book, Gary Spencer Millidge reminds me that this book has been going for just over ten years. Wow. I think it’s a testament to the quality of this book that it is still going and I still look forward to it, even though there have only been 18 issues in all that time. (How does he survive financially, I wonder?) This issue feels plot-heavy, perhaps because it’s been a while since the last one, with Alex accepting the invitation to join the knights in the role of spy, Sergeant Clarke investigating the attempt on Dr. Houseman’s life, and the final scenes at his twin brother’s house. The misunderstanding from Janey about Doreen changing a t-shirt scene I found annoying, but I’ve always had a low tolerance towards the ‘oops, vicar, where’s my trousers?’ school of farce that is long standing in this country. However, this felt liked a packed story and I hope Millidge is able to get Book 4 out on a more regular schedule, as this is a great book by a talented writer-artist, even if he suffers from the unfortunate disorder of being a Chelsea fan.

From A Library – Spider-Woman: Origins