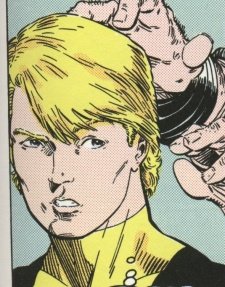 Doug Ramsey had the mutant ability to understand all forms of language and communication. Somehow, this enabled him to become a member of the New Mutants, meaning he was constantly in danger of being hurt in fights with other mutants and dangerous super-powered beings. Fortunately, his friendship with a techno-organic alien being called Warlock allowed him to go into battle with his friends when he was protected by the living metal of Warlock’s body. He died stopping a bullet aimed at Rahne Sinclair, aka Wolfsbane. Any resurrection ideas or mention of Douglock are ignored for the purposes of it being stupid.

What is your idea of perfect happiness?
Not being dead.

What is your greatest fear?
Coming back to life as Douglock.

Which living person do you most admire and why?
All of them, for being alive.

What is the trait you most deplore in yourself?
Whining about not being allowed to fight, even though I had no physical powers.

What is the trait you most deplore in others?
Silence.

What is your greatest extravagance?
Allowing an alien organic being to merge with me so that I can live the dream of being a hero.

What is your most treasured possession?
My brain.

What do you most dislike about your appearance?
The lack of sexiness I brought to spandex.

What is your most unappealing habit?
Whining. Whinging. Moaning.

What is your favourite word?
You can’t ask that of someone who understands ALL languagues – all words are my favourite.

What is your fancy dress costume of choice?
Alien robot.

Cat or dog?
Dog, if only because of Wolfsbane …

What is your guiltiest pleasure?
Being a member of the New Mutants (while alive).

To whom would you most like to say sorry and why?
To Betsy, for putting her in the uncomfortable situation of fancying me but not being able to do anything about it.

What or who is the greatest love of your life?
Rahne.

Which living person do you most despise and why?
The bastard that shot me.

Have you ever said ‘I love you’ without meaning it?
Never, not even in a foreign language.

Which words or phrases do you most overuse?
I’m Doug Ramsey, and I’m dead.

What is your greatest regret?
Not getting a sexy secondary mutation that would make me more viable for a superhero team dependent on physical attributes.

When and where were you happiest?
In the hey day of the New Mutants, the Claremont years, drawn by Sienkiewicz and Art Adams and Alan Davies.

How do you relax?
Surfing the web in Chinese.

What single thing would improve the quality of your life?
Life.

What do you consider your greatest achievement?
Didn’t get to be alive long enough, I’m afraid.

What keeps you awake at night?
The fact that all other mutants seem to come back to life, but I seem to be the Barry Allen of X-World, except I didn’t save the multiverse.

What song would you like played at your funeral?
Happy Talk (except they didn’t play it, the bastards).

How would you like to be remembered?
At all would be nice.

What is the most important lesson life has taught you?
Having a non-physical power in a world where there is a lot of fighting between powered individuals is not a good idea.

Links, for the memory….

I Need A Clone To Do My Blogging For Me