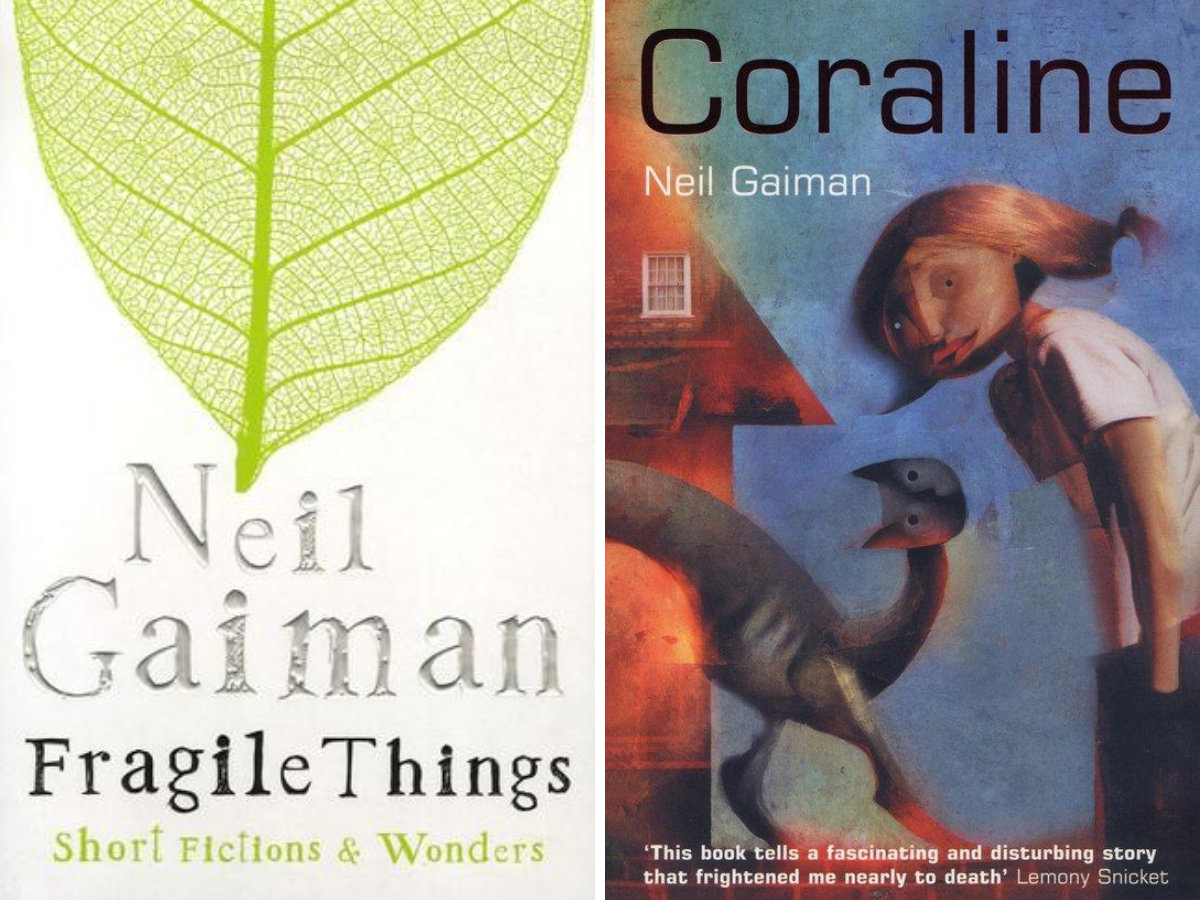 Not only do I read a lot of comic books that my local library is so kind to stock for me, I also read the ‘normal’ stuff (you know, without pictures) as well. Apparently, they have a lot of those sort in the library too … I reviewed Eternals yesterday, so it made sense to talk about some of Neil Gaiman’s books I’ve read recently.

Fragile Things
This is another collection of fiction pieces from Gaiman: poems, very short stories, longer pieces – the highlights are the first and last stories. The first tale is A Study In Emerald, in which the world of Sherlock Holmes meets the world of HP Lovecraft (and won the Hugo Award in 2004) in delightful combination and a lovely twist. The final story is Monarch of the Glen, a novelette about Shadow, from American Gods, featuring Mr Alice and Mr Smith from an earlier story in the collection, which is inspired by Beowulf.

Messrs Alice and Smith feature in Keepsakes and Treasures, about Mr Smith meeting Mr Alice for the first time and the Treasure of the Shahinai, and is an interesting little story that makes me look forward to the future story promised by Neil about how they part ways. There is also The Problem of Susan, which are Gaiman’s thoughts on the Narnia stories and Lewis’ attitude to one of characters, an interesting if unsatisfying diversion. Sunbird is a nice story Gaiman wrote for his daughter’s birthday about a club for people who have eaten everything except for the delicacy of the title. This is an unusual collection of the many different fictions of Gaiman, with some true gems.

Coraline
The story of a young girl, Coraline (definitely not Caroline), who enters a world on the wrong side of a door in her new home where her other parents want to keep her there forever. This other world is similar to the real world, but different, with strange counterparts to the inhabitants of the flats in the converted house in which Coraline lives happily with her real parents. However, she is too smart, determined and resourceful to let that happen. Accompanied by the unusual yet strangely appropriate images of Dave McKean, this a book for children the same age as Coraline who will see adventure in the world which might be seen as scary and know that being resourceful will win the day (and not strength).

Gaiman brings his talent for making a world seem so real through his prose and parlays into a younger reader world without losing his clarity or gift for storytelling. This is quite a gift – to be able to tell tales no matter the age of the reader, and stay free to oneself as a writer and the reader. Coraline is a thoroughly engaging heroine in a scary-exciting world.

The Day I Swapped My Dad For Two Goldfish
This is how much I enjoy the storytelling of Neil Gaiman: I read a children’s book that he wrote. And, seeing as the library had a problem when they reserved it for me (the wrong code had been stuck on the wrong book, meaning they had reserved another author’s book about teddy bears or something, and I had to go to the trouble of getting it all sorted out, in the children’s section of the library), it goes to show the strange kind of person I am.

This is a wonderful premise for a story – only a child would think of it – and the simple, clear prose and strangely appropriate art of McKean (odd, angular but slightly otherworldly, mixed with a strange realism: for example, there is a drawing of a boy thinking while sitting on an improportionally high-backed chair, with Da Vinci-style diagrams in his brain) come together to provide a thoroughly charming book.

It is funny and true and unreal all at the same time (Lines like ‘She only calls me Young Man if she’s very, very mad.’ or ‘‘‘Oh-oh,’’ said my little sister.’ had me smiling and nodding my head in agreement). As the title states, the boy has swapped his father for two goldfish; his mother forces him to get his father back, only to find he’s been swapped for other things along the way: an electric guitar, a gorilla mask, a white rabbit. Dad hasn’t noticed; he’s been reading his newspaper, which is all dads do all day, isn’t it? The only thing he does is say, ‘Children’, in the fatherly way, to the children when they are arguing. I wish I had had a book like this when I was young.

From A Library – New Excalibur TPB 3: Battle For Eternity

From A Library – Elektra: The Scorpio Key

From A Library – Wolverine: Enemy Of The State