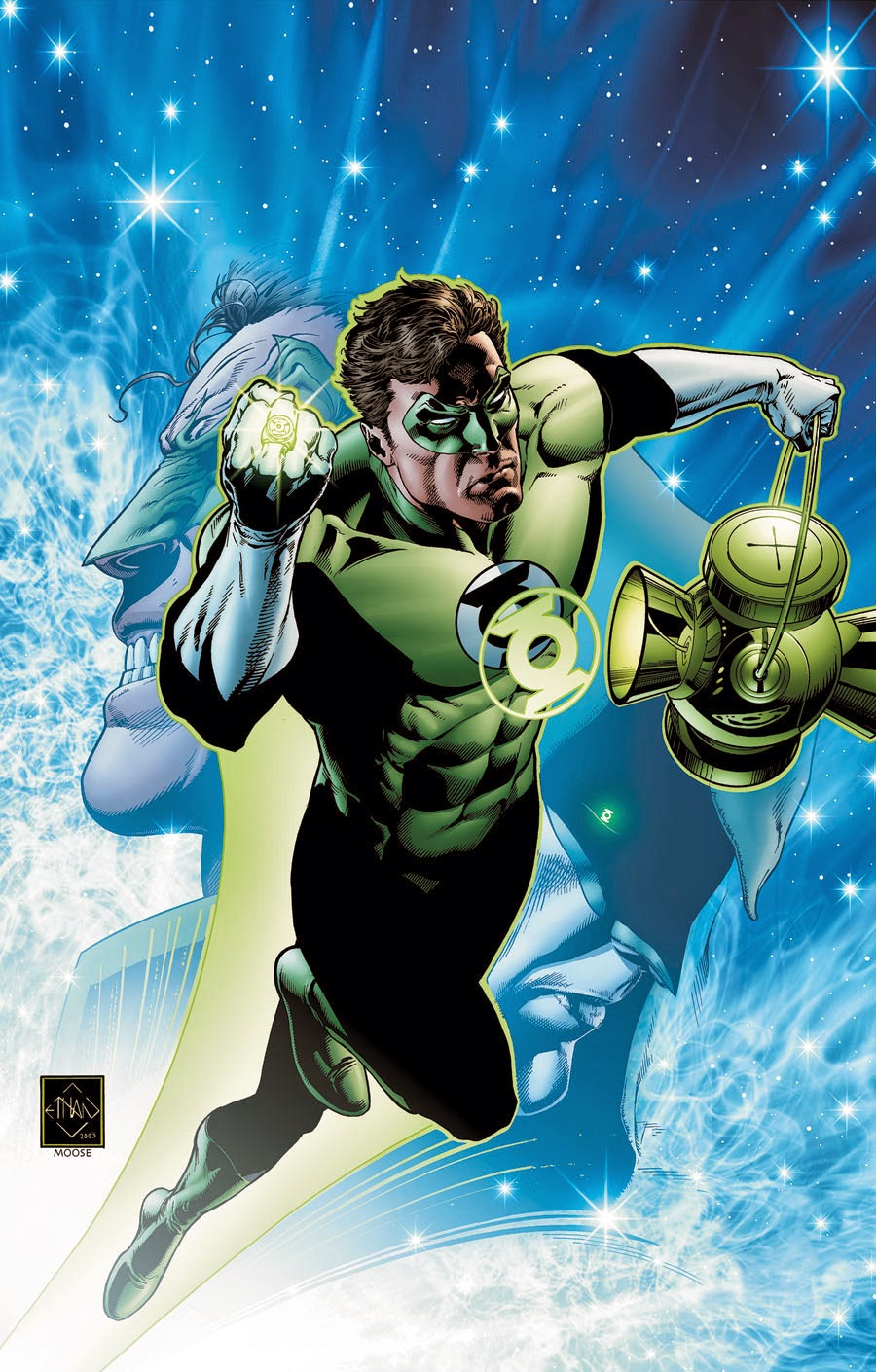 Having enjoyed Geoff Johns’ Superman and the Legion of Super-Heroes [LINK], I’ve become inclined to try more of his work (via the library, naturally). I’ve never been a particularly big fan of Green Lantern, I don’t really care about Hal Jordan versus Kyle Rayner, so I can be considered a clean slate for this story, which is the return of Hal Jordan to the position of Green Lantern. It is essentially a six-issue reset button for the character – this is fair enough but it had better be a good story and it had better be told well. Fortunately, this series is a success on those counts.

The debate over turning the Silver Age Green Lantern Hal Jordan into the villain Parallax has raged since it happened back in 1994. It’s amazing to think that, 15 years ago, a publisher would decide the best way forward for a beloved if poor-selling character would be to eliminate them and start again; now, the entire point of mainstream superhero comic books is to go out its way to keep the purest version of the original character (see the One More Day storyline for Spider-Man, where he gets to wish away his marriage so that Joe Quesada can have the single and hapless Peter Parker back again). Whether or not it’s best to have Jordan back as a Green Lantern is for others to decide (although the current storyline seems to be selling well for DC, so the fans must want it), but at least he’s not the Spectre anymore …

To accomplish the task of returning the Green Lantern status quo (including reverting Guy Gardner from his Warrior persona to his old GL version), Johns finds a way to explain away the who Parallax thing – basically, it wasn’t Hal, it was a sentient being made of the yellow spectrum of living fear from the dawn of time called Parallax, who was contained in the power battery by the Guardians to contain his destructive nature, hence the yellow impurity in the rings. Parallax is linked to Hal’s soul, which is linked to the Spectre, giving him immense power when he is woken by Sinestro (who was though dead by Hal/Parallax’s hand). So, everything gets restored, the impurity is removed, Hal is back with his ring, the Green Lantern Corps is brought back, Coast City is restored (after its destruction by Mongul back in 1994) and, more importantly, Kyle Rayner isn’t killed off – Johns keeps him as a Green Lantern, which was the sensible thing to do for a character who has been the Green Lantern for the past 15 years.

The details are important but I don’t want to discuss them because the heart of the matter is that the story is done well and we are made to care about Hal and his unswerving nobility – he does the heroic thing because it is the right thing to do. Johns understands this and makes it feasible, not corny; heroism is a good value and should be inspiring. He provides the characters with moments (although he can veer into corny, such as the line about the baseball team’s motto, ‘Aim for the stars’) to emphasise this, such as John sussing Batman’s dislike of Hal (because Hal has no fear, Batman’s main weapon), or Ollie shooting an arrow out of Hal’s ring and explaining how hard it was to force his will power through the ring, or Hal’s return to the scene (‘Get the hell away from him.’), or even his training with the arrogant Sinestro (Sinestro: ‘Never challenge those more powerful than you.’ Hal: ‘Umm … yeah. That’s not gonna work for me.’). There’s even a nice moment between Hal and Kyle, before the Lanterns team up to beat the menace; there’s even time for a silly joke that’s a throwback to the early Giffen & DeMatteis Justice League, as Hal knocks down Batman with one punch.

Sciver does a good job here as well – the Lantern logos in front of the logos on their costumes looks a little silly but it really works. His overly detailed art can be a bit much at times, but he can match the scope and imagination of the Lanterns fighting with their rings: they have to look cool doing it, otherwise it’s a complete waste of such a great concept. He makes them look heroic and determined and sleek: all the things a superhero should be, but he can also draw real people and proper backgrounds and tell a clear story. Together, he and Johns have created a very good story that brings back Hal in the best possible way. And you can’t ask for more than that.

From A Library: Batman and Son