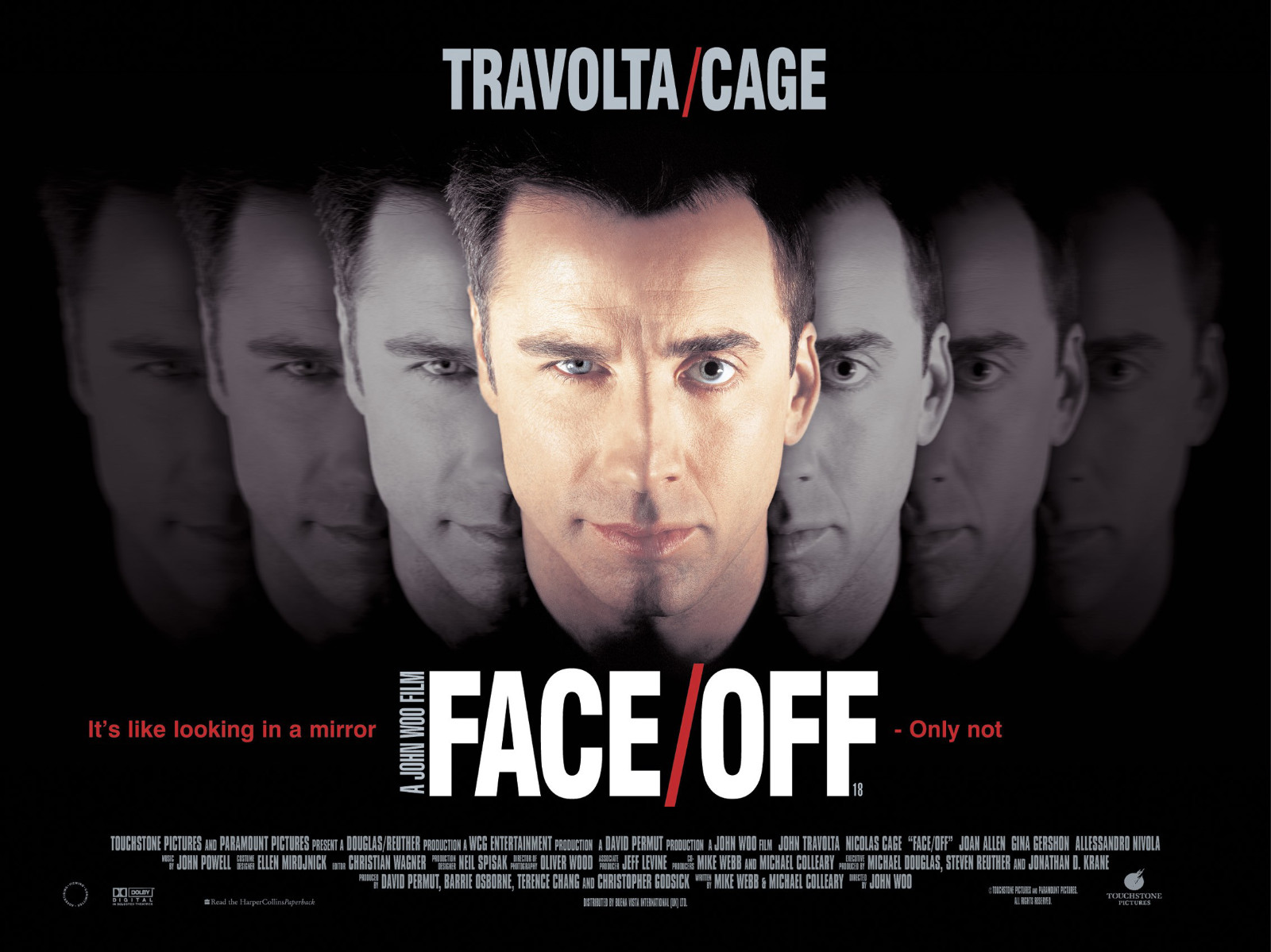 [Another of my film reviews for my student newspaper, this time from 7 November 1997. I remember that I begged the film editor to review this film when it came out, because I was a big fan of John Woo’s Hong Kong films. It was apparently tough to get a preview screening, because it was distributed by Buena Vista, who were tough on allowing ‘unofficial’ critics in. I also remember going to see this in Soho Square, in a private screening room that was the size of a normal cinema; I giggled like a loon through the over-the-top sequences, as the more sober critics watched in silence. I was a little effusive in my praise, to say the least, and I’m not particularly happy with the end result, but I stand by my positive review, which would equate to a DAVID on my film rating system.]

Face/Off may have a strange title, but it is one of the best action films you will see this year. FBI agent Sean Archer (John Travolta) is out to get psychopathic terrorist Castor Troy (Nicolas Cage), who murdered his son. Troy is captured but in a coma, meaning Archer must become Troy via cosmetic surgery, in order to locate Troy’s deadly bomb. In a gory sequence, Archer and Troy have their faces removed and Archer has Troy’s face put on his head. Archer enters prison, not realising that Troy has woken from his coma. Discovering what has occurred, Troy has the surgery performed on himself and takes, Archer’s face, before killing all the people who knew that Archer was now Troy. Archer must escape from prison, recover his face and save his family from a lunatic that everyone thinks is a national hero …

While this may seem alike a confusing premise for a film, it works splendidly. The performances from Travolta and Cage are superb, each impersonating the other’s walks and mannerisms perfectly. The supporting cast are also excellent, but the main kudos goes to the director, John Woo.

Finally allowed a free hand after previous studio interference in his American films, his abilities shine as he shows what he can do with his dazzling camera work slo-mo and choreographed gun sequences in some of the loudest and most exciting set pieces ever seen. However, the film, while an action thriller on the surface, has depth as the two leads become more entangled with each other’s families, coming to terms with the loss of close relatives and with their diametrically opposed characters. This is the sort of high-quality blockbuster you wish Hollywood made more often.

Film Review: In The Loop

Notes On A Film: Ant-Man