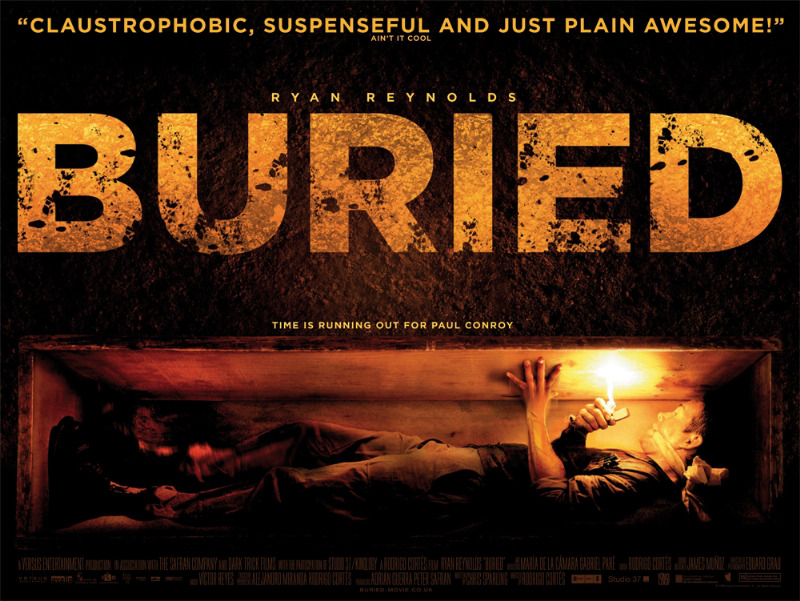 The impressive thing about Buried is that it takes the idea of a 95-minute film about a man buried alive in a shallow coffin and stays true to that concept and makes a completely engaging movie out of it. There is no cutting away to the people outside the coffin – the entire film is about the man in the box and nothing else. It is exciting and tense and compelling, and I think there are three reasons for this.

The first reason is the script: Chris Sparling has written a taut and believable screenplay about a truck driver in Iraq (who is not a soldier) who was in an ambush and then held to ransom (kidnapping being the lucrative market in the region at the time). It keeps the tension up throughout, with new peaks of thrills along the way, and makes you care about what is going on (beyond just the empathy with someone buried alive).

The second reason is the direction from Rodrigo Cortes: keeping viewers enthralled by events on screen that only occur within a small box for 90 minutes is technically impressive. Moving the camera around to enhance the feeling of claustrophobia, seeing the lack of space, with few lights sources to illuminate proceedings, with obvious patches of dark to emphasise the fear. Using a mobile phone and a Zippo lighter, which aren’t on all the time, makes it an impressive achievement that you are sometimes only watching a black screen for several stretches of the movie.

The third reason is Ryan Reynolds: as the only actor on screen for the entire length of the movie, he does a great job. He’s a charismatic screen presence but he hasn’t done many roles that don’t rely on his charm, so this is quality stuff. He shows us panic, despair, anger, hope, rage, and the occasional glimpses of the charm, and is thoroughly convincing  – the start of the film, where the loudest sound is his breathing, and his chesty wheeze of panic was scary. It must have been an exhausting role to play, but Reynolds is fantastic throughout.

I wasn’t sure I would enjoy this movie because I didn’t know if it could sustain its premise for the duration, but it did. The drama is intense, the moments of emotion are heartbreaking, and there are moments of horror that are not about being in the coffin, such as a phone call with someone from the company Reynolds’ character works for that made the audience gasp. This is a great idea, done really well, which will leave you impressed by all aspects of the film.

Film Review: Harry Potter and the Order of the Phoenix