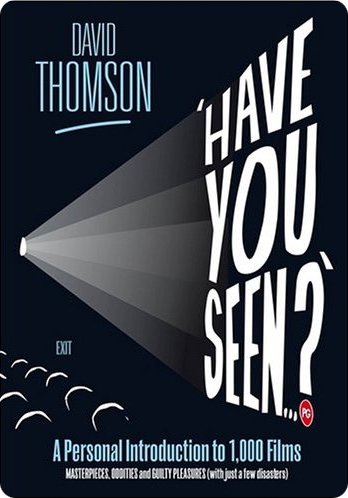 I am under no illusion that my writing about film is worth reading to anyone apart from me, but I still like capturing my thoughts about films. However, after reading the writing about film of David Thomson, my feelings of inadequacy have multiplied a million-fold and I never want to write about film, or anything else, ever again (which is one of the many reasons why I haven’t been writing a lot of film reviews in the past 6 months).

This enormous tome contains 1,000 one-page essays on films (and the occasional television series, such as Monty Python’s Flying Circus and The Sopranos) that mean something to Thomson. Just writing that amount on films is an achievement – most lists of 1,000 films to watch only have a few short paragraphs to accompany a photograph, and from many contributors. However, it’s even more impressive when you actually read the lucid, warm, intelligent, well-informed, effortless prose that flows of each page.

Thomson has seen a LOT of films, has strong opinions on them, but he is also well-read both inside and outside of cinema, something he brings to each piece, which makes the entire book more than merely film reviews. It’s erudite without being dry, passionate without sounding fanatical, and an excellent guide to a wide selection of films from cinema history.

Thomson does prefer films from the distant past over the recent past: fewer than 180 entries for 1980–2007, with the 1940s and 1950s accounting for 40% of the book. However, he isn’t a fuddy-duddy who only likes ‘old’ films – his selection is eclectic and diverse: he includes the likes of Who Framed Roger Rabbit?, Aliens, The Big Lebowski and The Matrix, in addition to the usual suspects (which is also included).

I have to confess that I didn’t read all of the entries – there are a thousand, for goodness sake. They are listed alphabetically, so you can dip in and out (I had a preference for films I have seen or at least heard about), which is perhaps the best approach. The beauty of the writing keeps you coming back for more; his description of a film can make you see things in it you never noticed before, and his turn of phrase can be enchanting. When talking about Belleville Rendez-Vous (or The Triplets of Belleville, the American title as used in this book), he describes the art style as ‘often a little like Toulouse Lautrec dating Betty Boop over an absinthe sorbet’, which is just one example of the delightful language that peppers the essays.

This is an impressive book, and Thomson is an incredible writer on film. Just don’t read it if you ever want to write about film yourself.

Book Review – Selling The Movie: The Art Of The Film Poster

Book From A Library: London Falling