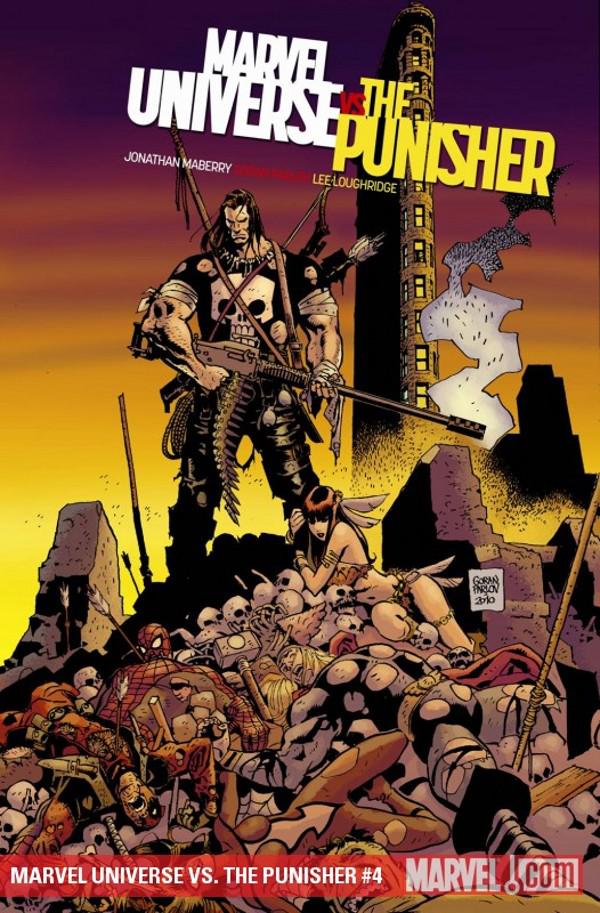 I don’t understand the current obsession with apocalyptic scenarios in pop culture (and comics in particular). I think it is very strange and and seems a bit macabre and depressing, but then I’m not a fan of the endlessly grim story (I don’t read The Walking Dead or Crossed, for example). The reason for trying this book was Parlov: his art is amazing. I talked about how much I loved it in Punisher: Valley Forge, Valley Forge when I ‘reviewed’ it, and I loved it in this collection.

The story: Frank Castle, the Punisher, killed some thugs when he catches them trying to sell secret bioweapons but the chemical was super toxic, which was a shame when it exploded in the fight, covering the Punisher, making him immune to it; however, it then went into the water system, which then turned people into cannibal predators. The world’s population becomes uninfected survivors or super-powered tribes eating everyone else (which means you get to see a variety of Marvel characters, both heroes and villains, in this world gone awry). The only person in the middle is Frank Castle, trying to kill the creatures he believes he created.

There are some nice touches in the tale: Spider-Man is the head of an infected tribe who does a deal with Frank to rescue Mary Jane from another infected tribe run by Kingpin; Deadpool’s healing factor is played perfectly for laughs (Punisher has killed him 33 times but he keeps on regenerating; just before the last time, Deadpool says: ‘Dude, I’m never teaming up with you again’). I’ve never read anything by Maberry before (he’s a novelist who has won the Bram Stoker award) but he does a nice job here. He has a deft touch throughout, especially with the ‘Punisher journal’ narrative (‘War Journal, Day 1,830: Same $?#%, different day.’), which makes for a fun experience in the midst of a story that is set in the ending of the world.

As I said, the art is the real star here. Parlov’s art is simply superb: he has a European style that is craggy and real but with a definite comic book-centric character work. He is still able to comfortably incorporate superheroes into his style so that they don’t look ridiculous, and his style is perfectly suited for this mixture of an urban setting with a barbarian vibe. It’s expressive, dynamic, beautiful, rugged, muscular, visceral, vibrant and sexy. There are some fantastic splash pages, which look gorgeous, but he’s also got great storytelling skills, great facial expressions and fantastic action. He’s a great, great talent and I could fill this post with various images from the book because it’s so good and I could look at it all day. You should read the book for his art alone; fortunately, the story is worthwhile, too.

From A Library – Avengers: Disassembled