As I mentioned in my review of Dead Space Liberation, there were two other Dead Space trade paperbacks released to coincide with the publication of Dead Space Liberation. Dead Space is a six-issue prequel to the original video game from 2008, whereas Dead Space Salvage is an original graphic novel set between first game and the sequel from 2010. Both are written by Johnston, who also wrote the dialogue for the original game, and who has also written many comics in his own right, so he’s the perfect choice to explore the beginnings of the story.

This Dead Space prequel is basically the background to the first game. It starts in media res: P-SEC Sgt Bram Neumann on Aegis VII, recording a message telling people to nuke the planet, then ‘5 weeks earlier’. A mining colony is preparing for planetcrack when they discover a Marker, a large structure with odd markings on it. The Marker is a sacred object to the Church of Unitology (which is NOT the Church of Scientology, despite the error in the character profile for Carthusia, where he is described as ‘a respected pillar of the Church of Scientology’), whose members believe it to be a proof of their faith, so it stirs up religious fervour among Unitologists on the colony. However, people start acting strange: miners are not sleeping, people acting out of character, their tempers turning violent and people having hallucinations of dead people. High-ranking Church members in the government order the Marker to be retrieved to await arrival of the spaceship Ishimura.

Things get worse: Neumann’s P-SEC partner, a devout Unitologist, is one of 50 Unitologists who kill themselves in the belief that the Marker means that they will return. A strange fungus is found growing on the grilles of the air vents. Bad dreams increase, people scrawl messages about the Marker on their walls, increased assaults and murders. Neumann tries to get the colony manager to stop things but he’s not getting in the way of a multibillion-dollar operation, and jurisdiction has been handed over to the captain of the Ishimura, who has enacted a no-fly order after the removal of the Marker. The fungus continues to grow and the planetcrack proceeds – and immediately all the power in the colony goes out and everything descends into madness … Neumann’s girlfriend has worked it out: the carvings on the Marker are instruction for DNA, recombinant DNA that mutates genes (note to the writer: genes can ONLY be mutated ‘at the cellular level’ because it doesn’t exist anywhere else) spread through a specific target vector – necrotic flesh. It infects dead bodies and reanimates it, which can’t be killed and only wants to create more reanimated dead flesh.

This is a slow-build sci-fi horror comic book – it takes until issue five for these Necromorphs and the violence to appear. Johnston takes his time to build up the sense of the people and the atmosphere in the extra room that six issues provides. Johnston uses all the material he created for the game he to tell the story that leads into it, such as the character profiles of the seven major characters before the story, providing background for their actions (such as why Neumann hates the Church of Unitology). This provides some poignancy to the deaths that arrive – you know this will happen because this is a horror book, so I’m not spoiling anything: a situation is set up and the characters are killed one by one, made even more aware of this fact by that this is a prequel. However, the journey is the interesting part and Johnston does make this interesting.

Templesmith’s art is a bit looser and scratchier than his normal style but it suits the book well – he achieves a grungy, lived-in sci-fi atmosphere (think Alien and Alien 3) that roots the horror in the mundanity of a mining operation that happens to be on another planet. His storytelling is much stronger than Shy’s (see below) so you can follow the characters and the narrative more easily. He also understands the placement of word balloons (I think he does the lettering, although the book doesn’t specify), so the dialogue flows around the art more naturally. The collection also contains a short story, Dead Space Extraction, which is about what happens on the Ishimura after the events on Aegis VII, as well as a gallery of Dead Space concept art and Templesmith art (sketches, alternate pages and covers), making for a good overall package. 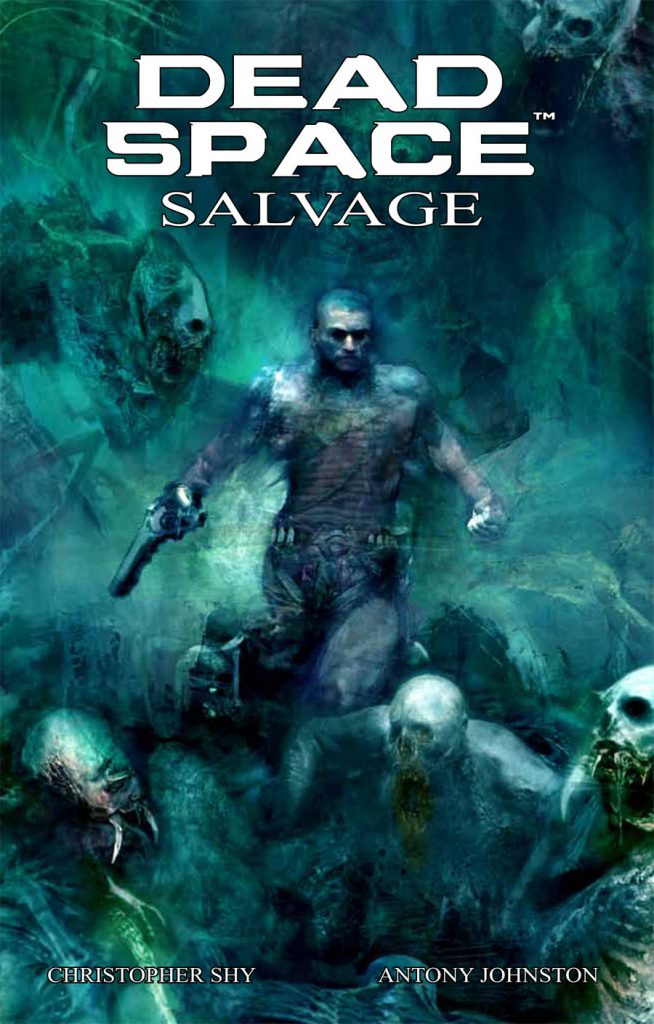 In Dead Space Salvage, things are a bit different. The first half is slow and takes a while for the story to get going. We are introduced to a group of illegal miners who are extracting precious metals from asteroids, when the Ishimura unexpectedly arrives, crashing into the mining ship with all the extracted metals (although you can’t tell this based on the art, which is hard to follow and understand what is actually happening – you have to piece it together from the subsequent dialogue). So they stop the Ishimura from drifting and decide to go aboard to investigate and see if they can make money out of it, only to find fragments of what they think is a Marker. One of the crew runs out with evidence to cut a deal with a nearby government ship searching for the Ishimura, which alerts the agents aboard of the location of the ship; meanwhile, there is trouble aboard the Ishimura for the miners …

Shy’s art is evocative and moody, in his grungy, dirty, washed-out, off-kilter art style, but his storytelling is erratic: panel transitions are problematic, and some panels you can’t work out what is occurring. There are odd choices – a panel that’s a close-up on a hand for no reason, a full-page spread of a woman’s face that isn’t reacting to anything. The dialogue text can be troublesome – sometimes a blue font on blue backgrounds, and no real indicators when dialogue is from someone on radio, making for confusing conversations. It’s also quite large text, not contained by word balloons, so it sprawls over the panels; sometimes, the text sprawls so much it is cut off the bottom of the page, as if the panel trim didn’t take it into account. The fuzziness of the faces makes it hard to keep up with who’s who, not helped by the lack of definition in the majority of the characters, meaning that the book looks like a collection of concept art instead of a real comic book.

There is also a problem with typographical errors: ‘planercracker’ instead of ‘planetcracker’, ‘someone find the bring’ instead of ‘the brig’, ‘and mow we’re in the ship’ instead of ‘now’, ‘alreadly’ instead of ‘already’, and inconsistent capitalisation (upper case after a comma, ‘marker’ and ‘Marker’, ‘Jesus christ’, ‘I guess i got’). This is slightly unprofessional and takes me out of the story, and not what I expect from a re-released comic book. So, I can recommend Dead Space the comic book but not Dead Space Salvage.

Disclosure: these books were provided for review purposes.

From A Library – Batman: Heart Of Hush

From A Library: Mystery Society