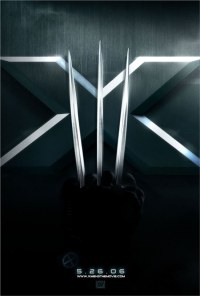 I try to remain impartial when I see a film, to give an unbiased opinion about the movie (as all reviews are – I can’t really call myself a critic, I just liked the name for the blog). However, try as I might, I really can’t be a completely objective viewer when it comes to the X-Men. They are the reason I got into comics, and the fondness I have for those Claremont-written books I read in my younger years is something I will never lose. (An aside: articles in the press mention Lee and Kirby, but when will they give Claremont props? He’s the reason why there are the X-Men films.)

This, then, is a disclaimer: my review of X-Men: The Last Stand is coloured by my inner fanboy. Please take this into account if you continue to read. And, I talk about the whole film, so there are spoilers, but everyone has seen it already, so that doesn’t really matter, does it?

Where shall we start? The first thing to say, I suppose, is that my main problem with the film was that it didn’t feel like an X-Men film, which is the worst crime for the film. Despite having the same writers as the second film, perhaps one of the best superhero films we have seen, this movie doesn’t have the heart or soul; it masquerades as an X-Men movie, using the goodwill of the previous two to bully us through this one. It makes for an average sci-fi flick, using some characters that Marvel happen to known.

Part of this must be laid at the feet of Brett Ratner, the perfectly adequate but uninspiring director, who doesn’t bring the vision or, more importantly, the understanding that Bryan Singer did to the previous films. It was always going to be difficult, especially coming to the project so late, but, while he does merely a workman-like job, the problems with the film are not his alone.

The script doesn’t help. Trying to compress the fantastic overtones of the legendary Dark Phoenix story into the more-realistic world created in the first two, as well as the Joss Whedon story of a mutant cure, into two films is simply too much. There are too many characters, themes and points to touch on to make it a satisfying piece of cinema. For example, the impressive visual that is Angel, pimped in the trailers and the posters, is essentially a cameo. A flashback, a dive out the window, turning up at the mansion, and rescuing his father (and wasn’t that the silliest manner in which to get him to do something heroic – the doctor has been killed quickly by spikes boy, yet the other two have to throw him off a building, just so his son with wings can save him. That is bloody annoying story logic right there.) means that Warren Worthington III can barely justify the action figure. And don’t get me started on the shoddy treatment of Cyclops. Bad enough that he had to sit out most of the second film; now, he doesn’t even justify having his death shown on screen in a moment that has emotional resonance to the original comics (when Phoenix held back his power when he took off the ruby quartz glasses). That’s insulting.

The cast, which was large enough in the second film so that the third would have time to explore them, gets even bigger here, just for the sake of it being a trilogy, so it must be bigger! This means that a lot of characters get shunted to the background. Apart from Cyclops and Angel, Rogue is barely in the film (after anchoring the first one), Mystique is https:\\/\\/www.clandestinecritic.co.ukified early on (which is particularly frustrating after making her such a great character in the films, giving her so much potential, and the ignoring of her by Magneto after her sacrifice, while done to show how cold he is, seems out of character on a personal level), and even characters who have a sufficiently cool visual power to be given screen time, such as Colossus or Shadowcat, barely justify being given names. Hardly any of the newer people make much of an impression, apart from Vinne Jones as Juggernaut, who made an awful impression in that silly body suit. It was fun seeing Madrox, for example, but that was all.

There are some good actors in the film. Hugh Jackman is great again as Wolverine, as are Patrick Stewart and Ian McKellen as Xavier and Magneto (enjoyed the flashback scene that seemed to hint at a more-intimate relationship between them), with the only down point being the regret shown by Magneto at the end when he is depowered and ‘realises the errors of his ways’, which was rather pathetic. Kelsey Grammer was perfect as Beast, in voice and attitude, if not looks, but I don’t think Beast would ever work particularly well in live action. (And would Leech make him defur? I thought that was the result of an experiment gone awry; his mutation is super-agility (and strength and speed), not the ability to grow fur.)

The way the script treats things in general is ill-thought out. The explanation of Phoenix, admittedly necessary in the sci-fi setting of the films compared to the more-natural home of the comics, is shoddy, ignoring the basic reason for the name Phoenix (erm, rising from the dead, yes?). But the Phoenix force is difficult on different scales. She can kill her former lover, her mentor, and prison-loads of soldiers in the final assault, but she can’t kill Wolverine? How does his healing recover from somebody ‘thinking’ them out of existence? It’s not a physical attack that his body can fight; she is doing whatever the hell she wants. Another bit of annoying story logic. Talking of story logic, why didn’t they cure Jean, rather than killing her? It just seems to be the writers following the beats of the comic (having Jean come to her senses and ‘allowing’ Logan to kill her, reflecting the suicide on the moon), rather than understanding why they worked in the first place.

My girlfriend believes that Storm gets more screen time by the deliberate killing of Cyclops and Xavier because she insisted on it in order for the film to have the (surprise) Oscar-winning actress. She may have a point. Halle Berry has been good in a few films, but she is wooden and unnatural as Storm, particularly disappointing for such a strong character. Her increased exposure in this film only serves to highlight her inadequacies in the role. I may be extra bitter because I thought the eradicating of the heart of the X-men (Xavier, Scott and Jean) demonstrated that the filmmakers don’t get the point of the X-Men. They wanted the flash of the Danger Room and the Sentinels (it was fun to see it and the fastball special, but it was a tease and silly excuse to set up the flimsy Rogue–Bobby–Kitty love triangle) and things blowing up, without the understanding that Singer brought to the earlier films.

With Xavier dying, my inner fanboy knew that his brain wouldn’t die, even though it was a surprise when he was actually killed, but it was still silly to see the after-the-credits teaser for possible continuation, especially when they have been banging on about it being a trilogy. It wasn’t a trilogy. The flimsy link of Jean/Phoenix and Magneto through the films doesn’t make it a trilogy; there is no thematic arc over the course of the three films to make anyone think that this was a grand story over three films. Personally, I’ve always thought that the X-Men would work best as a television series (most people know it from the cartoons anyway, showing that it has a pedigree), even if the likes of Mutant X might put people off; it would allow for more exploration of the characters and the themes than a film would allow (see Lost for a good example of excellent juggling of a large cast, which is what the X-Men are about, not the grandstanding of two characters like Wolvie and Storm). I could be in the minority on that one.

The end of the film (the one before the credits) is not the end of a trilogy, which has people looking at graves and Logan looking mysterious, and hinting at sequel with Magneto. That’s not an emotionally satisfying resolution; it’s not even an epilogue. But, then, the film doesn’t feel like a real film; it’s a collection of unconvincing scenes leading to the big fight at the end, where Storm kills out of character, and a small set of inexperienced X-Men fight off a huge collection of powered people without dying themselves.

I’ve seen a lot of reviews of the film where people have said things along the lines of, well, it wasn’t as good as the last film, but at least it wasn’t rubbish, which is what we were expecting with Ratner. This is not a stance I can take. It might have been a decent sci-fi action film on its own, but it was supposed to be an X-Men film and, after the quality of the second film, it should have been a very good film too. It wasn’t. It was okay. And that isn’t good enough for me.

Notes On A Film: Skyfall