Verily, doth my head acheth, so links must sooth mine furrowed brow.

A belated Happy Blogiversary to Mark; one year down, many more to go. Keep up the good work.

Tom’s latest objection of affection, in his sidebar update, is Lisa Edelstein, and he is so right about her being smoking hot (we just had the show where House had to inject her backside – oh, dear Lord, what a lucky man). Which leads him on to say that he is currently reading Hugh Laurie’s The Gun Seller, which I haven’t read in 10 years, which is when it was first published. A cracking read, and it’s a shame that his clinical depression meant he never got round to writing the screenplay.

Empire bases a news item using this Newsarama post [EDIT: dead link] as a source (which is bizarre, because I thought they only used official news outlets, like Variety and Hollywood Reporter, when I did my week of online work experience with them), informing us of the fact that David Goyer is set to write a treatment for Thor. Not sure about this – unless they capture the magic of Simonson’s run, I can’t see it working. Also in the comic book/film overlap, we have the news that the Silver Surfer will be a CGI creation in the second Fantastic Four film. I think this is a great idea, and is the only way to get across the otherworldiness of Norrin Radd (I didn’t want to see a naked man in silver skin paint).

Warren Ellis went to Heroes Con last week, from which he is only now recovering, but it seems that he was the person people wanted to see, based on the coverage he got – two articles on the Wizard site and one [EDIT: dead link] from Newsarama – that are just about him (even if it meant he had to confirm that Fell wasn’t being cancelled). This is solely because he gives good soundbytes: (about Nextwave) ‘You’ve read the book,’ said Ellis. ‘Quite clearly I’m not thinking about anything. I’m just spouting utter f***ing gibberish onto the page.’

Finally, when in doubt, always post a pretty picture. Here is the teaser for the Brian Vaughan-written Dr Strange mini-series (found via Neilalien, obviously), which looks exceedingly cool – I’m looking forward to this one: 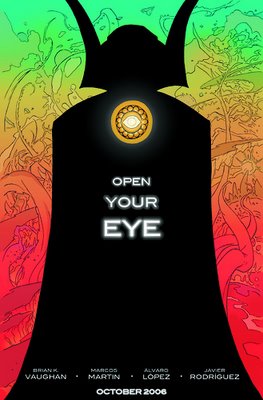