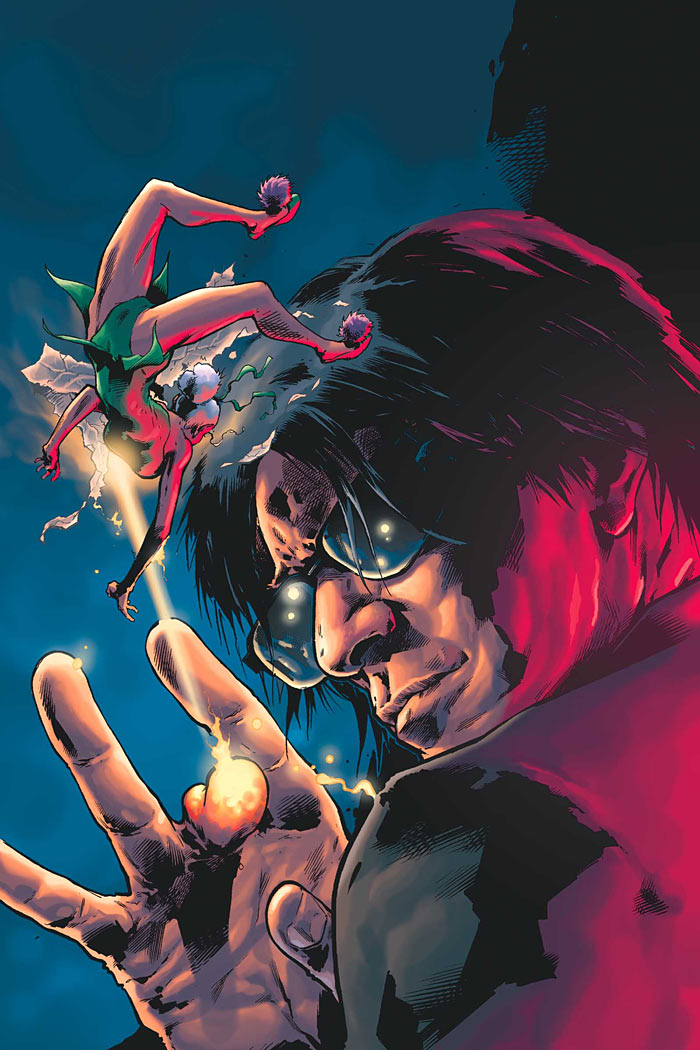 Paul Cornell is another one of those people who could be accused of stunt writing, if you use the cache of his writing episodes of Doctor Who, Primeval (or even Robin Hood) to pull in the punters. But Cornell has been writing genre fiction for quite some time, his name isn’t sufficiently well known, and he’s a Brit, so nobody is going to care that much.

Which is a shame because it meant that nobody paid much attention to this mini-series when it came out. Having read the trade, I’m amazed it was allowed to come out – not that it is bad, quite the opposite, but rather because it is so unashamedly British. The level of in-jokery going on is quite staggering, and you wonder how he was allowed to get away with it.

In Wisdom, Cornell takes the Peter Wisdom character created by Warren Ellis in Excalibur and puts him in charge of a team working for MI-13, the British intelligence agency that deals with weird things. First in-joke: having his boss with the name of Mr Grimsdale (in reference to the boss that English comedian/actor Norman Wisdom would always have to deal with in his films). He is in charge of Tink, a fairy dissident; Captain Midlands, a British super-soldier and complaining old git; John the Skrull, part of the Skrull Beatles; and Maureen, a clairsentinent who joins the team at the start of the series (and is the link for the arc that carries the book through to the end – working on the new Doctor Who and Primeval means that Cornell is used to doing the one-off stories but with a background threat). They even have their own Q, who looks like Charles Hawtrey from the Carry On films, for your next British in-joke.

The first issue deals with fairies being vicious on British soil, which must be dealt with. The second issue has the village of Pantagruel, or rather the sleeping giant buried there millennia ago, waking up and fighting guardians before moving to near Greenland. (The in-joke of the issue being John the Skrull’s dream, which pastiches the Beatles and their films to good effect. There’s also the reference to putting a neighbouring village back in Berkshire, which is going to be lost on anyone outside of England, I would have thought.) Issue three has them dealing with the Welsh dragon (which piles on the Welsh jokes and references thick and fast, as well as including cunnilingus to get its MAX rating because there’s very little else in the series to suggest it required the ‘Explicit content’ tag) and has a guest appearance by Shang-Chi, Master of Kung Fu.

The last three issues deal with the story connected to Maureen that has been reference in the previous three, when a man seems to draw Jack the Rippers from alternate universes to this one – ‘Will the real Jack the Ripper please stand up?’ (with a special appearance by the Jack the Ripper of Alan Moore’s From Hell). It turns out that it is the Martians (from HG Wells) who are using him and Maureen as a gateway into this world for their invasion. And, as with all things in Wisdom’s life, things don’t end happily.

The book is rather enjoyable if a little rushed in places – the pacing in the first three issues seems helter skelter, barely giving enough information and time to understand what’s going on in the comic before coming to the end. The last three issues take a bit more time, but the way that the character of Maureen is set up for her role in the story seemed a little forced and detracted from the enjoyment.

The art on the book changes after issue two – Hairsine leaves to be replaced by Garcia, and his style doesn’t work as well as Hairsine’s. He had very nice character designs that worked well, and Garcia’s style, while good, doesn’t capture the same vibe and energy and doesn’t quite suit the stories (except for the action stuff at the end, and even then his Captain Britain looks a little weird).

I know I shouldn’t compare British writers, but there are elements of Ellis and Grant Morrison thrown into Cornell’s style – the Wisdom–Ellis connection leads to this (with Ellis-like dialogue for the lead character), as well as an almost Authority-like attitude to plot for the sake of explodo; the Morrison connection is the throwing lots of ideas in the mix, and the John the Skrull character (for me, the star of the book) who reminds me of the Mandala character from Zenith and the Skull Kill Krew. However, for his first comic book work, it’s quite impressive, and bodes well for the new ongoing series Captain Britain and MI-13. And surely John the Skrull must play a part in the upcoming Skrull Invasion?