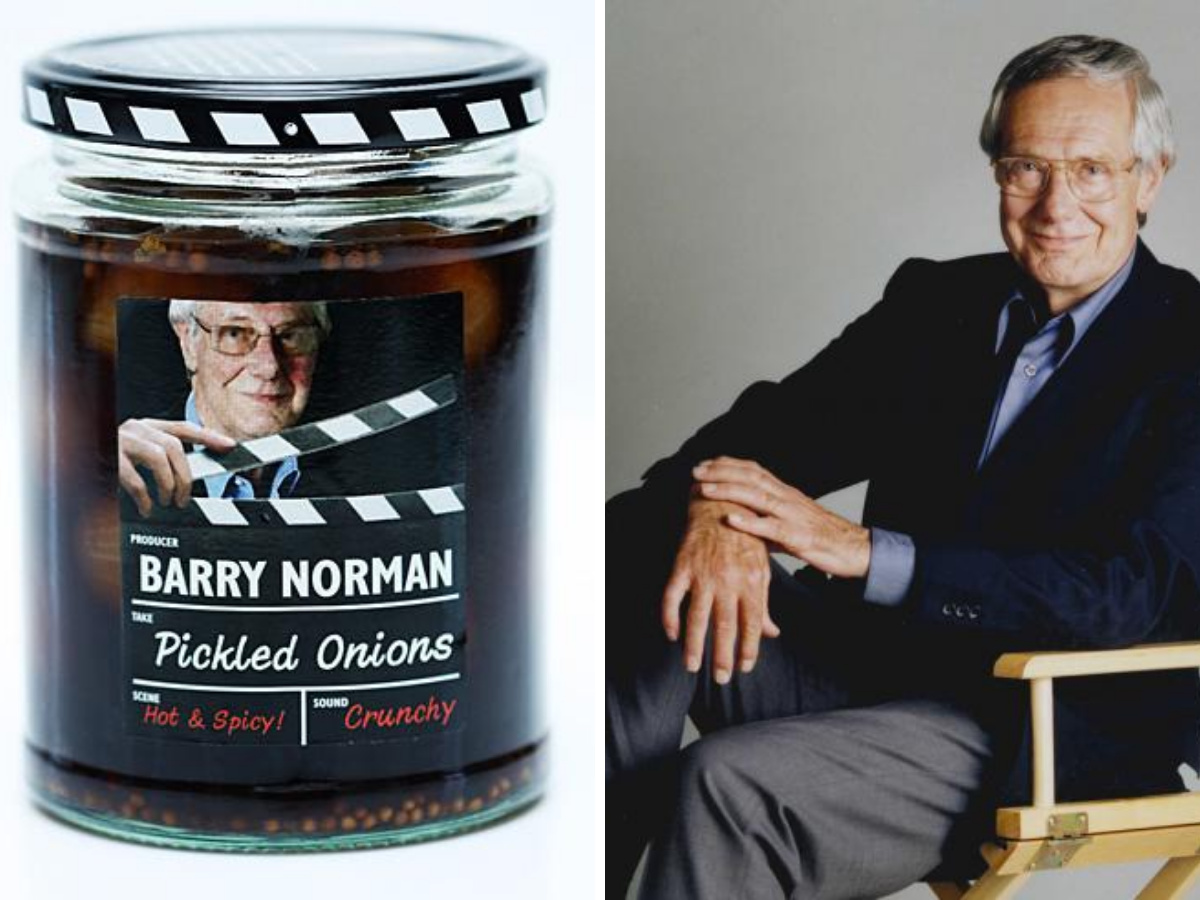 Coming into work this morning, I noticed a bizarre-looking poster at a bus stop: it was advertising Barry Norman Pickled Onions. I thought it was a joke of some sort, perhaps for a new show or game. But it isn’t. It’s a genuine product: you can find the official website for it here, and you can buy them (if you live in the UK) online here.

I’m still a little freaked out.

What the hell is going on in the world that Barry Norman is selling pickled onions? What is the grand man of film-reviewing on British TV doing plastering his not-attractive face on a jar of condiments? Are celebrity endorsed-products (Paul Newman’s salad dressings, Lloyd Grossman’s sauces, Frankie bloody Dettori’s pizzas) the only way to purchase food products anymore?

(By the way, if you are an American, it’s the equivalent of Roger Ebert Pickled Gherkins, if that helps.)

You see, Barry Norman (no relation) was the face of film reviewing to me (and probably the rest of the country) when I was growing up. He fronted the Film programme from 1973 to 1998 on BBC1, meaning he was the film critic for the nation. He was a former journalist, so he had served an apprenticeship on daily newspapers and treated the job with respect (unlike Jonathan Ross does currently as front man for the show – the inclusion of action figures on his desk demonstrates vividly that it’s all a bit of a lark for Wossy, being paid to watch films and tell you his opinions).

Barry had an air of authority on the subject (his father was a film director) but without being poe-faced and aloof (e.g. Brian Sewell on the arts); you could tell he loved film and enjoyed talking about them and to the people who created them (although he found the directors/writers more interesting – he famously didn’t get on with Robert DeNiro, who was providing monosyllabic answers to questions while he begrudgingly went through the interview process).

I always felt that I could trust a Barry Norman review – not only was he spot-on in his judgement, but he delivered his critique in a clear, concise and non-condescending manner. He even allowed his sense of humour to show through (although it took him some time to warm to his Spitting Image puppet, which gave Barry the never-uttered-by-him catchphrase, ‘And why not?’, but which he eventually used for the title of his autobiography), demonstrating he loved his job, knew it wasn’t the most important job in the world, but treated it with respect and a sense of helping the viewers and hopefully the world of film.

I used to watch Barry Norman religiously; the same can’t be said of Ross’ version. I wanted to be Barry Norman – who wouldn’t want to be paid to watch films? – probably because he made it look so easy (it was only afterwards that I found out that he was reading from an autocue; he even made that look easy). I’ve even read his autobiography. I missed him when he left for Sky (after the BBC annoyed him with inconsistent scheduling of the programme), but I’m glad that he is still working, still talking about film, still writing about film (he has a column in the Radio Times).

However, I don’t know if I want to eat his pickled onions. Apparently, they are his family’s recipe passed down generations – who persuaded him that the world would not only want to eat them but would want to pay for the privilege? At least Newman sells salad dressing for charity – Barry just wants the money (although he doesn’t make very much). I’m not completely convinced it’s a real product – I think it works better as a surrealist joke – but it goes to show you the strange things that happen to people you used to watch on the telly when you were a young lad.

Comedy: According to Bex

My Favourite Television of 2010