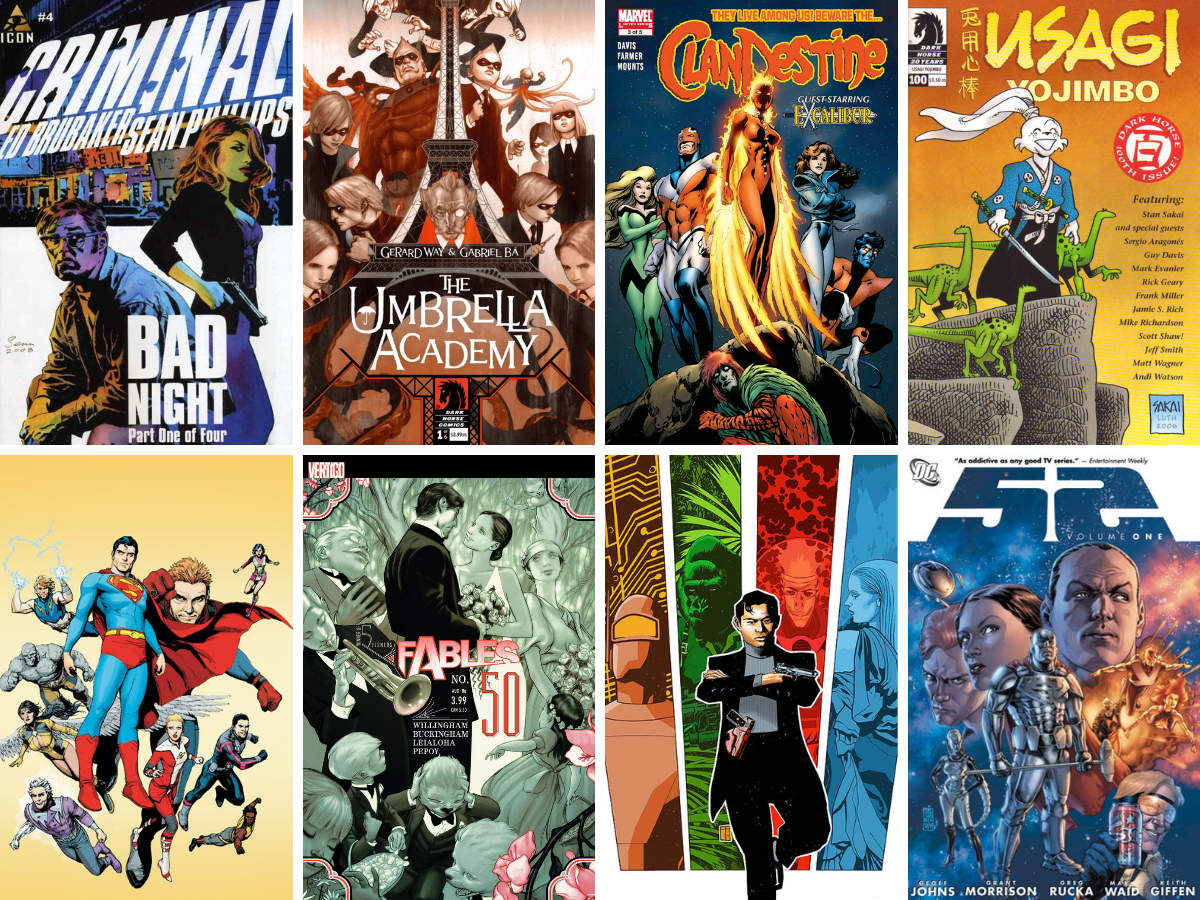 To reiterate the title of this post, this is a selection of the comic books I enjoyed this year that I also thought were very good. This is not a list that classifies for inclusion on any ‘Best of’ lists: I haven’t read nearly enough comic books to be able to even suggest which were the best of 2008, and I have no intention of doing so. These are MY favourites of books read this year. Here ends the disclaimer, and just in time for the end of the year.

Even though Scalped started in 2007, it was this year that I finally took the plunge and never looked back. The three trades collect some of the best comic books being published and I can’t recommend them highly enough to anybody who hasn’t tried them. [My reviews: TPB 1, TPB 2, TPB 3]

If you’ve been reading good comic books for the past few years, you know that Ed Brubaker has been writing some excellent books for a while now (Sleeper, Immortal Iron Fist, Daredevil, Captain America, Gotham Central). Criminal is the pinnacle of this because it is a pure distillation of Brubaker via his artistic partner-in-crime (if you’ll pardon the pun) Sean Phillips. Like Scorsese and De Niro, this is a team that works perfectly together: the second season of Criminal has been a masterclass in excellent comic books, with the three one-shots looking at background characters in the Criminal-verse, and the four-part story of Jacob Kurtz, the cartoonist behind Franz Kafka PI.

I’ll readily admit to being a huge fan of the work of Warren Ellis, to the extent of buying his genre-troubling comics at Avatar (Doktor Sleepless, Anna Mercury, Black Summer, No Hero) in the floppy format even though I know they will read better in the collected form. However, it was this black & white graphic novella (again from Avatar) that knocked my socks off this year. Starting out as an Ellis version of Sherlock Holmes in a steampunk setting, it completely turns itself on its head with the denouement. It is hugely entertaining to start with – Sax Raker is a wonderful version of Holmes and the storytelling is pure Ellis – and the art is insanely detailed and engaging without being distracting, working well without colour, without the wonderful ending. My favourite one-off story of the year [my review].

I finally succumbed to the overwhelmingly positive word of blog on this series and bought the trade; I have to admit that people were right – this is really enjoyable comics, a Grant Morrison-influenced superhero book, yet with wit, originality, flair and high entertainment value. Gerard Way has written a fantastic debut comic book series and Gabriel Ba provided an art style that is impeccably suited to the story. Fun, inventive, moving and worthy to be on the list [my review].

Because of the fact that it is so consistently good, Fables tends to get overlooked. Month in, month out, Bill Willingham continues to tell excellent stories based on characters from myth and stories exiled in Manhattan. This year saw the conclusion of the war with the Adversary and his empire, a story that people might have thought would be a satisfying conclusion to Fables, but it was only the start of another chapter of the series, with Willingham setting up new antagonists and a new angle for the intrigues in the Fables universe. Ably abetted by Mark Buckingham on pencils, and the excellent James Jean covers, this is an excellent series that I enjoy buying in the monthly format, something I’ve done since the very beginning.

Stan Sakai’s story of Miyamoto Usagi, a masterless samurai in 16th-century Japan, is an absolute masterpiece of the comic book world. However, because it is a black & white comic about a rabbit in a world of anthropomorphised animals, very few people read it; also, anybody interested in trying it out admits to feeling daunted by having to read so many trades (they are up to 22 now – the series has been going for 20 years) to catch up. The thing is that you don’t need to read everything to appreciate the skill and brilliance, but it will enhance your enjoyment. Meticulously researched, beautifully drawn, wonderfully rich and full of believable characters, this series mixes epics with detective stories and tales of Japanese folklore. There were only eight issues this year, but each one was great. Definitely worthy of being on the list.

This is a chronological cheat but I only read the series this year, so it’s a 2008 book for me. The four collections of the series are the first books I got from the library where reading them made me want to buy the books for myself [my review]. This immense story is an amazing achievement in its own right: a weekly comic book containing multiple lead characters, interconnecting plots, four writers and the wealth of the DC universe in an absorbing story that rewards re-reading. It is incredible that they were able to complete this mammoth undertaking, let alone make it an enjoyable read. I’m not sure what it was like as a weekly story, but the trades make for a fascinating look at the DC universe from a different perspective, and the trades also contain some commentary from the main players for an added bonus.

8. Superman & the Legion of Super-Heroes

I never thought I would have a story written by Geoff Johns on any kind of list of good things. It’s a complete surprise to me to see it here, and I wrote this thing. I’ve not enjoyed a lot of things that Johns has written, but this bringing of the LSH into the current world of Superman – and making them work wonderfully – is a delight [my review]. The story is enjoyable as well has having a thematic connection to Superman as a character and the LSH are re-energised for an audience who don’t read the convoluted continuity of long-running and constantly updated LSH. With Gary Frank’s clear, strong artwork imbuing the characters with the nobility they deserve, this story was a delight from start to finish and I had to re-read it almost as soon as I finished.

This is my list of personal favourites of comic books read in 2008, so this means I can include a series that was published in 2006–2007 and collected in 2007. I read this earlier this year and it was a very enjoyable read, made even more impressive by the excellence of the packaging – I got my hands on the hardback collection [my review], which is crammed with bonus goodies, including reprints of early stories of the original stars, as well as other bits and pieces. The new comics, by Jeff Parker and Leonard Kirk, take old characters from Marvel history and do something interesting and new with them, rather than doing the same old thing, and it’s great to see they are finally getting an ongoing series coming out of the Dark Reign crossover.

This is my blog so I’m allowed to include something on my personal favourites JUST BECAUSE IT ACTUALLY EXISTS. The sheer fact that these five comics came out this year is reason enough; ClanDestine is an oddity in the world of company-wide crossovers and established characters ruling the world of superhero comics. It is a throwback to a more innocent age yet it is no less engaging, no less entertaining, no less enjoyable for it. It won’t end up on any ‘Best Of …’ lists – and, to be completely truthful, it wasn’t the best ClanDestine – but the beautiful art and charming story of the Destines needs to noted as a Good Thing, especially when nobody else read it.

Still without books, so here are some links