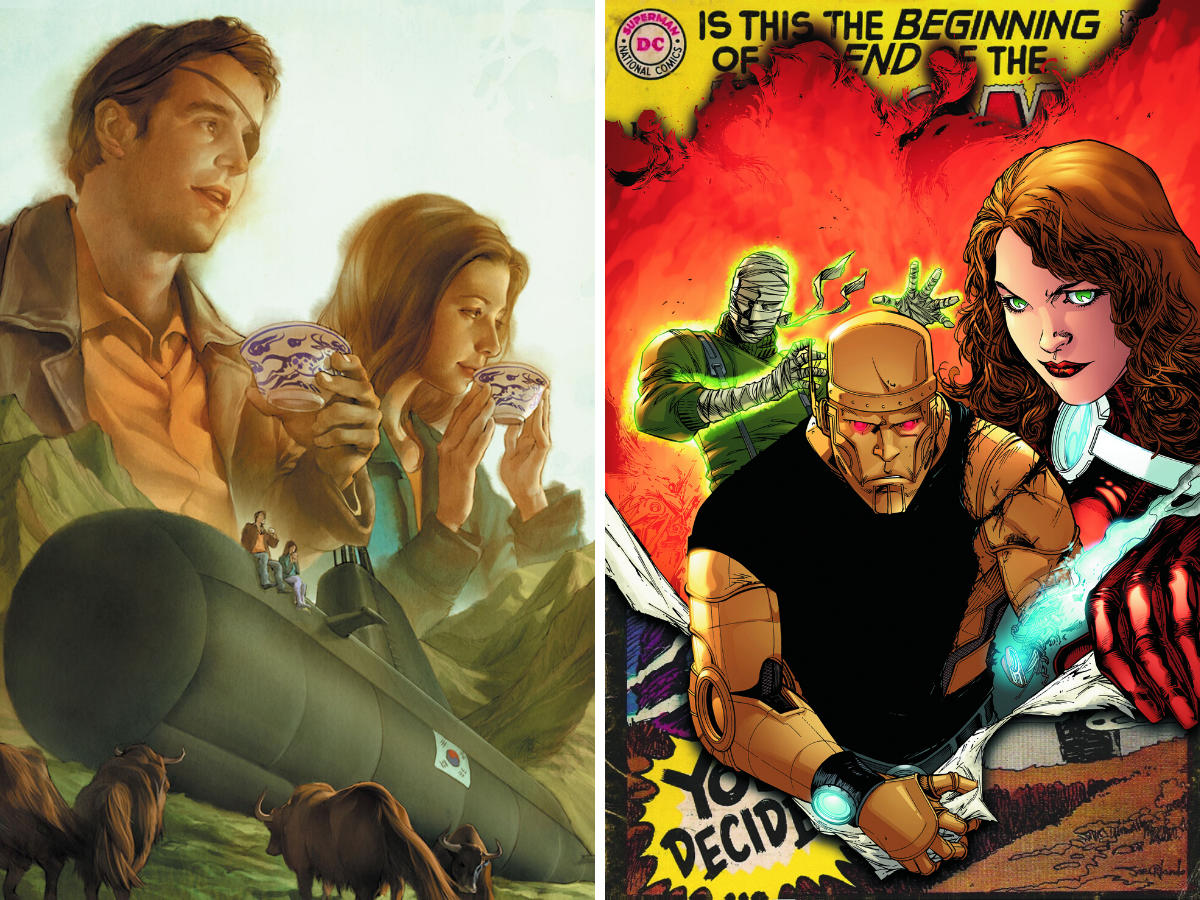 Lots of catching up to do with my weekly comic book purchases, and the week I’m talking about today was one where I bought a lot of comic books, so let’s get on with my thoughts.

Astro City: Dark Age Book 3 #4
Wow, this is taking too long. The delays haven’t helped but this story keeps on going and going and going. And the Royal brothers still don’t get to exact their revenge. And I don’t get all the references to Marvel comics in the 1970s that are being filtered through these stories. Even rereading this, I wasn’t drawn back into the story; I feel detached from the events occurring. I still don’t like Brent Anderson’s art anymore. I’m so demanding, aren’t I?

The Boys #33
I enjoy The Boys, even if occasionally it seems like Garth Ennis is just being a little vindictive to superheroes. There is a purpose to it all – this is Ennis we’re talking about – but it sometimes doesn’t feel it in the single issues. John McCrea still doesn’t feel like he’s the right artist for The Boys, even though his work on Hitman would suggest he’s perfect; maybe Darick Robertson has stamped his identity on the series too much, so nobody can create the same atmosphere for the mix of superheroes, satire, the serious stuff and characterisation.

Buffy the Vampire Slayer #27
When did Buffy become boring? How can a series about vampire slayers and werewolves and magic be so dull? And the decision they’ve taken is too remove the magic? I was so happy to see a comic book series of new, Joss Whedon-directed, in-continuity Buffy stories; the early stuff was great. What happened? Is it the difficulty of doing a television series in long-form comics? Or is it the writers not 100% comfortable in comic books? Whatever it is, I’m losing the enthusiasm for the book I once had. I’m still in it for this season, but I won’t be buying the individual books when the recently announced Season 9 hits our stores in the future.

Doom Patrol #1
Reasons I bought this comic: I like Keith Giffen’s writing; I want to support the idea of value for money (in the idea of Second Feature, eight pages of extra story for the extra dollar); I want to see the JLI team back together (Giffen, DeMatteis and Maguire). I’m not particularly into Doom Patrol (apart from the Grant Morrison run, obviously) or the Metal Men, but I can be persuaded to care about them by good storytelling. In that respect, Giffen does some new things with Doom Patrol, experimenting with techniques to reveal plot and backstory in different ways. It’s not a straightforward first issue – it never is with Giffen – but there’s something to the story and the characters that makes me want to come back for more. Matt Clark does a good job on art – I don’t know if Giffen wrote it that way, but he sticks to a grid structure for the most part, and he is able to cope with all the Giffen chat and the action scenes. In the Second Feature, the magic is back: the JLI team weaves some comedy superhero thrills out of the Metal Men. A silly story, lots of dialogue, beautiful and expressive art, a new running joke (nobody knows anything about Copper, the new robot in the team) – it’s all wonderful stuff and makes you wonder why it isn’t a full-length story.

Frankenstein’s Tomb
Warren Ellis writes another one of his unusual but interesting ‘graphic novellas’ for Avatar. This time, it is the story of Mary Shelley meeting her creation, the monster, in Castle Frankenstein (which is actually a real place – I never knew), where he explains some aspects of the future to her in relation to the book she will write. Even though it may seem more like an illustrated essay of Ellis’ thoughts on the research he has done on Shelley and her famous novel, it comes together to be more than just that – it becomes a meditation on the act of creation itself from the point of view of the writer (but also could be applied to other artists). Fittingly, the art is in black and white by Marek Oleksicki – I liked it, with a clear and sharp line and plenty of moody atmospheric backgrounds. Is there anyone else who is doing such variety in their creative output as Ellis? I don’t think so, I’m glad that he is.

Irredeemable TPB #1
Even though I like Mark Waid’s writing and the idea (essentially, ‘What if Superman turned evil?’), I didn’t want to try a $3.99 series based on a few positives – I am a nervous chap like that. However, Boom Studios decided very sensibly to bring out a cheap trade paperback (four issues for $10, equivalent to £7), as well as issue 5 for less than a dollar. I didn’t go for the single issue – once I start a series in trades, I stick with the trades – but I did pick up the first trade. And I’m glad I did – this is a very interesting and enjoyable examination of the premise in a universe where characters can be killed. Which is something that happens in the first few pages. The Superman analogue here is The Plutonian, who is killing his superhero friends and has destroyed Sky City. Some heroes have survived and are trying to discover all information on The Plutonian to find a way to stop him. It is extremely frightening to see Superman turn evil – the power, the intellect, the devastation – but Waid also examines why this could have happened. We see the Lois Lane analogue turning from him when she finds out that The Plutonian, who is her boyfriend, announces to her that he is also her work colleague Dan Hartigan. We see The Plutonian destroying Singapore after the UN representatives were pledging themselves to him, and giving the hero Mr Qubit the choice to save ten people out of millions because ‘That’s what it feels like.’ Chilling stuff. I don’t have much to say about the art (I rarely do) but Peter Krause does a good job – he reminds me of Brent Anderson a little, before his work went a little downhill for my tastes, which adds to an Astro City feel already evident in the analogue approach to the story. I’d prefer to see cover artist John Cassaday do the interiors, but that could be said about a lot of books, but Krause is a good artist, a good storyteller, and I’m not distracted from the story by his style. I’ll definitely pick up the next trade to see how the story continues.

Reading Lots Of Books From A Library