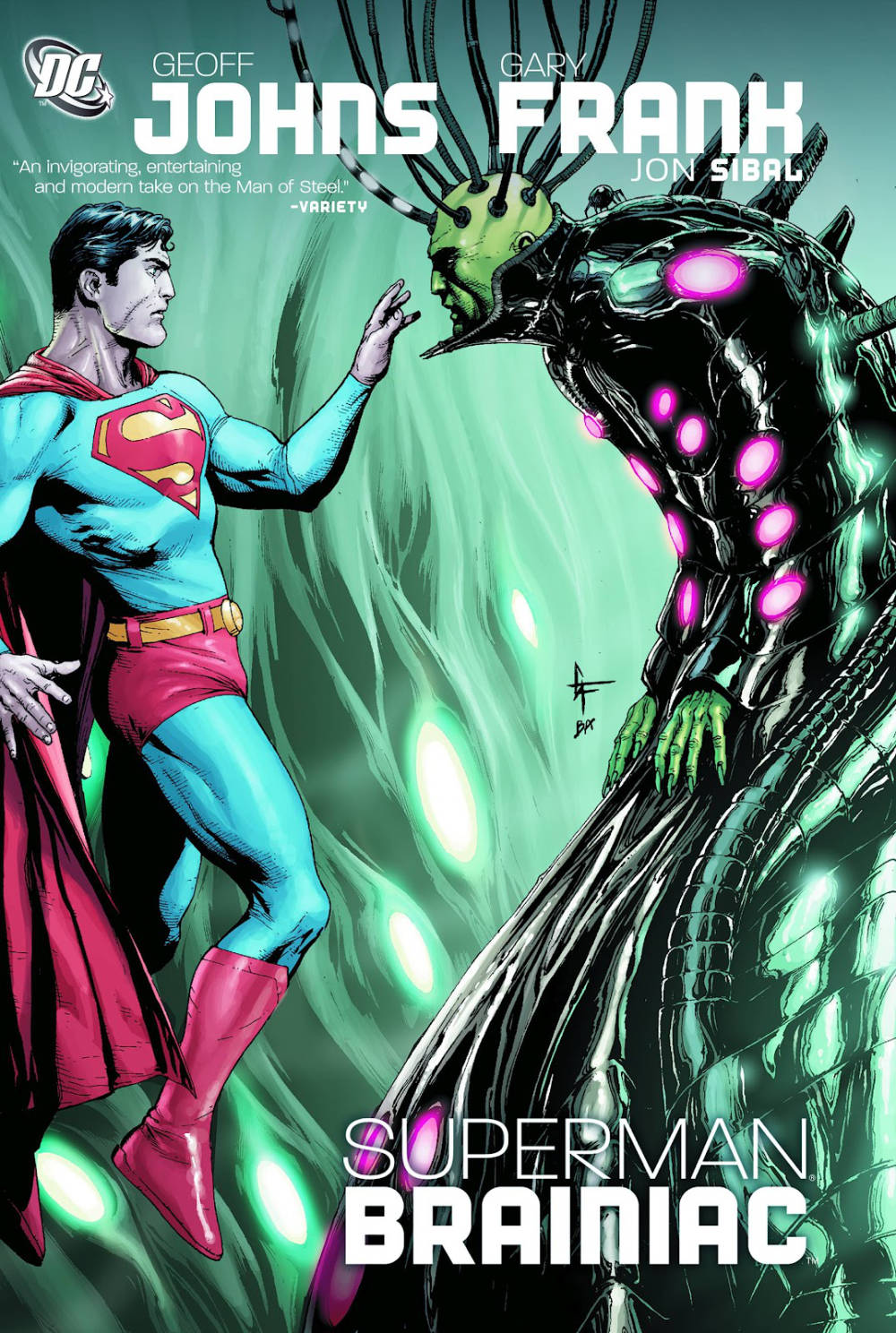 I really enjoyed the previous storyline (Superman and the Legion of Super-Heroes) by the same creative team, so I had to give this a try. It’s a very enjoyable story, although not as good as the LSH arc. As the title of the book suggests, it’s Superman meeting Brainiac – the real Brainiac (suggesting that all previous stories with Brainiac were not so real, something of a slur to previous writers). I’m not a Superman fan so I’m not affected by the portrayal of Brainiac, but it seems a little presumptuous of Johns to say his is the definitive version. This story says that Brainiac is a long-lived, super-intelligent and powerful destroyer of worlds, going round the universe collecting samples of a culture (such as the bottle city of Kandor) and absorbing the collective knowledge and attributes of the civilisation, before destroying it. He has been dormant while sending out probes looking for the last Kryptonian – Superman. And now he’s found him …

Before the action starts, there is some character stuff as time is devoted to life at The Daily Planet. There is some good comedy here (Clark not looking at Cat’s enhanced cleavage), which is sold by Frank’s art, channelling the spirit of Christopher Reeve in some panels – the hunched body stance, the smile on Clark’s face, the look of concern, the subtle physical change when he becomes Superman). Johns is a good plotter with a strong sense of what he wants, but there are times when his dialogue is so ‘on the nose’ it’s rather painful – people don’t express their feelings so bluntly and clearly in real life, and Johns has forgotten that he’s supposed to show, not tell. Frank does the better job – he draws great action, but he’s great with characterisation and people; even though he likes to draw beautiful women, he has the excuse with Cat but he draws Supergirl as an ordinary teenage girl (no sluttiness here, unlike other cheaper artists).

The only trouble I have with the story is that Johns spends a lot of time building the threat of Brainiac, but then Superman is able to beat him with relative ease (after setbacks) and keep him down afterwards. It seems imbalanced, as if he was trying to rush through the story to get to the emotional heart: the death of Pa Kent from a heart attack. You can tell this is going to happen from the father/son exchange in the middle of the book (if you saw it in a film, the audience would be shouting out ‘He’s going to die’), and it feels slight and impermanent. Maybe it’s just me, a comic book cynic of old, but it didn’t feel as powerful as they wanted it to be.