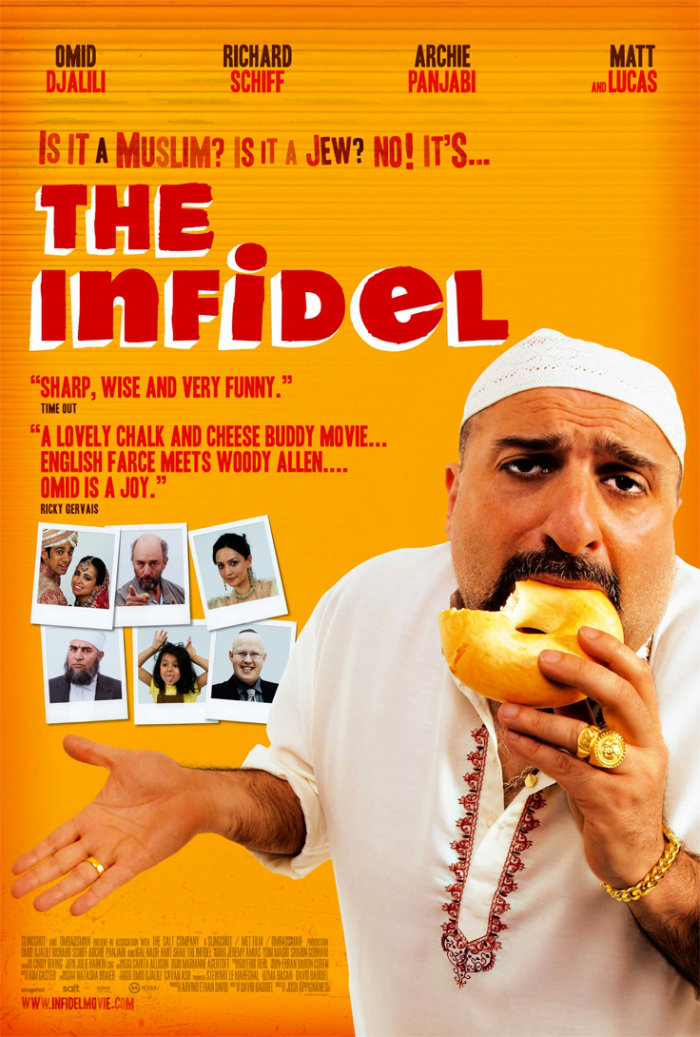 I had hoped to see this film when it came out in the cinema, but timings and cinema availability were against me, so I was glad to finally catch up with it on DVD, which is where it is more at home than the big screen. David Baddiel, a comedian and writer for whom I have a certain fondness since his time on The Mary Whitehouse Experience and Newman And Baddiel In Pieces (I think I’ve even bought one of his books, and actually read it), has written a funny British film that is about something and also based on personal experience. Baddiel, a Jew who was confused as Pakistani when he was a teenager at school as well as later due to his skin tone, has taken this idea and used it as a starting point for a comedy about a hot topic – the nature of Judaism and Islam today.

The story is about Mahmud (Omid Djalili), a contented albeit not a particularly observant Muslim with a loving wife and two children who discovers that he was adopted and was actually born Jewish: his birth name was Solly Shimshillewitz (‘Why didn’t they just call you “Jewe-jew-jew-jew-jew” and be done with it?’). This obviously causes him some anxiety, and he has to learn how to be ‘more Jewish’ so that he can visit his birth father in a Jewish care home. He does this with the help of the angry taxi driver, Lenny (Richard Schiff), who lives across from where his mum lived and is the only Jewish person he knows. These sections are the funniest – Djalili and Schiff play off each other really well, and Baddiel writes some very funny scenes about being Jewish, such as learning to say ‘Oy’ properly (‘And now onto “vey”.’) and telling a funny story at a Bar Mitzvah (where the punchline is a nonsense collection of Yiddish words, based on a story Baddiel used to tell in one of his routines).

The drama of the story involves Mahmud’s son getting married to a girl whose new step-father is an observant and known imam, so the family must prove they are very observant to appease the step-father, which leads to the inciting incident of Mahmud telling everyone he is Jewish to get out of being arrested for inciting religious hatred. Therefore, the end of the film is about Mahmud winning back his family and helping his son get married, which involves the most silly (and not in a good way) reason for everything to work out that I think I have ever seen in a film, particularly a film about a Muslim finding out he was born Jewish. It really doesn’t fit and takes away from the enjoyment of the rest of the film, which is gently funny and enjoyable.

Omid Djalili is very good in the lead role – a fat and hairy man with a wife who is too attractive for him but who exudes warmth and humour, even when he is being an idiot. Schiff is also very good as the main supporting character, reeling off his dialogue with supreme ease (probably a walk in the park after The West Wing). There is also able support from a host of British comedians (Matt Lucas, Miranda Hart, Paul Kaye, David Schneider), and even a blink-and-you’ll-miss-it cameo from Baddiel himself. It is not a subversive film or highly political (although it does make some political points), but it is an amusing little British film with a point.

Notes On A Film – GI Joe: The Rise Of Cobra

Notes On A Film: Daybreakers

My Ten Favourite Films Seen In The Cinema 2010