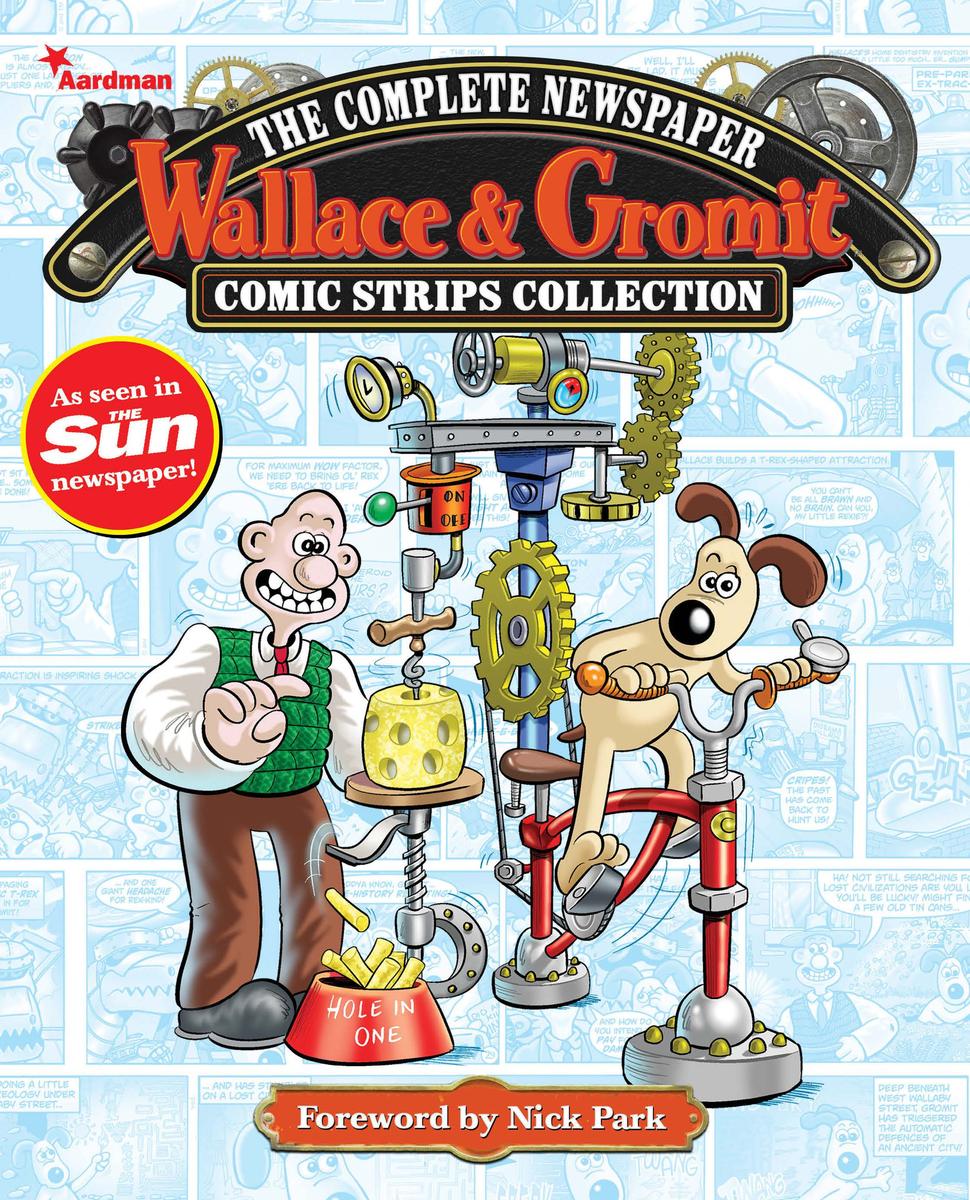 Fact: everyone loves Wallace and Gromit [citation needed], especially if you’re British. This includes me. The charm, the inventiveness, the attention to detail, the quirkiness, the humour, the Britishness – the short films and the full-length feature are joyous and amazing pieces of entertainment. Wallace & Gromit: The Curse Of The Were-Rabbit has one of the greatest sight gags in cinema history: when Wallace ends up naked at the end of the film, Gromit covers up his nakedness with a large cardboard box on which is written ‘May Contain Nuts’ that happens to end up in the region of Wallace’s groin area …

The demand for Wallace and Gromit material means that the comic book format is a natural result. The humour, the silly inventions, the facial expressions of Gromit, the background jokes (such as the titles of Gromit’s reading material), the puns and the general silliness are a perfect mix for the cartoon strip. There was previously a monthly comic book by Titan Magazines, but this collection is the first year of the daily comic strip that ran in The Sun – the format is that of a full-colour, three-panel strip per day forming a complete story in six days, i.e. Monday to Saturday. The art style is cartoony and colourful, and wouldn’t feel out of place in The Beano or The Dandy – clear and simple lines, expressive faces full of the trademark big teeth, and easy to read storytelling.

Reading this, I couldn’t quite work out who this was for. Wallace & Gromit is family-orientated and the colourful art suggests a younger audience, but some of the puns are not for all ages. For example, feta-compli (I’m not suggesting that everyone doesn’t know that it’s a play on fait accompli – a thing that has already happened – from the French for ‘accomplished fact’, but I don’t think it’s common knowledge) indicate otherwise – is the Lynne Truss grammar book, Eat Shoots And Leaves, such an easy reference? The punning is impressive in its amount and inventiveness, referencing previous Wallace & Gromit films (The Wrong Schnauzers), songs (‘pre-history repeating’), desperate stretches (‘We’ll retrieve-r those pooches’), an avalanche of pasta puns in the story called Spaghetti Incident (pastapocalypse, ‘Penne is mightier than the sword’, fusilli sweaters), and an unending wave of cheese puns – a Red Leicester day (for red letter day), sweet dreams are made of cheese, a cheese shop called Brie Encounter.

There are nice little touches, such as returns for Feathers McGraw (from The Wrong Trousers) and the rocket from A Grand Day Out (in a story called Another Grand Day Out), and the inclusion of background gags, such as Gromit reading Paws on the beach, the complete works of George St. Barnard Shaw and William Shakespaw, and films such as Sit’n’stay Kane. However, for the most part, the stories seem a little lacking in ingenuity: they mostly seem to work on the principle of puns first, story second. Some don’t even bother with story: there are three-panel bits called ‘Funnies’ and there is even a story – 12 6 Days of Christmas – that is just puns, no story at all.

There is an explanation for this. The afterword takes the time to ‘credit the unsung heroes’ of the strip – all the strips were put together by a ‘Titan Think Tank’ of ten writers and six artists and three editors. While the writers room might work for television, it loses something in translation for the cartoon strip. There is no individuality, no spark, no sense of a creative head driving the process. There is inventiveness to some of the punning but there’s nothing unique or charming about this, especially in comparison with the source material. These cartoons take the basic background elements – gadgets, cheese, puns – and puts them as the focus, which misses the point. I’m sure that this will make a nice present for a Wallace & Gromit fan, but I can’t see it being re-read very often.

From A Library: Batman and The Mad Monk