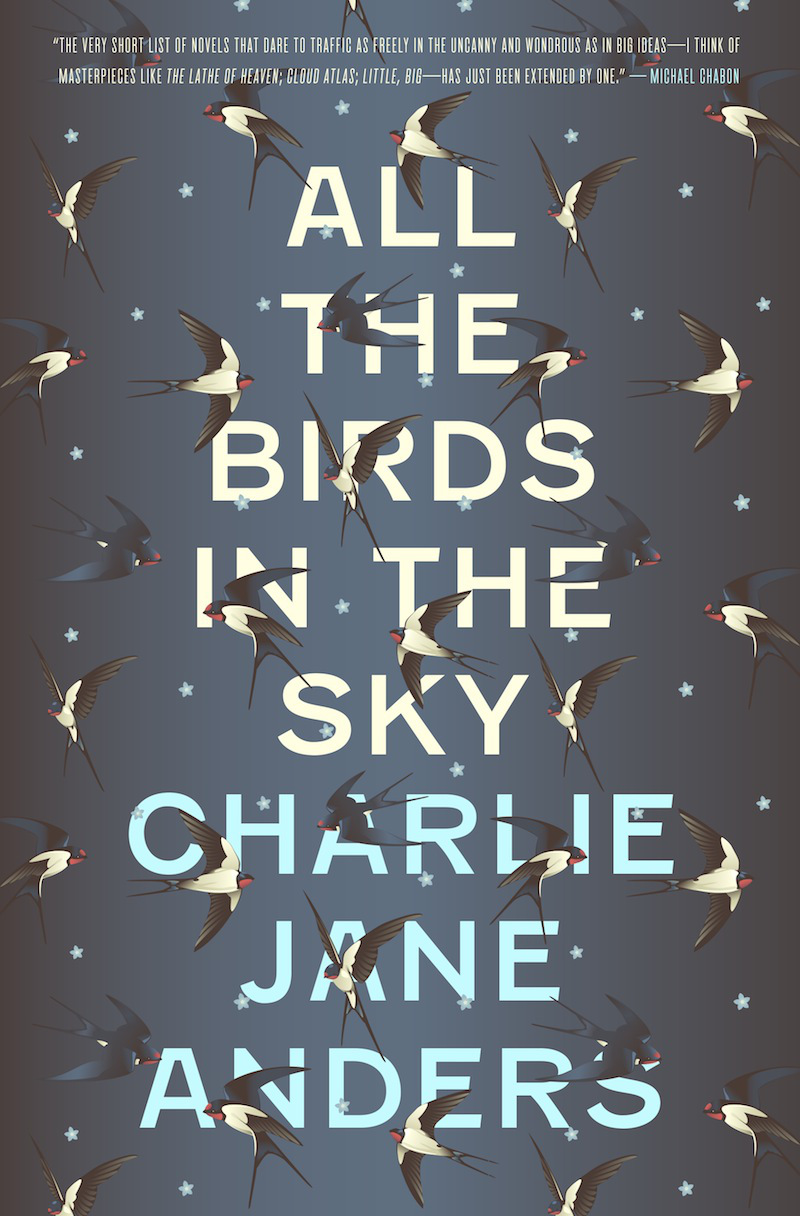 All The Birds In The Sky
Written by Charlie Jane Anders

The near future. Patricia is 6 years old when she helps a sparrow with a wounded wing, who tells her to take her to the Parliament of Birds in the nearby forest to fix him. The sparrow tells her she’s a witch, if she can talk to animals. Laurence (definitely not Larry) is a smart 6-year-old kid who doesn’t like doing stuff that Gets Him Out Of The House, who makes a Two-Second Time Machine from schematics he finds on the internet. He decides to go to Boston to watch the launch of a prototype rocket, which he doesn’t see but he does meet all the engineers who made it because of the Two-Second Time Machine he made.

Seven years later, these two literally bump into each other in the playground at school, Patricia breaking Laurence’s time machine. Despite this, they become friends (Patricia uses his full name without being asked) and Patricia acts as Laurence’s alibi for outdoors stuff so he doesn’t have to do it. They are not boyfriend and girlfriend, even though everyone at school thinks so, and Patricia rediscovers some of her witch power (after eating lots of spicy food as a protest) when she talks to the Tree in the area where she met the Parliament of Birds, while Laurence builds a supercomputer in his bedroom. Things become complicated for them when Theodolphus Rose, a member of the Nameless Order of Assassins, has a vision of the future at the Assassin Shrine in Albania, which will lead to death and chaos and a war between magic and science, at the centre of which are a man and a woman who are children in the present and Mr Rose decides he must kill them, even if his Order has a strict ban on killing minors …

In the third section, Patricia and Laurence meet again when they are 23 and living in San Francisco – Patricia has been to witch school (Eltisley Maze) and Laurence is a Wunderkind working for the rich entrepreneur who paid for the rocket Laurence went to see as a child. The world is in trouble – catastrophes in Seoul and Haiti, the Great Midwestern Dustbath, the French blight, Atlantic superstorms, Arabic winters, the last of the bees in North America – but technology advances as usual, with most of those in the developed world owning a Caddy, the next-generation handheld device that is almost like a life aid. Once again, things become complicated when Patricia and Laurence become part of each other’s lives, only this time there is even more at stake …

This is a wonderful novel by Anders, and it’s even more impressive because it’s her debut novel. It feels strange that this is her first novel because I’ve been reading her incisive and passionate writing for ages at io9.com – she’s the editor-in-chief of the site and has written many, many articles for it, and her analysis and thoughts on science fiction, writing and Doctor Who are a regular part of my daily reading. It also explains the liberal use of Doctor Who quotes and sci-fi references to The Matrix, Star Wars, Avatar, Red Dwarf and the ‘Shatner Space Telescope’, something I enjoyed immensely. It also explains her understanding of story and the ability to blend science fiction and fantasy to produce something new – the two genres are connected but not always mixed in such a blatant yet lyrical fashion, so it was a joy to become immersed in a book that handles the combination so well.

The prose is clean and sharp, neither the dryness of hard sci-fi nor the ethereal quality of fantasy, and is leavened liberally with humour without distracting from the story. Anders has a lovely turn of phrase: a kitten talking to Patricia describes birds as ‘like toys with meat inside’, and I particularly liked the sentence, ‘When Laurence was old enough to do what he liked, he would be old enough to understand he couldn’t do what he liked.’ Anders demonstrates her understanding of plot, theme, story, character in her articles, so it’s no surprise she does the same with her novel, which blends all the elements and brings together all aspects at the end (this book seems to an entity to itself, not the first in a series, which made the narrative resonate more).

Most of all, Anders has created two lead characters the reader can believe in. Through her writing, I connected with Patricia and Laurence, felt for them and their difficulties, developing towards a level where, if the story didn’t end well for them, I would have been forced to hunt Anders down and make her change the ending. Fortunately, Anders didn’t have to obtain a restraining order – her lyrical, charming, inventive, delightful story hit all the right notes and satisfied my demands for a deserved conclusion for Patricia and Laurence.