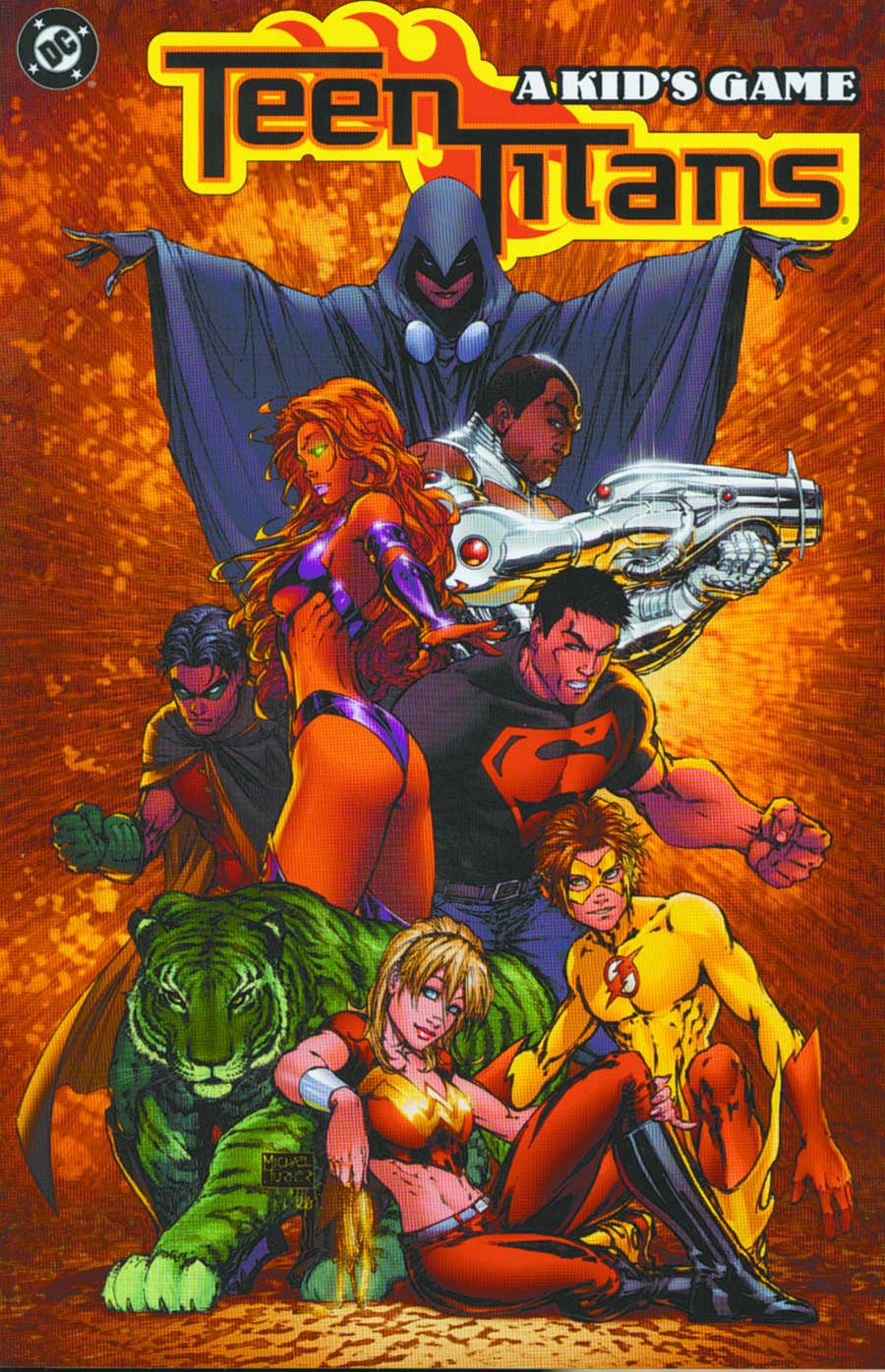 Before I start, I just wanted to make a point of mentioning the Turner cover above: it’s so depressing to have the butt shot of Starfire, along with her unfathomable breasts, yet still being able to see her ribs poking out. Turner needs help. He has a problem. (Although he draws a good tiger.)

I didn’t read the Titans growing up. I have the crossover with the X-Men because I was a geek for the muties, and that’s it. I might have seen some of the stuff, but it didn’t cross my radar. I thought I’d give this a try. It looks like I don’t need to read the old books, because Johns obviously just wants to tell the same stories again, but with some new characters.

I’ve not read much Johns because he seems to be a DC fanboy and I am not. His writing is competent and he gives the people what they want: the same superhero comics, but slightly different, but not too different so they might complain that it isn’t the same as it used to be. This version is basically the same Teen Titans as Wolfman and Perez, but with updating to the new permutations of the heroes (Robin for Nightwing, Impulse for Kid Flash). So, it appears modern and fresh, but it feels like the old stuff, giving the fanboys more of the same.

McKone’s art is just the job for this sort of book; he’s a good, solid superhero artist, drawing good muscles and actions and poses, dynamic camera angles and moving the story along, even if his faces have a certain oddness to them that I can’t put my finger on but feels a little disconcerting at time. Most importantly, he draws the Teen Titans as teens, i.e. they look younger than the adult superheroes. You’d be surprised how many artists don’t get that.

The story is nothing wildly original. This is a gathering of the team for no other reason than DC wants a Teen Titans book on the market. Under the auspices of Cyborg, teenage superheroes are given a weekend training camp, something the adults don’t want, because adults are mean and horrible to da kidz, yo. There is a lot of talking, but then they are given a reason to fight by the timely arrival of Deathstroke, who kneecaps Impulse. This is a tad jarring; the tone strived for is enjoyable, light superheroics, so seeing a close-up of someone’s patella being blown off by a shotgun is incongruous. This leads to a visit to the Titan memorial, which is really rather creepy, with lifelike statues of the poor bastards who’ve died while in the Titans. That’s pretty morbid, dude.

The adults still don’t understand, so we get a throwdown with the JLA, which seems a little over the top, but what do I know? Impulse has now decided to become Kid Flash because Johns wants a Kid Flash on the team, and gives him the power to remember everything he reads, which arrives with no prior warning. Wonder what Waid has to say about that? It’s all part of Johns getting things his way, back to the old group, by having Jericho still alive within his father, Deathstroke, and having Raven resurrected so that she can be the deus ex machina for the Jericho fight. Ho-hum.

The final issue was the straw that broke the camel’s back regarding accessibility. If you don’t have a PhD in Titan-lore, you would have no idea what is going on. But it is made worse by the introduction of Krypto, the canine from Krypton. Dear God, what the hell is going on? Why? No offence to Krypto lovers but it is a stupid idea that only works in Silver Age and Alan Moore’s Supreme. Otherwise, it’s just plain embarrassing, as I’m sure the da hip kidz could tell him.