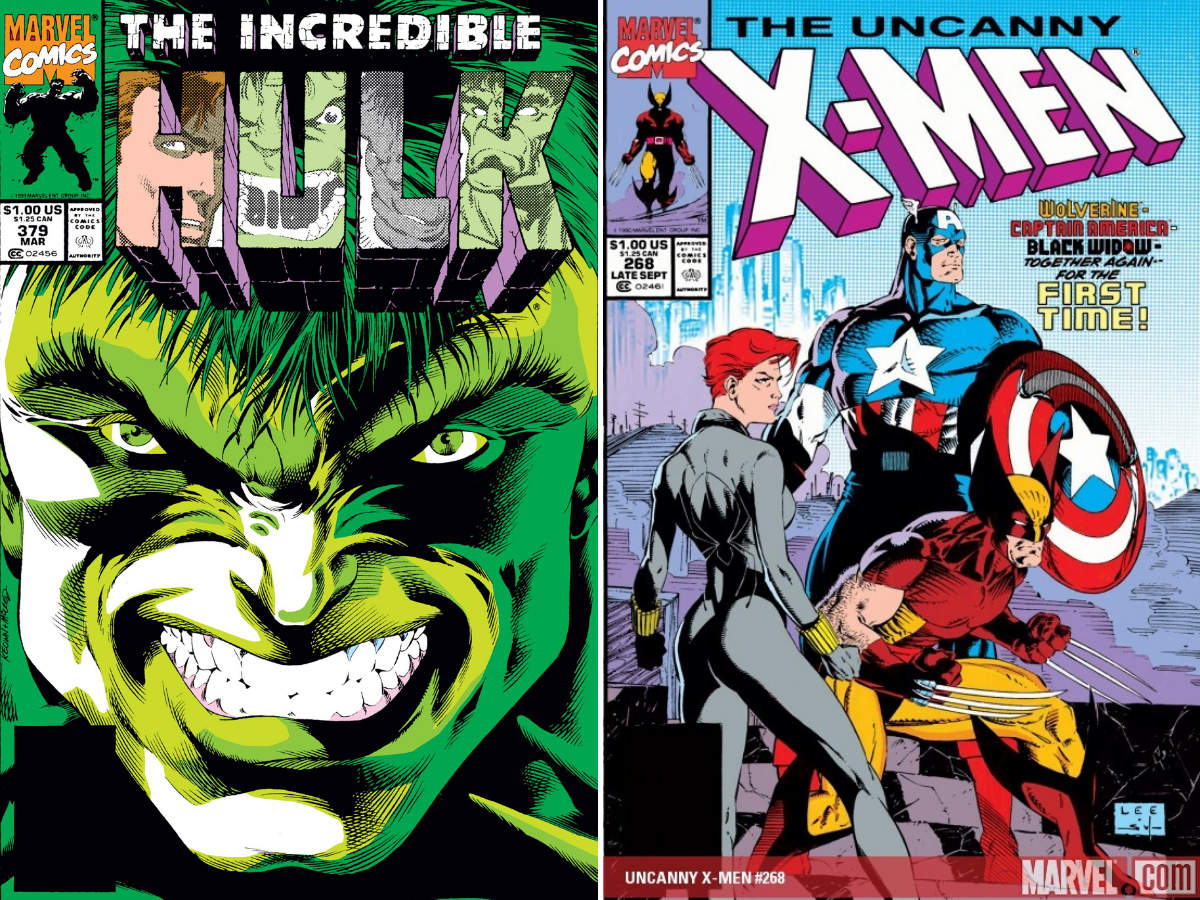 Following from the previous post, this is the second part in my list of artists I dig but who are just outside my Top 5 (in continuing alphabetical order):

Dale Keown
Peter David had a great run on The Incredible Hulk; not completely perfect by any means, but pretty damned good, it has to be said. It was made even better with artists who had a little something extra. Keown was such an artist for me, and his run on the Hulk came at the zenith of PAD’s run on the Hulk, leading up to the unification of the three personas. Keown could take it to extremes, but in a cartoony and appropriate manner, but he was also very good at drawing expressions in the talky parts, with an almost Maguire-esque ability with faces in comedy. I used to love the way his characters would have drool between their teeth when shouting; I’m weird like that. Even though he had a basis that could almost qualify as a Byrne clone, he bought an extra edge and freshness to his art that Byrne lost a long time ago. I even bought PITT, his creator-owned series from Image, which goes to show the impact he had. Shame he went off to try and become a rock star.

Jim Lee
When Lee did his first work on The Uncanny X-Men, I was wowed. It was just so cool. And I wanted more. Fortunately, I got more, although not enough as he went to start Image and do his own thing. I didn’t buy WildCATS (although I have a few issues dotted here and there) because I had heard that Claremont had been removed from the X-Men because the editors had wanted the superstar artists in charge, and I felt some loyalty to Claremont over Lee, even though I thought he was an almost perfect superhero artist. His mix of beautiful people, hard bodies, poses and movement were so appropriate for the time and place that I always associate him with the X-Men. I still like his art, even though it won’t buy just because it exists; I did buy his own series, Divine Right, while he was writing it (which was surprisingly good, in my opinion), which goes to show my affiliation for his work.

Kevin Maguire
I don’t know if Maguire feels stereotyped as the ‘Funny Superheroes’ artist, but his work is the best mix of superhero action and the exquisite detail of facial reactions required for good comedy that I have yet seen. Would the Giffen–DeMatteis run on Justice League been as funny without his art? I don’t think it would, as his fantastic art worked perfectly with the mood. I remember getting the Captain America year one series that he did with Fabian Nicieza, just because of his art, even though I really don’t get Captain America, and thinking he could do the serious stuff as well. This was born out with the emotional weight of the most recent sequel to the Bwa-Ha-Ha days, in the Guy/Bea/Tora scene. I even bought Strikeback and Trinity Angels, such is my admiration for his art. I’ve yet to get The Defenders, but I can’t wait.

Carlos Pacheco
The clean, dynamic art of a European who loves superheroes has always been a joy to behold. It was probably Warren Ellis’s Starjammers that first caught my eye, but with art that splendid, it wasn’t difficult. There is a lean, detailed, muscular beauty to his work, with the highlights (for me) of Avengers Forever and Arrowsmith. I’m not a big Jeph Loeb or Geoff Johns fan, so I haven’t got a lot of his recent stuff (and the reason why I stopped buying his run on the Fantastic Four as well), but Pacheco on art is a guarantee of gorgeous work.

Jason Pearson
The funky, angular, cartoony stylings of Pearson first caught my attention in the Giffen ‘Five Years Later’ Legion of Super-Heroes. It could have been just the change after the moody Giffen art, but it was also because it has a fresh energy of its own, fizzling with movement and an edge. The most easily enjoyable work was the John Woo-inspired Savage Dragon story, Blood and Guts, but it’s Body Bags that is the closest to Pearson’s heart and home, with a bleakly funny take on a bounty hunter and his sassy daughter. I was very happy that Jason brought that back to us; it was more comfortable buying that than the Penthouse Comix he did (even though the story he did was incredibly sexy, I must confess).

Leinil Yu
Another artist I discovered via a Warren Ellis-written story, this time Wolverine, where Yu’s classic yet modern style just oozed off the pages and smothered my eyes in their gorgeousness. Despite not liking Scott Lobdell’s writing, I still bought High Roads because of Yu’s sleak, snazzy visuals. His line has a very unique feel to it, with some nice touches and strong storytelling element. His Superman: Birthright was a very modern interpretation of Supes that I enjoyed, and I’m debating whether to get Silent Dragon, based on so-so reviews on the blogosphere. I might even pick up the trade of the Ultimate Hulk/Wolverine thing, just because of his sterling work.

That’s the list of pencil jockeys who float my boat, but don’t qualify for the David Top 5 favourite artists, coming soon.