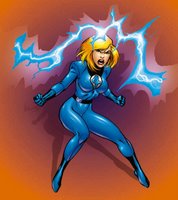 Susan Richards, nee Storm, is a mother of two, Franklin and Valeria, wife to noted scientist Reed Richards, and a founding member of the Fantastic Four. She has the ability to turn invisible, as well as project invisible force fields. With Reed, Johnny and Ben, she has saved the world and the universe countless times.

What is your idea of perfect happiness?
My family. And no imminent threat of death.

What is your greatest fear?
Being useless.

Which living person do you most admire and why?
My husband, Reed Richards, who constantly proves he deserves his code name, as a husband, father and friend.

What is the trait you most deplore in yourself?
Malice.

What is the trait you most deplore in others?
Hating children.

What has been your most embarrassing moment?
See the answer to question 4.

What vehicles do you own?
Fantasticar (my name is on the registration for tax purposes).

What is your greatest extravagance?
A skyscraper in the middle of Manhattan.

What is your most treasured possession?
My children.

What do you most dislike about your appearance?
I’m not bragging by saying ‘nothing’; you have to believe you look good to go running around in spandex. I work out to keep in shape, especially after giving birth, so I’m proud. Anyway, I’ve always got the invisibility as a back-up.

Who would play you in a movie of your life?
NOT Jessica Alba.

What is your most unappealing habit?
Berating my younger brother, Johnny, even when he deserves it.

What is your favourite smell?
My invisible force fields.

What is your fancy dress costume of choice?
When you can turn invisilbe, fancy dress really isn’t worth it.

To whom would you most like to say sorry and why?
Namor, for stringing him along all this time.

What or who is the greatest love of your life?
Reed is my centre, my rock, my light.

Which living person do you most despise and why?
Victor von Doom, because he is the anti-Reed, and it’s such a shame.

Have you ever said ‘I love you’ without meaning it?
Never. And anything Namor says is a lie.

When did you last cry, and why?
I cry all the time; male writers only know one emotion for women, and it involves tears.

What keeps you awake at night?
The sound of Reed’s involuntary stretching; it’s exactly like in the cartoon and I’m still not used to it in the middle of the night.

How would you like to be remembered?
As a good wife and mother.

What is the most important lesson life has taught you?
Appearances can be deceiving.

Comics: My ridiculously late 100 Things I Love About Comics