Wow, work just came out of nowhere and bit me in the arse. Bastard. How am I supposed to blog if I have to earn a living? So, first some linkblogging, then some thoughts on artists.

Scott at Polite Dissent is back [EDIT: not completely]. Seems there was a problem with his hosting service, which has been sorted. Good news.

Tom presents a very well-reasoned look at the two-faced nature of Joe Quesada when it comes to Spider-Man [EDIT: post has been removed]. Makes a lot of sense to me, especially as Joey Q will let JMS and Kevin Smith do whatever they want and then turn around and say that Peter Parker being married doesn’t work. There are no bad ideas, just bad writers, Joe.

Comic Book Galaxy are having a giveaway [EDIT: dead link] – you should all be made aware of this.

Happy Birthday to Mark, who has gone a bit senile in his old age, because he is giving away presents instead of receiving them. You can find out more here.

For my information, Shane is back blogging again at his exquisitely designed site [EDIT: dead link].

Which reminds me that (a) I need to work out CSS and make this site look nicer and (b) I must update my sidebar of links; it’s a mess.

Dave continues to talk about X-Men, with a look at my favourite story from Grant Morrison’s run on the New X-Men, which was so amazingly perfect in its execution, characterisation, story development, art and all round brilliance that the rest of the run, while wonderful, could never hope to match.

Jake has a well-supported treaty on the redundancy of Sue Storm [EDIT: blog is now for invited readers only] in the beginning of the Fantastic Four (and, therefore, evidence for how awful a writer Stan Lee could be) that goes to show how much good work John Byrne did on his run with the group (yes, there was a time when Byrne did good things).

Oh, and apparently there’s a trailer for some sequel that people seem to be excited about …

The recent discussion about masterpieces got me thinking about artists. I’ve always had a tendency to focus on the writing side, as the story is what really hooks me, but a great story is made even better with great art, so the hard-working artist should not be ignored. I have no training in art appreciation, so my favourite artists can be summed up in the words of the Monty Python sketch: ‘I don’t know much about art, but I know what I like.’ My selection is based on the comics I have read and books I have bought and the emotional weight of long runs and a set of aesthetics that even I’m not sure I can fully describe.

With this in mind, you can take whatever I say with a pinch of salt. I’m going to split up my favourite artists into three groups:
1. Artists who I really dig but aren’t on my top list.
2. Artists who are good and have made me go out and buy their stuff, even if I haven’t kept it.
3. My top five favourite artists.

Today, the first group: artists I really dig who aren’t on THE list. Let’s tackle this alphabetically. 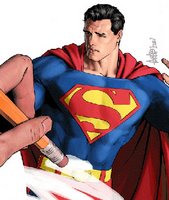 Gene Ha
His exquisite artwork is so nice to look at, I can barely believe that it has been done with pen and ink. I like the mixing of a modern feel with sense of classical in his work, and the smooth, sleek lines. Apart from the occasional individual comic, such as a Starman or Global Frequency, it has to be his work on Top Ten, particularly The Forty Niners, that is stand out in my collection, even though I’m posting a scan of a Superman cover.

Tony Harris
He is in for his funky lines and cool styles on Starman. His Ex Machina is good, but the ‘young guy proving his ability’ vibe in the early Starman is just so damn good. When he wasn’t doing Starman, it just didn’t feel right. The other projects he has handled in between these two series haven’t grabbed me in the same way, hence his position on my completely biased list.

Adam Hughes
He draws beautiful cheesecake, even if that isn’t what he wants to necessarily do. It just looks so good. I could fill the blog with the multitude of covers he has done, which start at gorgeous and escalate to amazing, so it’s a shame he doesn’t do as much inside the comics. Of the most recent, the accompanying Power Girl cover just sums him up; lush, powerful, stunning, cheeky, implausible, and art that just strokes the retina and tickles the cornea. My collection has Gen13: Ordinary Heroes, the Bwa-ha-ha Justice League run, and Star Trek: Debt of Honour.

Frank Quitely
This might seem an unusual position for Quitely, as he is one of the most stunning artists working in comics at the moment. However, his attention to detail means that he hasn’t produced a sufficient body of work to make him a main contender. His unique art style, with the elongated anatomy (especially the long legs), big jaws, unusual sexuality and fantastic pop art design mean there is nobody like him, even if he isn’t perfect or a believer in deadlines. Still, my collection is richer for his stylings on Flex Mentallo (probably my favourite), All-Star Superman, New X-Men, JLA: Earth 2 and the wonderful We3.

Mike Wieringo
I’ve always liked the cartoony yet muscular style of Ringo. His work on The Flash with Mark Waid just worked so well, especially for one so new to the biz, and the mix of curves, a cartoon-strip relaxedness and the kinetics of superheroics was a style I’ve always looked out for ever since. The runs that help to make my collection include The Flash, his pairing with Waid again on The Fantastic Four, and his co-owned project, Tellos, which was utterly charming and enjoyable, made moreso by his pitch-perfect art for the story, mixing a child-like (not childish) quality with the soaring imagination of fantasy.

Hopefully, work next week will allow me the opportunity to talk about the next group – the artists who make me buy their stuff (but still not my ultimate favourites).