DC solicitations for September can be found here.

I thought I’d try something different, and point out a handful of interesting new things from the massive listing of new product from DC, rather than go through the whole thing in detail. 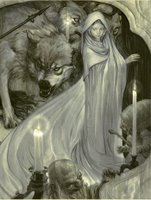 Bill Willingham tells a collection of short stories, in the parameters of a Fables riff on Arabian Nights, illustrated by a host of brilliant artists (including the cover artist, James Jean). Fables has been consistently entertaining and enjoyable, so this is an essential purchase. However, I am not a particular fan of hardbacks (I’m weird), so I might have to wait for the inevitable soft cover, but $19.99 for 144 pages of quality comics is not a rip-off. I’ll have to wait a long while, as this is advanced-solicited for October.

The League of Extraordinary Gentlemen: The Black Dossier (HC)

Another advance-solicitation, this is the pick of the bunch. Alan Moore and Kevin O’Neill bring us 208 pages of the LOEG in a single graphic novel, rather than the six-issue series previously. It thematically links to the Fables HC, as it uses the story as an excuse to tell more stories, as Mina Murray and Allan Quatermain read the Black Dossier of the title for answers to help them save the day, a book detailing the hidden history of the League. This will undoubtedly be more brilliance from Moore and O’Neill, with lots of extras to make the purchase worthwhile. My hardback idiosyncrasy may be in trouble, as I don’t know if all the extras will be maintained in a soft cover, especially the hilarious thought of a Tijuana Bible insert. $29.99 gets you a huge slab of comic book genius.

Two words: Grant Morrison. That’s all the reason I need. It helps that it is drawn by Jim Lee, one of my favourite artists, but it’s the thought of Grant doing his thing on an ongoing superhero franchise with little baggage. I’m giddy with glee at the thought of what he could come up with; I’m so looking forward to it, I can ignore the dullness of the cover. Hopefully, the interiors are more snappy. The only negative will be the bimonthly schedule, but Desolation Jones does okay with the same schedule (and what schedule does Planetary call itself? Annually?), so I can wait for quality.

Howard Chaykin writes a 6-part Justice League story, Sacred Trust, starting in issue 26. I can’t recall Chaykin writing the Justice League before, but I am no historian. Seeing his twisted sensibilities on the JLA seems bizarre, but intriguing at the same time. In an ideal world, he would draw the series as well, but I’ve no complaints with Killian Plunkett on pencil duties, who has a wonderful style and energy to his work. I shall no doubt buy this in the trade format, because that’s the kind of penny-pinching, pamphlet-killing sod I am, but mention must be made for it now.

Warren Ellis talks primarily about Desolation Jones in this interview [EDIT: dead link] at Newsarama. However, it turns into a chat about studying the comic page in order to tailor his story to the artist’s strength – in one paragraph, he just nails the qualities of some of the artists he has worked with (Cassaday, Robertson, Doran, McNeil) so perfectly, it’s spooky. It’s fascinating stuff, giving a great insight into his working process and into the understanding of creating comic books. This awareness and appreciation of what he does is one of the reasons why I enjoy Warren’s work; this post on his website talks about his thinking regarding the writing of a half-hour pilot for a new television series he has created, and it’s also a indispensable insight into the creative process.

In a similar vein, this interview [EDIT: dead link] with Scott McCloud in the Webcomics Examiner (found via Scott Kurtz), is primarily to talk about his new book, Making Comics, but also talks about the different forms of creator (the Classicist, the Formalist, the Animist, and the Iconoclast) that is fascinating reading. McCloud’s Understanding Comics is required reading for anyone interested in the way comic books communicate their ideas, and it looks like this new book will find a place on my shelves due to its requisite status.

Newsarama gets a big mention, among some big names, as one of Entertainment Weekly’s top entertainment websites. I’ve always had a preference for CBR, but that doesn’t mean I’m a CBR zombie to Newsarama’s detriment. Congratulations to the team for making the list, and keep up the good work. 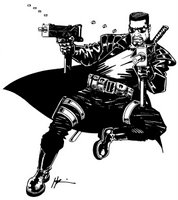 Talking of CBR, this news item tells me why Chaykin won’t be able to draw the JLA story: he’s drawing the new Blade series. The sketch is pretty damn cool, as any sketch from Chaykin would be, and it makes me seriously consider picking up the book just for the art, even though I have no special affection for the character, or know anything about the writer.

Reading The Guardian For A Week