My brain is not up to the Herculean task of writing novel content (although I don’t think that Hercules ever wrote anything, probably because he was quite stupid, and only up to doing the physical tasks to make up for the bastard he was, but anyway …), so some links and pictures are the order of the day.

Ambush Bug and the Bwa-ha-ha Justice League converted me to the cult of Giffen, so the thought of a creator-owned, superhero-mocking comic in the same vein, Hero Squared, would be right up my street. However, it didn’t click for me; I don’t know if it was the art, which can’t compare to Maguire’s talent for the sitcom, or the fact that it’s not playing on established ideas, or if it’s just the presence of the servile lackey of the villain who is just there was for stupid mockery and exposition (the L-Ron schtick was the only thing that really didn’t work for me in the JL days). I am entitled to my opinion, as this is my blog, and you are entitled to yours. If you haven’t, then there is an entire issue of Hero Squared previewed for free over at CBR to help you make up your mind.

Neil Gaiman talks about the new mini-series, The Eternals, over at Newsarama, which is an interesting look at how the project came about, and Gaiman’s thoughts about the story ideas and his feelings about the original books and what he wants to do with this series. I have no emotional connection to The Eternals, although I do want to read new comics from Gaiman, so I’m in a bit of a dilemma regarding my purchase of it. I’m not sure if this is a book that I will enjoy, without the benefit of previous experience of the Jack Kirby creation, or the John Romita Jr art which will be aping the scope of The King’s vision. However, I would definitely buy it if the art looked like the preview scan on the right, which is simply gorgeous.

Talking of images, I’m going to post this stunning Alan Davis picture of Dr Strange, which is something to do with Stan Lee writing Strange again – I don’t want to read the overwritten nonsense of an elderly Lee, but I will drool over Davis artwork (discovered via Neilalien, THE source for all things Strange): 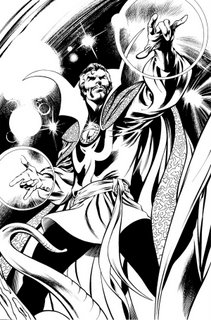