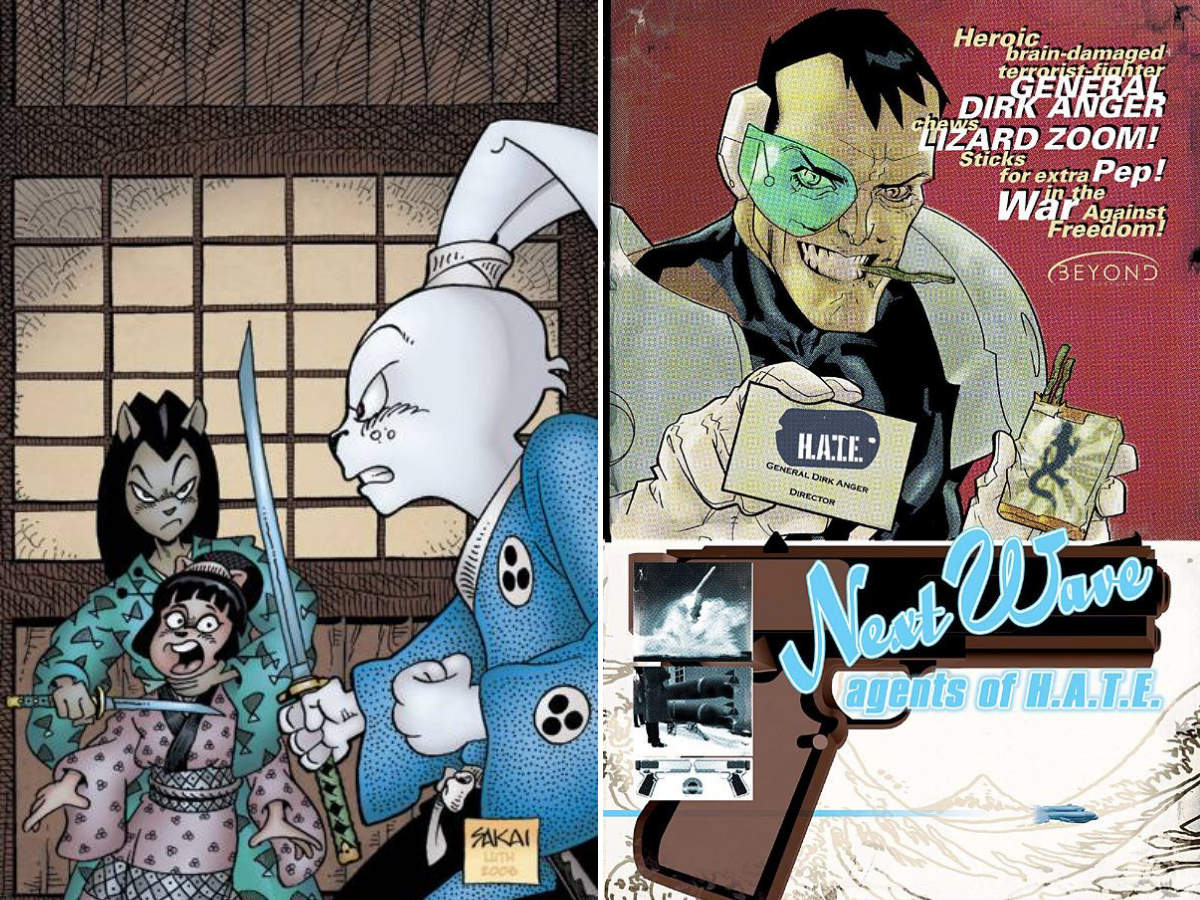 Usagi Yojimbo #94
I don’t have it in me to do Comics Activisim but, if I did, I would do it for Usagi Yojimbo. I have been a fanatic for the rabbit bodyguard since I discovered him sometime ago. I buy the singles, but also buy the trades as well, because it is just that good. According to ICv2.com, Usagi Yojimbo only made it to number 202 on the top 300 comics sold in April 2006 (just above PvP, another black and white comic I buy), selling just shy of 6000 copies. I think this is a terrible shame; the book is one of the satisfying comic book experiences, with great characters, wonderful stories and art that is deceptively brilliant. It is a book that can be given to someone who doesn’t want to read about the spandex set, and doesn’t rely on years of continuity to be able to understand it (although there is greater subtext if you have been lucky enough to be reading it). My girlfriend and I both eagerly await the latest fix, and hope that Stan Sakai keeps telling Usagi’s story for years to come.

Supergirl and the Legion of Super Heroes #19
This series has been a bumpy ride, especially in the middle, but the input of Supergirl has been a great shot in the arm for the book. If they could get either Barry Kitson to stay on schedule (he and Mark Waid work well together) or just get an art team that maintains the visual element from month-to-month, it could be something special.

PvP #27
I haven’t been enjoying the recent Shecky storyline in the online strip, but that doesn’t stop my overall enjoyment for the series. Apart from the price difference, there isn’t much difference between the singles and waiting for the trade, as the comic book already collects strips from the website, effectively making it trade of sorts.

New Avengers #21
Due to circumstances beyond my control, I wasn’t able to get to the shop for last week’s haul, which had some sweet books in it, including the last issue of this title in fact. To make up for it, I’ve been cracking into the recently purchased back issues of this book (I’m still missing #7 and #12), and finding that it’s quite a good little read. It probably helps that I’m not an Avengers fan of old, so Brian Michael Bendis is able to tell a superhero team tale (with a very odd assortment of characters, it has to be said) with a bit of SHIELD stuff thrown in, drawn by some nice artists. I hope to review them soon, after I’ve finished reading them all, which will also mean that I will be up-to-date enough to be able to read this issue, drawn by The Man, Howard Chaykin.

Nextwave: Agents of H.A.T.E. #6
Explodo. Comedy. A soundtrack of mad giggling and bemused fanboys. This what I want from my monthly fix of mainstream comics; fun stories, engaging characters, cool dialogue and funky art. Bring on the purple pants!

Runaways #17
So, there’s a death coming up in the book, which I hope will bring back some of the spark that has been missing in this book for me of late. I don’t want Brian Vaughan to use death regularly (Alex’s death was quite a shock in the first season), so I hope he isn’t falling back on old ideas, but he has a knack for doing things a little different, so there is optimism.

X-Factor #8
Although I will admit to having a soft-spot for Peter David’s use of characters from his previous X-Factor days, I still enjoy this book for what it is, the Marvel mutants’ version of the TV show Angel. If they could decide on a regular artists, I would be even happier (ideally, it would be Ryan Sook but, as that isn’t going to happen, I’ll take Ariel Olivetti after the good job he did on last issue). Last issue was also enjoyable for seeing what Singularity Investigations is all about, so I hope that David keeps up the momentum.