Today, in my series about comic book artists, I’ll be talking about Gary Frank, an artist on my list of favourites just outside my top 5. Like a lot of people, I discovered Frank’s art when he did a two-year run on Peter David’s Incredible Hulk (between #401 and 425) back in 1993. It wasn’t his first work (he started out doing work for Marvel UK on Motormouth & Killpower and Dark Angel) but he seemed to be fully formed as an artist straight off. That’s not to say he hasn’t got better as an artist in the intervening years, just that he seemed confident and strong in his style and storytelling in his first major work on a US superhero book. Especially as he was following fan-favourite Dale Keown on the run that made him ‘hot’.

Over the next few years, he did various books (including a run on Gen13 with John Arcudi) before becoming the artist on Peter David’s revamp of Supergirl (is that series even part of continuity any more?). They already had the dynamic of a writer and artist in sync with each other, and Frank had proved he could do emotions and humour with the Hulk, so it was a good match, and Frank was able to draw a teenage girl that was actually recognisable as a teenager. 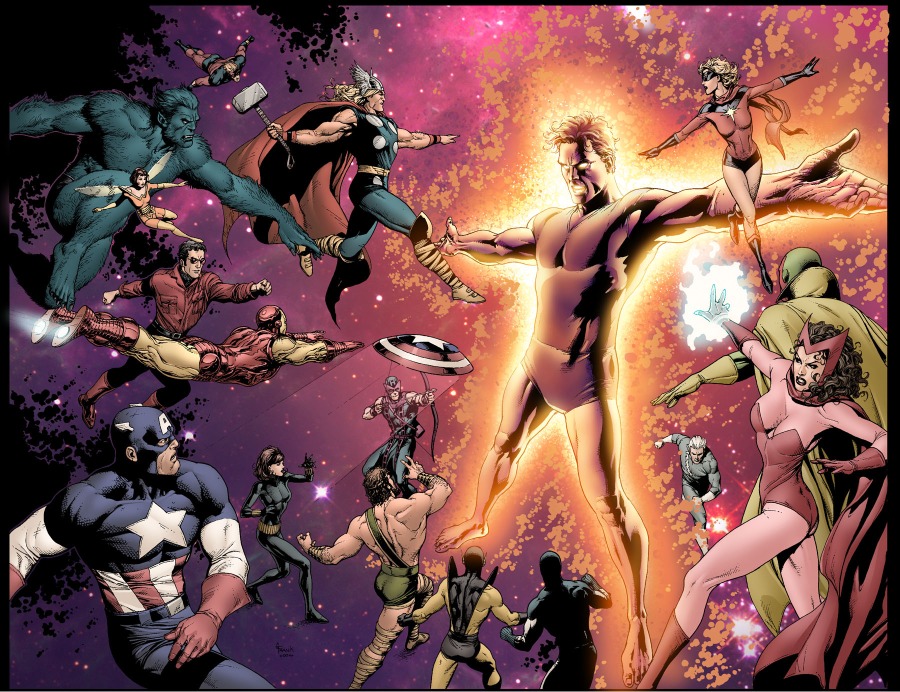 Although he still did work for DC after this run, his next contribution was to the world of creator-owned properties, when he wrote and drew Kin, a six-issue limited series about a secret government agency discovering the existence of Neanderthals in Alaska that wants to steal their technology (because Neanderthals have larger brains than Homo sapiens and are stronger as well). I enjoyed it, and would have liked to have seen more from Frank, who proved he could write as well as draw.

The connection with Top Cow (who published the trade paperback of Kin) seems to have led to the step that started Frank on the path to his current superstar status, when he was paired with J Michael Straczynski on Midnight Nation, a 12-issue limited series about a police officer who has to go on a quest to find his soul when he becomes a ‘Walker’. This led to Frank being the artist for when JMS revamped the Squadron Supreme in the MAX series Supreme Power, which had an adult take on the concept of the superhero and the scope to deal with that in the adults-only book. This first series lasted for 18 issues before it was decided, after two mini-series that Frank didn’t draw, to restart the series as a non-MAX book and call it Squadron Supreme. However, this series only lasted for seven issues before JMS left, and the team wasn’t brought back until the Ultimate Power crossover.

With the abrupt and bizarre end to Squadron Supreme, Frank needed something to keep him busy on his Marvel exclusive contract – he did covers and even worked on the Incredible Hulk again – but he decided to take up a DC exclusive contract when the Marvel one ended in 2007 and he became the defining Superman artist of the moment when he joined Geoff Johns for the Superman and the Legion of Super-Heroes story in Action Comics and the Braniac story after that. There is also the World of Krypton storyline and he will be the artist on the supposedly definitive Superman Origin story, again with Johns, and he seems to be going from strength to strength. This is great news for someone who has enjoyed his art since the early days, and not just because he is a British chap.

Frank has a clean and strong style, in the tradition of the classic modern superhero artists (going back to Neal Adams). He draws superheroes as they should be drawn (or as I believe they should be portrayed) – noble, beautiful, aesthetically pleasing, clear, unfussy. He serves the story well, not needing to insert unnecessary pin-up shots to sell later. Not that he’s not capable – he’s become quite the sought-after cover artist due to his strong compositions and iconic feel to his work. Unfortunately, he doesn’t have his own site (how very old-fashioned), so you can find out the full list of his work here [LINK] and more of his art at the Comic Art Community [LINK].